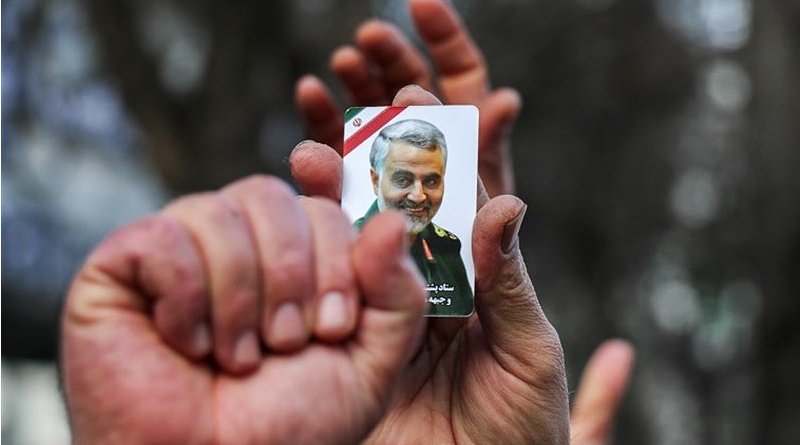 Major General Qassem Soleimani, commander of the elite Quds Force of the Iranian Revolutionary Guards Corps (IRGC), was killed in an American drone strike at Baghdad Airport on January 03, 2020. General Soleimani was a senior and popular military figure in Iran. He was the architect of Iran’s military expansion in West Asia (or the Middle East) through the creation and sustenance of armed militias that acted as Iranian proxies. Through Hezbollah, for example, Tehran has been able to exert significant influence in the Lebanese politics. Likewise, the Quds Force was behind the creation of Hashd al-Shabbi or Popular Mobilisation Force (PMF) in Iraq, which was not only instrumental in defeating the Islamic State of Iraq and Syria (ISIS) but also played a key role in establishing Tehran as an invincible political and military force in Baghdad. In Syria too, the Quds Force was actively involved in arming and training Shiite militias, who fought along with Hezbollah to defeat ISIS and the Syrian opposition.

The IRGC is also credited with aiding and supporting Houthi rebels in Yemen and Hamas as well as Islamic Jihad in the Palestinian territories posing grave security threats to Saudi Arabia and Israel, two key regional allies of the United States (US). Through these proxies, Iran was able to challenge the US military dominance in various theatres in West Asia.

While the US and Iran have been at loggerheads for over four decades, tensions have sharply risen under the Donald Trump Administration. Trump was a vocal critic of Iranian policies and its nuclear programme even before his election in November 2016. In May 2018, he withdrew from the Joint Comprehensive Plan of Action (JCPOA) signed between Iran and P5+1 (representing five members of the UN Security Council plus Germany) and re-imposed economic sanctions on Iran. Since then, the situation in the Persian Gulf has been on the boil with several tit-for-tat actions raising the chances of a direct military confrontation.

In June 2019, the US and Iran were on the verge of war after Iran shot down an unarmed US surveillance drone over the Strait of Hormuz. At the time, President Trump had remarked that the US decided to desist from military action only at the last minute considering the disproportionate casualty Iran would have suffered. In a series of tweets on June 21, Trump said “We were cocked & loaded to retaliate last night” and decided to stop only “10 minutes before the strike” after getting to know that nearly 150 Iranians will die in the process which would not be “proportionate to shooting down an unmanned drone.”1

The situation again come to a head in September 2019 after the drone attacks on Aramco oil processing facilities in Khurais and Abqaiq in Saudi Arabia. Though Yemen’s Houthi rebels had claimed responsibility for the attacks, both the US and Saudi Arabia blamed Iran for targeting the Saudi oil installations. Again, President Trump had tweeted that the US is “locked and loaded” and that it will “work something out” with Saudi Arabia to device an appropriate response.2 Trump had then authorised the use of the US emergency oil reserves to ensure stable global supplies and issued new economic sanctions against Iranian financial agencies.

The current escalation is largely a result of the simmering situation in Iraq since October 2019. Iraq has witnessed a series of protests against corruption, ineffective governance and economic hardships as well as Iranian and American meddling in government and politics. The protestors had on more than one occasion targeted the Iranian consulates in different Iraqi cities including Najaf and Basra.3 Reports suggest that over 500 Iraqis have lost their lives due to action taken by police and PMF against the protestors in 2019.4 To counter popular discontent against Iran, Kataib Hezbollah, an Iran-backed Iraqi Shiite militia, had organised a protest in Baghdad which culminated in the attack and arson at the US Embassy on December 31.

The US blamed General Soleimani of authorising the attack on its embassy. It also revealed that the decision to eliminate Soleimani was taken in order to neutralise an imminent attack on the US interests that he was planning.5 The statement issued by the US Department of Defence noted that Soleimani was “actively developing plans to attack American diplomats and service members in Iraq and throughout the region” and that “this strike was aimed at deterring future Iranian attack plans.”6 For his part, Trump stated that “General Qassem Soleimani has killed or badly wounded thousands of Americans over an extended period of time, and was plotting to kill many more” and that he “should have been taken out [killed] many years ago!”7 US Secretary of State Mike Pompeo too said that “There was an attack that was imminent that could have killed dozens or hundreds of Americans. We found an opportunity and we delivered … we took him off the battlefield.”8

Soleimani’s killing has evoked angry reactions from Tehran and Baghdad. Many senior Iranian and Iraqi leaders have condemned the American strike and have called for avenging Soleimani’s death. While announcing a three-day mourning, Iranian Supreme Leader Ayatollah Ali Khamenei said that the General was martyred in the service of Iran and Muslims and that “harsh revenge awaits those criminals who have tainted their filthy hands with his blood.”9 Khamenei also called an extraordinary meeting of the Supreme National Security Council to review the situation after the US strike. The outpouring of public angst against the US action on the streets of Tehran, Mashhad and Ahvaz during Soleimani’s funeral procession indicated the popular sentiment prevailing in Iran. Iranian Foreign Minister Javad Zarif tweeted that “The US bears responsibility for all consequences of its rogue adventurism.”10

On January 08, Iran attacked important US military bases in Iraq. Khamenei termed the attack as a “slap in the face” of the US. Zarif, however, was more circumspect when he tweeted that Iran took the action in “self-defense under Article 51 of UN Charter” and that “we do not seek escalation or war.”11 After initial speculations about casualties, it became clear that the missile attack did not lead to any American or Iraqi loss of life. President Trump stated that “Iran appears to be standing down, which is a good thing for all parties concerned and a very good thing for the world.”12 Their statements seem to underline that both parties wish to avoid a full-blown war at the moment.

However, this does not indicate cessation of hostilities. Both the US and Iran have the ability to indulge in covert activities to harm each other’s interest. Tehran can use its proxies in Iraq, Syria and Lebanon to mount attacks against the US military personnel and installations in the region. Kataib Hezbollah (KH) and other Shiite militias can start insurgency within Iraq to harass the US forces there, especially since their deputy commander Abu Mahdi al-Muhandis too perished in the attack that killed Soleimani. The KH has launched rockets targeting the US Embassy in Baghdad and the al-Balad airbase nearby, housing the US Air Force personnel, though this also did not lead to any casualty.

In the long term, Iran might push for the complete ouster of the American military from both Iraq and Syria. On January 05, the Iraqi Parliament passed a resolution calling “to end the presence of any foreign troops on Iraqi soil and prohibit them from using its land, airspace or water for any reason.”13 Iran, however, will be cautious in choosing an all-out war given its vulnerabilities against the US military might.

Soleimani’s killing is the culmination of a series of events that began with the US withdrawal from JCPOA and re-imposition of unilateral sanctions on Iran. The US and Iran have been engaged in an intense geopolitical rivalry, but so far both had largely acted through proxies and regional allies. Iran is the only regional power that resists American military dominance in West Asia (or the Middle East). The incidents of the past year and a half underline that the US and Iran are heading towards greater confrontation, and General Soleimani’s killing is the clearest indication so far.

*About the author: Md. Muddassir Quamar is Associate Fellow at Institute for Defence Studies and Analyses, New Delhi