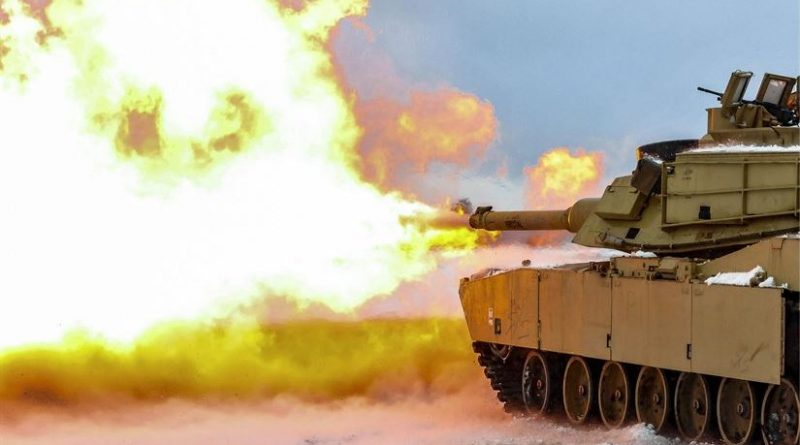 U.S. soldiers fire a live round from an M1A2 battle tank during an accuracy test in Swietozow, Poland, Jan. 16, 2017. The soldiers are assigned to the 4th Infantry Division's 1st Battalion, 68th Armor Regiment, 3rd Armored Brigade Combat Team. The unit's arrival marks the start of rotations of armored brigades in Europe. This rotation will enhance deterrence capabilities in the region, improve the U.S. ability to respond to potential crises, and defend allies and partners in the European community. Army photo by Staff Sgt. Micah VanDyke

Yesterday’s problems haven’t changed with a new US president, Brexit moving toward completion, or the Chinese and Russians taking a larger geopolitical role on the world stage. If anything, things are getting worse not better, and no country or alliance wants to step up and deal with the issues plaguing geopolitics. This isn’t a morbid essay, but a realistic look at careening events on the world’s geopolitical-stage.

The Russians are again on the move in Ukraine and the Artic in their biggest repositioning since the Cold War. Russian separatists in Ukraine started making these moves in light of President Trump wanting better relations with Putin. But that hasn’t stopped the Kremlin from destabilizing Ukraine.

Thae Yong-ho, one of the highest-ranking officials in the North Korean government to ever defect, ardently believes Kim Jong-un would attack the U.S. with nuclear weapons if his regime were on the brink of failure. Mr. Yong-ho further elaborated the North Korean leader lives a secretive, isolated life that includes no one having the location of where he even lives. Kim Jong-un is further painted:

“His ability to wreak harm should not be underestimated. If his very survival were threatened, he would lash out and destroy whatever he could and once there was an effective nuclear arsenal, the leader would be prepared to use it.”

Mr. Yong-ho seems to be iterating that nuclear weapons are the only guarantee Kim Jong-un has outside of China protecting its proxy.

In late January, Houthi militants controlled by Iran killed three crewmembers and injured three others in an attack on a Saudi frigate on patrol west of the Hodeidah port in Yemen.  The attack, which is the third carried out on Saudi-coalition ships in the past six months, was actually intended for U.S. warships patrolling the area.  Also in Yemen, Houthi militants killed an American commando who was put in place as part of the first counterterrorism operation authorized by President Trump. Following these offenses, the U.N. is scrambling with the Saudis to monitor a fragile ceasefire that is continuously being violated by the Houthis, who now control Yemen’s capital.

The above actions have prompted President Trump to realign the U.S. with the Saudi-led coalition by promising to enforce the Iran nuclear deal and counter Iranian aggression. U.S. officials further confirmed:

“Tehran test-fired a medium-range ballistic missile on Sunday that violates a U.N resolution passed last year after the nuclear agreement between the P5 + 1 and the U.N Security Council.”

Iran’s provocations caused Trump’s National Security Advisor, Michael Flynn, to put Iran ‘on notice.’ U.S. surveillance satellites detected the launch that flew 600 miles, but Tehran insists it was not illegal since it did not carry nuclear warheads and is not part of the agreement.  Iran’s recent actions reflect the 2016 remarks of Iranian defense minister Hossein Dehqan, who then stated that the missiles would go into production, defying both the U.N. and the spirit of the nuclear agreement.

What this means for balance of power in the region, deterrence that includes NATO or not, along with other nations joining this renewed commitment to check Iranian influence wasn’t spelled out.

And since nothing is being done to check Iran’s hegemonic march in the Middle East, a new Iranian ‘axis of resistance’ has risen according to Foreign Affairs. Tehran has also defied Article 49 of the 4th Geneva Convention and begun transferring Sunni populations from Syria, Lebanon and Iraq, and replacing them with Shia, who are friendly to Iran. This was a popular tactic used by the Nazis in World War II (WWII).

This Iranian ideology has evolved from being crushed by sanctions a few years ago to a state-centered enterprise with military and industrial-means gaining traction along, with the will to engage enemies. This transnational project, supported by organic proxies, has morphed into networks of popular armed movements across the Middle East. The Levant-crescent that starts with Iran encompasses Lebanon, Syria, and Turkey to some extent, along with the acquiescing Russians playing the role of military-industrial supplier to an Iran that is now flush with post-sanctions economic resources. Hamas, Hezbollah, and the Shia militias who were once crushed or irrelevant, will now have to be taken on by nation-states with considerable military resources and the will to fight.

In further military decisions abdicating Iranian civilian politicians, Iran appointed Brigadier General Iraj Masjedi, senior advisor to IRGC-Quds Force Chief Qassem Soleimani as its ambassador to Iraq in early January. According to the Foundation for the Defense of Democracies research analyst, Amir Toumaj, “This shows Iran’s commitment to ensure that its political and military influence will continue to dominate its western neighbor.”  Iran has also increased influence in Lebanon by having Hezbollah take over the country’s presidential election and get its candidate, Michael Aoun elected, ensuring Iran effectively controls Lebanon.

Who has resources besides the Americans, Europeans, and NATO to check the Iranians, Russians, and now Chinese who have also made very provocative moves recently? Though the Chinese let it be known they were staying out of a renewed Russia-US nuclear arms race, that isn’t really the truth. However, China tested a new version of its long-range missile that is capable of carrying ten warheads. Further the South China Morning Post reported:

“China is stepping up preparedness for a possible military conflict with the U.S. over the South China Sea. The Chinese army believes the chances of war have become ‘more real’ amid an increasingly complex security situation in Asia.”

China, with the aid of North Korea, seems intent on turning the South China Sea into its own private harbor. Perceptions are reality and the possibility of a ‘conflict,’ or ‘war’ between the two great powers of our day has historical allies nervous about who to trust and which side to pick. The post-WWII order could be disrupted with one misplaced shot or a nervous pilot on patrol in East Asia.

Tackling all these challenges requires both economically and militarily dismantling both these entities, and the trend of growing terrorism as well. Unfortunately, the clock can’t be turned back on over a decade of feeble resistance, which has allowed smaller countries to thrive off chaos without repercussions. Now social support is also in place for a more muscular China, expansionist Russia, and ascendant Iran across their spheres of influence. Many of their combatants will die to keep power, but as an example of the other side’s weakness, would the Germans be willing, able or even capable of fielding an army to take on the Russians? While Germany may not be able to overcome their WWII sins, it’s doubtful the Japanese would suffer from that malaise.

Either the facts on the ground change or the means for credible engagement becomes harder each time an un-deterred geopolitical move on the world’s chessboard transpires. Freedom-loving nations must work pragmatically with hard and soft power to begin taking back the pieces that have been lost in the South China Sea, the Levant, Africa, South America and the Central Asian periphery that is being ignored. Russia working with the Taliban proves that Central Asia can’t be ignored any longer no matter how long nations have been at war in that graveyard of dynasties. Marginal pressure will yield failure and warlike conditions unless the old rules of the Cold War are brought back online. Diplomacy and statecraft are necessary tools, but will only yield the slowing down of evil, not stopping its forward progress. Setting false demarcation lines and managing the rise of China, Russia and Iran won’t work now that conflicts across the globe are raging from the Middle East to failed states in Africa. This new form of war – using proxies and obfuscation through their deaths on the battlefield – without paying a political price has to be met with international backing. Countries like Egypt, Vietnam, Columbia, and Mexico need to acknowledge these new realities and do away with historical vocal criticisms leveled at western hegemonic ambitions. Instead Shiism as a political entity, Russian worship of strength – whether Stalin or Putin – and China veering towards Maoism in the form of Premier Xi strengthening his power can only be met with foreign alliances, new and old.

The free world has a choice, either fight or be perceived as lacking any convictions, which means authoritarian regimes win. Washington is trying by scatter-shooting its way to re-engaging ‘special relationships.’ No one wants to admit or even believe that Russia, Iran, and China cause other bad actors like Sudan, Venezuela, and the emergence of authoritarianism in Hungary and Poland to be nothing other than believing placating evil. The solution is muscular deterrence backed by blue-water navies and divisions of NATO infantrymen. Failure by gradually conceding control of Western and East Asian coalitions to authoritarian Axis’ will come at a high cost.

Conflict resolution can be seen as a strength, and not a weakness, but the commitment to only seeking peace without military-deterrence will lead to protracted crisis or war. The choice is freedom-loving people and nations either stand up for human rights, backed by the will to fight, or consider a replay of WWII.

But this time with the technology that nations now possess we could truly witness the wars to end all wars. Let’s surmise hope against hope and believe that deterrence, balance of power, historical alliances, robust militaries and the post-WWII order stay in place by powers that have benefited from this relationship for over seventy years. They need to wake up and come to their senses, otherwise the consequences are difficult to imagine.

One thought on “Current Geopolitics A Recipe For War – Analysis”