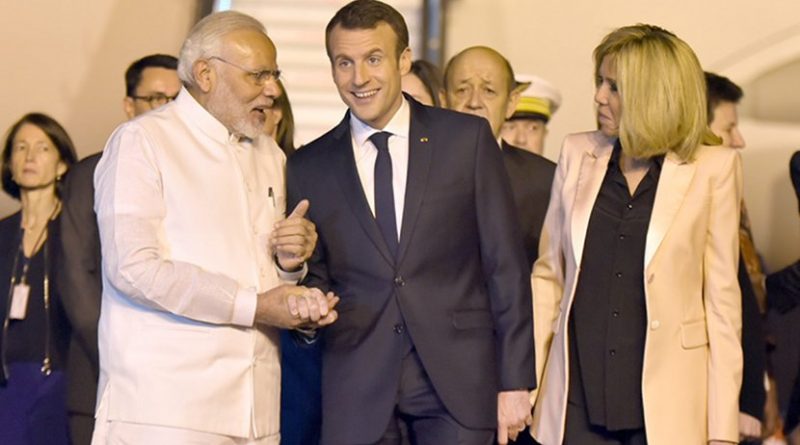 A major highlight of the visit was the founding conference of the International Solar Alliance.

“France wants India as its first strategic partner in Asia, and it wants to be India’s first strategic partner in Europe, and even the western world,” said French President Macron as the two countries inked 14 crucial agreements in New Delhi, signalling a “big leap” in the bilateral relations. Macron’s was an unambiguous gesture reflecting the deepening of strategic ties between the two countries. The comprehensive nature of the agreements covering defence, economic, nuclear energy and energy security, among others, was an indication of growing convergence between the two countries in the times of dispersed and diverse security threats with global balance of power under transition. Though India and France have maintained cordial relations since the cold war times, the potential of their strategic partnership appeared to have remained largely underutilised. The recent visit by the French President to New Delhi may well be considered as a major breakthrough in strategic ties between the two countries as they are responding to their convergence of interests like never before.

A major highlight of the visit, apart from signing deals worth $16 billion, was the founding conference of the International Solar Alliance (ISA), co-chaired by India and France, with the presence of the heads of state of 23 countries and ministerial representatives from 10 other nations. An idea mooted by PM Modi and enthusiastically promoted by France under then President Francois Hollande was an expression of the two democracies willing to shoulder the responsibility of a global problem when major powers were retracting from their responsibilities. The fact that India was one of the few developing countries to not only support the Paris accord, but also playing a key role in successfully negotiating the deal and working to promote the alternative sources of energy was well recognised by the Paris. The ISA is an excellent example that speaks of the willingness of the two countries in leading a global discourse and action in dealing with the climate change.

Modi and Macron also discussed broad range of bi-lateral issues, including terrorism. Apart from the customary condemnation of the terrorism, one of the major takeaway for India was the mention of specific terrorist organisations having roots in Pakistan like Jaish-e-Mohammed, Hizbul Mujahideen, Lashkar-e-Tayabba along with the terrorist groups threatening peace and security in South Asia in their joint statement. The specific references to these organisations implied the French recognition of Indian sensitivities with regard to crossborder terrorism and state support for the same.

The most significant takeaway, however, was the headway in the defence partnership with special focus on maritime security. The identification of ‘common threat’ was unambiguous when Macron said “a strong part of our security and the world’s stability is at stake in the Indian Ocean” and that “oceans cannot become a place of hegemony,” further pledging that “stability in the Indian Ocean region is very important for the stability of the entire region, and we are with India for freedom of navigation in the Indo-Pacific.” French interest in Indian Ocean Region is indeed intelligible. Despite possessing substantial overseas territories, including in the Indian Ocean Region, France has consciously maintained a low profile regarding its overseas islands. In the recent times, however, France has been increasingly active with the ‘oceanic concerns’ given its interests not only in the Indian Ocean, but also in the Pacific.

Identification of China’s growing assertiveness in the seas as a matter of concern may well be a dominating factor in France’s increased focus on these overseas territories. France has repeatedly assessed the growing presence of China in the Indo-Pacific as a possible impediment in its freedom of action at sea. Strong strategic ties with India to safeguard its interest in the IOR vis-à-vis China is certainly in the interest of France. France have accordingly been attempting to forge closer ties with India. Though there was hint of enthusiasm in the Indian response initially, it soon appeared waning due to domestic political realities during the UPA administration. The new government under PM Modi provided a great opportunity to reboot the strategic ties.

Modi government, which has shown an inclination towards forging and deepening strategic ties with countries of converging interests, was quick to reach out to France. Modi was among the first visitors in Paris after Macron took the office. Modi’s visit was soon followed by high level official visits from both the countries to finalise the contours of emerging strategic partnership and the outcome of which was the finalisation of the purchase deal for 36 Rafale air fighters. A significant aspect in India’s favour in the deal is that a large part of the production will now be in India. Along with that, six Scorpene class submarines will also be entirely built in India. This will provide a boost to PM’s Make in India programme in the defence production. However, the most significant outcome in the defence ties is the signing of the strategic defence pact between the two countries, providing for the use of each other’s military facilities.

The ‘LEMOA-like’ arrangement between India and France is extremely critical as it will help India in filling the strategic space, especially in the western Indian Ocean region, which is extremely critical due to the presence of major SLOCs. France has three critically located bases in the western Indian Ocean — Abu Dhabi, Djibouti and the Reunion Island. The reunion, strategically located between the Madagascar and Mauritius, houses one of the largest French Naval bases. The availability of these bases will surely help to strengthen the security architecture India is attempting to build in the region. In the eastern Indian Ocean, India is well placed with strong a base in Andaman and Nicobar islands. Apart from that, emerging alignments in the region like that of Quad and India’s deepening of strategic ties with countries like Vietnam, Japan, Australia and the US individually will further help to augment its capabilities in the eastern Indian Ocean. Now with the defence pact with France, along with the existing arrangements with Oman, Seychelles and Mauritius provides a solid base to expand Indian capabilities in the western Indian Ocean as well. The defence pact with France therefore is extremely critical.

China’s expansion in the Indo-Pacific has triggered unprecedented changes in the global order. The relentless rise of China is providing a natural push for countries like India and France to deepen their strategic partnership. Apart from that, the growing convergence of interests and the willingness to co-operate has brought the two countries closer than ever before. President Macron’s visit has thus solidified the base for a more entrenched strategic partnership between the two countries.

The author is Research Intern at ORF New Delhi.