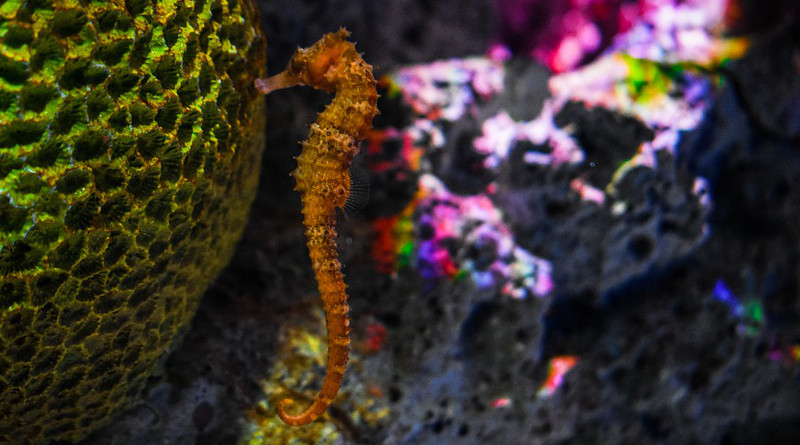 How the embryo develops in the womb is a complicated process, that is still puzzling today. In particular, it is unresolved how the paternal genetic information that is also present in the embryo, and the emerging body cells based on their mixed “blueprint” are tolerated by the maternal immune system and not rejected upon recognition as foreign.

While this process is now well understood in humans, pregnancies in the animal kingdom still provoke many unanswered questions. An international team under the leadership of the GEOMAR Helmholtz Centre for Ocean Research Kiel has intensively studied the unique male pregnancy in 12 species of pipefishes and seahorses. In some species, the males carry the eggs only on their trunk, in others they protect them by skin flaps or even placenta-like systems which supply the offspring with nutrients and oxygen.

“By comparing the genomes of pipefishes and seahorses, we discovered that in the evolution of male pregnancy, the immune system pathways responsible for self and non-self recognition have changed considerably”, explains Dr. Olivia Roth, from GEOMAR, first author of the paper which appeared in the Proceedings of the National Academy of Sciences (PNAS).

“Moreover, we detected that genes maintaining essential functions in female mammalian pregnancy, are also activated in male pregnancy. This suggests that pregnancy, whether male or female, relies on similar molecular mechanisms and that similar genes are altered in their function in the evolution of a pregnancy”, Dr. Roth continues.

In detail, the authors have investigated alteration of genes of the so-called major histocompatibility complex (MHC). The MHC is considered one of the most important innovations in the evolution of vertebrates. There are two types as cornerstones of the so-called adaptive immunity that eventually can cause memorized immunity, the MHC I and the MHC II pathway. Both also play a major role in humans, for example in the context of organ transplants and possible rejection reactions.

The results of the present study show that the fish family of seahorses and pipefishes underwent a dramatic modification of their immune system and lost the second arm of the adaptive immunity, the MHC II. In addition, analogous to mammals, during the male pregnancy of pipefishes and seahorses genes of the other pathway (MHC I) are also down-regulated, which further supports the tolerance of the embryo.

“A loss of one MHC-system does not sound dramatic for the layman, but in relation to an organ it would be like finding a new group of fish that can survive without a liver”, says Prof. Dr. Thorsten Reusch from GEOMAR, one of the senior authors of the study. “Many immunology textbooks now need to be modified”, Thorsten Reusch continues.

A similar loss, albeit completely independent during their evolution, had previously been reported for cod-like fishes. Yet, in contrast to cod, where it remains puzzling why the MHC II has been lost, the loss is in pipefishes and seahorses is associated to the evolution of the unique male pregnancy. Interestingly, the genes lost in the pipefish immune system are coding for precisely those pathways that are attacked by the human immunodeficiency virus (HIV).

“Pipefishes that survive without these critical immune system functions could become an important model system for the study of natural and disease-related immune system deficiencies”, Dr. Roth concluded.

Home » When Fathers Are Pregnant