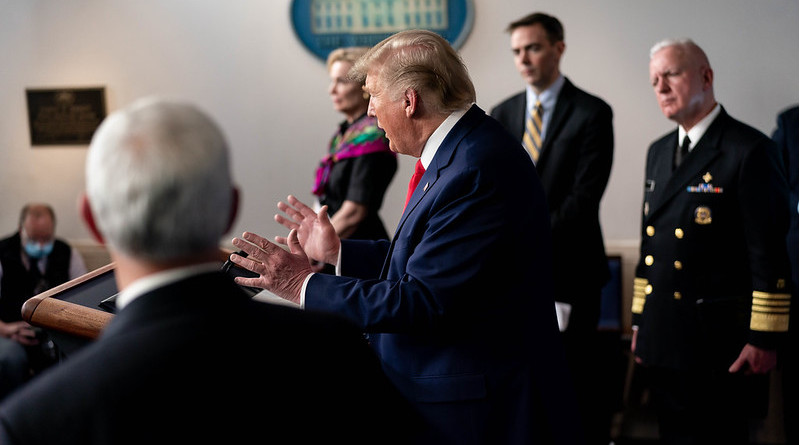 China and the US have different views on how the coronavirus originated, how it spread, and how it should be fought. These opposing narratives arise out of a context of ideological divide that will only be deepened by the crisis. Smaller states will have to decide which narrative they are going to accept, a trend that could widen existing gaps between the great powers and their allies.

The coronavirus pandemic is becoming a battle of narratives. Ultimately, the question of whether the virus’s spread was a product of human action or an accident might not matter very much. Whatever its origin, the pandemic has highlighted wide ideological differences between the democratic West and non-democratic China. On a broader level, the democratic West now stands more starkly in opposition to non-democratic Asia.

Opposing ideological visions are a hallmark of great power competition. The ancient Greeks, the Romans, the Arabs from the seventh century, the Byzantines, and, later, the great European colonial powers often cast their foreign policy in ideological terms. The US has a long history of viewing conflicts with opposing powers through an ideological lens. By establishing that a position occupies the moral high ground—by being on “the right side of history”—a government can mobilize industries, focus the attention of political elites, and gather allies to support the cause. America’s powerful military and robust economy were of course critical to defeating the Soviets in the Cold War, but it was ideology that energized the US to push on toward its decisive victory.

Ideology is an inseparable part of any great power competition, and the US-China rivalry is no exception.

There are several components to the growing US-China rivalry. There is a military dimension: expansive Chinese military capabilities, both on land and at sea, are undermining the concept on which US power has depended since WWII. In parallel, China is taking on the US on the technological front, which has long been a pillar of US superiority. China’s recent successes in telecom and computing question the premise of American technological infallibility. The economic side is even more revealing, as China already outstrips the US in many areas and is set to outdo it in the remaining sectors in the coming decade or so.

The last element—a clear ideological separation—was lacking, but is now quickly evolving as a result of coronavirus. US-China competition is now laid bare in all four crucial dimensions: military, technological, economic, and ideological.

The ideological component, which is where the battle of narratives lies, would eventually have taken shape even without the pandemic. Signs of this trend were present before it erupted, with the US taking every opportunity to criticize China on human rights issues, treatment of minorities, and debt-incurring policies toward its Asian neighbors. The problem of China’s treatment of its Uighur minority is a good example of Washington attaching ideological momentum to its growing disagreements with Beijing.

The ideological divide will grow ever more pronounced, especially with the exacerbating factor of coronavirus in the picture. Ultimately, we should expect the ideological competition and mutual mistrust between the two powers to increase to Cold War levels.

Both Beijing and Washington will scramble to lock in support from their allies. The ideological dimension of the conflict will force many states to choose a coronavirus narrative, which will mean choosing a side. This will lead to a further division of Eurasia into blocs headed by Beijing, Washington, or weaker states—like Russia—that will themselves be in league with one of the two powers.

The ideological dimension will also mean the prospects for ironing out existing geopolitical differences will be extremely dim. Any improvement will require either Washington or Beijing to give up geopolitical assets—a highly unlikely scenario.

Much will depend on which side will be able to amass more allies. In this regard the US possesses, and will continue to possess, an overwhelming advantage. The world’s largest democracies, which are also the world’s most prosperous states, are militarily, economically, and, most essentially, ideologically connected to the US. China will struggle to balance the US’s array of allies, and will likely turn to Russia to play a greater role. Moreover, territorial disagreements with many of China’s immediate neighbors will continue to limit its ability to project a new ideological model.

Beijing might find it has to clarify the thinking behind its flagship “Belt and Road Initiative” (BRI). China promotes it as a new vision of state-to-state relations, but it is also intended to be a mechanism for changing state systems.

So far, despite China’s intense efforts to control the coronavirus narrative, the ideological component favors the US. Though many are quick to point to recent transatlantic ruptures, it should be remembered that the divisions between the EU states and China are far greater. This was evident even before the outbreak of the pandemic. Differences with the US notwithstanding, Germany and France are not going to follow China’s lead, no matter how powerful its economy.