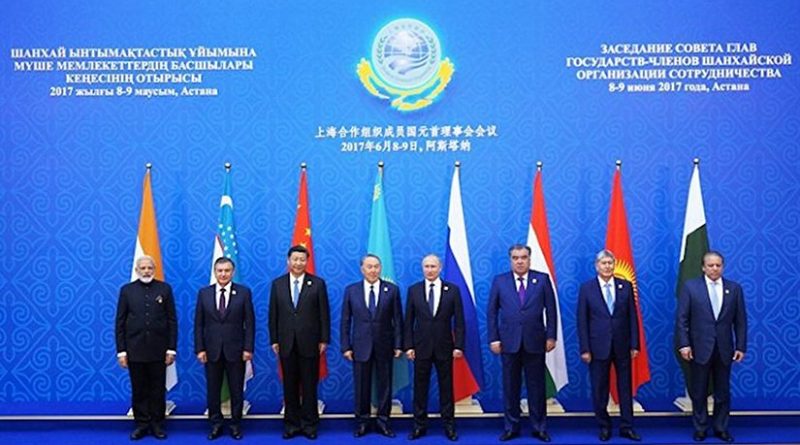 UN Secretary-General António Guterres has appreciated Kazakhstan for playing “an increasingly dynamic role on the international stage” as a non-permanent member of the Security Council, stressed the importance of the Shanghai Cooperation Organization (SCO) and urged it to show leadership on climate change.

Obviously delighted at the UN Chief’s participation in the SCO Summit, Kazakh President Nursultan Nazarbayev noted: “This is the first time in the SCO history the UN Secretary-General takes part in its work. And it is quite symbolic that it has coincided with the accession of two new members – India and Pakistan. It means that the organization is becoming the real political power in the international arena.”

In remarks to the Council of Heads of State of the SCO on June 9, Guterres said: “The 2030 Agenda for Sustainable Development and the SCO’s Development Strategy 2025 are our common blueprints,” adding: “Let me also make a special plea to all of you to show leadership and commitment in efforts to implement the Paris Agreement on climate change. We must keep ambition high.”

Guterres congratulated the SCO’s new members India and Pakistan, and declared: “Today’s summit marks a new phase in the group’s development, broadening both its scope and its impact on the world.”

He was in Kazakhstan not only to participate in the SCO Summit, but also to attend the opening of the EXPO 2017 that he hopes will be “a landmark in our commitment to sustainable development, especially in relation to something that is absolutely crucial in relation to climate change – that is, of course, the energy dimension.”

The SCO plays a valuable role in promoting mutual understanding, dialogue, stability and development across much of Eurasia, he said. Its members are working together to combat some of today’s key threats to peace and security, including terrorism, violent extremism, drug trafficking and organized crime. These are complex challenges that require a collective response, as no country can effectively confront them alone, the UN Chief noted.

Cooperation between the UN and SCO is based on “a solid foundation,” he said. This is especially important at a moment when the world is being tested on many fronts, as globalization and rapid urbanization are re-shaping the world. Major armed conflicts show little sign of ending.

“We are seeing mass movements of people in search of safety and economic opportunity. We are experiencing rising inequality and intolerance, as well as xenophobia and racism. And the impacts of climate change are accelerating by the day.”

Looking ahead, the United Nations will continue to be the SCO’s strong partner, Guterres assured. Since taking office in January, he has set in motion wide-ranging reforms aimed at strengthening the UN peace operations and making the international development system more effective.

Among those reforms is the creation of a new Office of Counter-Terrorism, with high-level leadership, which will aim to deploy the full capacities of the United Nations in supporting Member States in the struggle against terrorism and violent extremism.

Guterres pointed out that all members of the Shanghai Cooperation Organization had suffered from the scourge of terrorism. He said he would count on SCO members’ commitment to fight terrorism, address its root causes and ensure that approaches meet international standards of human rights. “Ultimately, inclusive and sustainable development is the best form of preventing armed conflict and violent extremism,” he argued.

In pursing that objective, the UN Chief pleaded for paying special attention to youth employment. “Democratic institutions that uphold the rule of law, and that provide peaceful channels for addressing grievances, are critical for progress and space for civil society, and free and independent media, are further ingredients for success. The empowerment of the women and girls is a priority that is very dear to my heart,” he stated.

In frank remarks to the press in Astana on June 9, Guterres said, the world body’s partnership with Kazakhstan was an extremely important pillar of its activity, both at the national, regional and global level, he said.

At the national level: supporting the people and Government of Kazakhstan in the implementation of the Sustainable Development Goals, in order to make sure that the country, with all its potential, with all its capacity, will be able to transform itself in one of the most developed economies in the world, doing it in a sustainable and inclusive way, protecting the environment and guaranteeing that no one is left behind and that both inequality and the problems of the environment are effectively dealt with.

“We are also here to support Kazakhstan in all its efforts to improve governance, the rule of law and human rights,” the UN Chief added. “Our partnership is essential at the regional level as Kazakhstan is the most important pillar of stability and development in Central Asia. We want Central Asia to be an area of peace and prosperity and for that, a lot needs to be done in the cooperation among the countries of Central Asia, and Kazakhstan can play a leading role in promoting that cooperation.”

The capacity to agree both on water resources, to agree on more effective capacity to deal with and fight terrorism, to have stronger solidarity between the countries of Central Asia in the perspective of sustainable development, are objectives that, Guterres believes, Kazakhstan will be pursuing very decisively and that the UN fully supports.

Explaining a strong partnership at the global level, the UN Chief said: Kazakhstan has been a symbol of dialogue, a symbol of peace, a symbol of the promotion of contacts between cultures, religions and civilizations; and with its presence in the Security Council, an extremely important dimension in mediation, in relation to conflict.

“On the other hand, Kazakhstan being a country vulnerable to climate change will need leadership on global warming to make sure that the Paris Agreement is implemented and that we are able to face this challenge and to tackle climate change.”

Following his visit to the Aral Sea, a lake lying between Kazakhstan in the north and Uzbekistan in the south, the UN Chief said in a statement on June 10 that seeing what was the fourth largest inland sea in the world almost dead had caused a tremendous shock. “This is probably the biggest ecological catastrophe of our time. And it demonstrates that men can destroy the planet,” Guterres said.

However, the Aral Sea’s progressive disappearance was not because of climate change, it was mismanagement by humankind of water resources. “But it also shows that if in relation to climate change, we are not able to act forcefully to tame this phenomenon, we might see this kind of tragedy multiply around the world,” he argued.

“So let’s use the Aral Sea as a symbol of how humanity can destroy the planet and let’s make it a lesson for us all to be able to mobilize the whole international community to implement the Paris Agreement – Governments, businesses, civil society, cities, States – in order to make sure that tragedies like the one I have seen in Uzbekistan will not be repeated.”