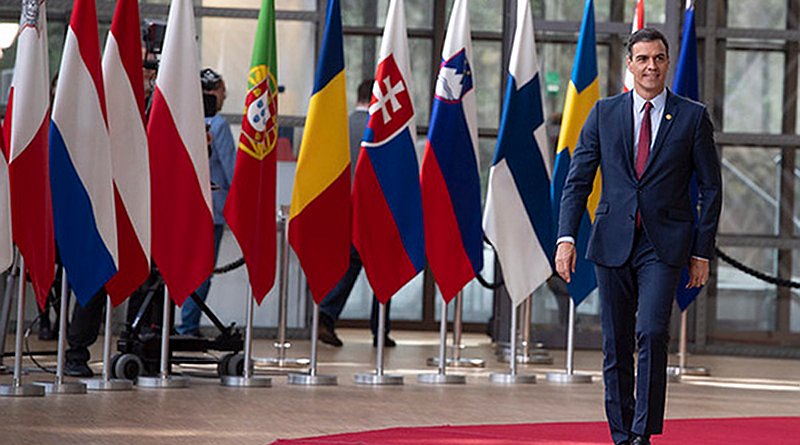 Spanish PM, Pedro Sánchez, arriving to the European Council for the informal dinner of heads of state or government in Brussels, 28 May 2019. Photo: Moncloa (CC BY-NC-ND 2.0)

Spain deserves a top job in the EU and Pedro Sánchez is determined to get it. For a country that is strongly pro-European and the fifth-largest (fourth, if Britain quits) economy in the Union, it is embarrassingly underrepresented. Since Javier Solana and Joaquín Almunia left Brussels, Spain has not had a high-profile politician in the European capital. At the depth of the crisis it even lost its seat on the European Central Bank (ECB) Executive Board with the departure of José Manuel González-Páramo, a loss only reversed in June 2018 with the arrival of Luis de Guindos.

The comparison with Italy is striking. Italians currently hold the Presidency of the ECB (Mario Draghi) and the EP (Antonio Tajani), and include the High Representative for Foreign Affairs (Federica Mogherini) and the head of the ECB Single Supervisory Board (Andrea Enria). That is quite a prize for a country that in recent times has shown very little enthusiasm for the European integration project.

Sánchez should play his cards wisely this time. After his good results in the last national and European elections (with 33% support in the latter, which translates into 20 MEPs) he has become the de facto leader of Social Democracy in Europe and, consequently, the chief negotiator of the Party of European Socialists (PES) for the Top Jobs. Therefore, the question is to know what Pedro Sánchez will do with his newly-acquired power.

There has been much speculation that Sánchez will side with Emmanuel Macron in trying to isolate Manfred Weber and the European People’s Party (EPP) and seek an alternative candidate. Sánchez is certainly keen to have a more progressive Commission, but it is not entirely certain that he will spend all his political capital on it. Ultimately, he knows that the CDU/CSU is an indispensable force to get things done in Europe. Hence, for Sánchez it is important to gain the trust of both Macron and Merkel.

The three constitute the sides of a double triangle. They are the leaders of Germany, France and Spain, the three biggest pro-integrationist countries and at the same time the de facto leaders of the EPP, S&D and ALDE. Under this configuration, Sánchez will defend the candidacy of Frans Timmermans, the socialist candidate, but also the Spitzenkandidaten method. There is strong backing in Spain for the latter process since it strengthens the power of the European Parliament, the main engine for an ever-closer union, and Spain’s mainstream parties are well represented in the key families.

If Timmermans ultimately fails to get the top job, Sánchez would be content with both Weber and Vestager as alternatives. Many believe that as Spain has no strong candidates for either the Commission or Council Presidencies, Sánchez will aim for the High Rep position and place his current Foreign Minister, and former EP President, Josep Borell, there. But this is not so clear. The feeling in Madrid is that the High Rep does not have enough influence in the Commission. Travelling leads to too many absences and, furthermore, when there is a significant foreign crisis, as in Syria or Libya, national Foreign Ministers of the big member states still call the shots.

For Spain, and for this government in particular, the biggest priority is deepening the Economic and Monetary Union (EMU) –which is seen as the core of the European project– so it is conceivable that Sánchez will forgo a Top Job for a Spaniard as long as he can snatch the Vice-presidency of the Commission in charge of economic and financial affairs. He is also likely to insist that the Vice-presidency be the first and cover all key DGs in the area, from the budget (DG BUDG) and fiscal issues (DG TAXUD) to economic governance (DG ECFIN and FISMA), trade (DG Trade) and industrial policy (DG Grow). In an era of geostrategic competition, this will become a powerful post.

Josep Borrell, one of the most respected politicians in Spain, with a PhD in economics and a strategic mind, could be a very suitable candidate for the position. The only problem is that he might be considered too heterodox by some of the northern countries. Should that be the case, Sánchez has another card up his sleeve: Nadia Calviño. The current Minister of Economy and former Director General for Budgets (DG Budget) has an excellent reputation in Brussels. She combines both determination for fiscal rectitude, sensitivity for social cohesion and zeal for competitiveness in a globalised world.

Apart from securing this strong Vice-presidency, Spain is also keen to have a greater presence and influence on the second-tier levels of Europe’s institutions. Getting the job of Secretary-General of the European Commission if Martin Selmayr finally needs to go would be an attractive proposition too. The next Spanish government will also make a strong effort to have Spanish officials in the cabinets of all the Presidencies of the three institutions and of key commissioners and in all the DGs and their units. The determination in Madrid is that influence needs to be built from the bottom up. Last but not least, Iratxe García, as a possible leader of the S&D Group, should be added to the list of persons of influence.

Ultimately, it is important to underline that Sánchez will not only seek influential posts but also insist on inserting progressive items on the legislation agenda. Although the priority will be EMU reform, more papers might be coming from Madrid focusing on strengthening the Union’s social pillar, developing a new green deal, designing a European industrial and innovation policy, strengthening the single market, generating a true ‘level playing field’ in global trade, better managing migration flows from Africa and increasing the EU’s capabilities in foreign affairs and defence. Should this come to pass, Spain would finally move from being mostly a passive to an active player in the EU.

Home » Sánchez Must Snatch The Economic Vice-Presidency For Spain – Analysis

Protests against Israeli Prime Minister, Benjamin Netanyahu, have raged on for weeks, turning violent sometimes. Israelis are furious at their government’s mediocre