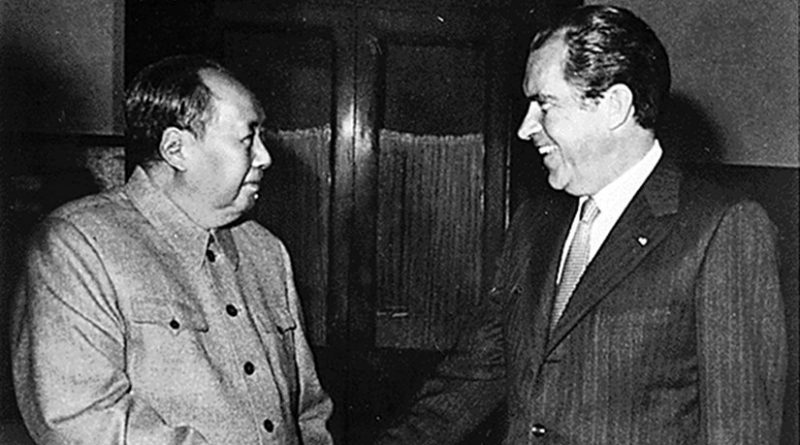 On July 16, U.S. President Donald Trump will once again come face to face with Russian President Vladimir Putin. This time it will be in Helsinki Finland. To say that the summit is highly anticipated would be an understatement. Much of the Western world is in a state of near perpetual consternation over this meeting. U.S. allies in Europe are fearful of what President Trump might agree to and how it will impact the current deteriorating trans-Atlantic relationships.

Domestic opponents to President Trump, in the grip of a near McCarthyite-like “Red Scare,” are also worried about the tete a tete. However, if President Trump plays his cards right, this could be the beginning of a much needed shift in U.S. foreign policy. It could act as the first chapter of a “Reverse Nixon to China” that could allow the U.S. to regain diplomatic leverage over its greatest 21st Century competitor, China.

Recall, that when President Richard Nixon and his national security advisor Henry Kissinger opened up relations with China in the 1970s, it was done in the context of needing a new lever in the Cold War, especially when the United States was still mired in Vietnam. The goal was for the United States to be closer to both China and the Soviet Union than either was to each other and to be able to swing back and forth between the two powers as needed depending on what the exigencies of the balance of power dictated.

At that time, China was clearly the lesser power and required bolstering. The reverse is true today.

In fact, Nixon himself began to question the direction of the U.S. China policy of which he was largely the originator. Prior to his passing in 1994, Nixon commented about China to William Safire, “We may have created a Frankenstein.” Well, now is the time to discard that old strategy as the wily practitioner of realpolitik, Nixon, probably would have. Given the increasing competition with China across the board, the U.S. needs to acquire all the diplomatic leverage it can rather than push two great challengers together.

President Trump, to his credit, has vocally spoken against both the economic and military threat posed by China in ways none of the other post-Cold War residents of the White House ever did. While some of the tactics being employed may be blunter than needed and, in some cases like pulling out of the Trans-Pacific Partnership, counter-productive, Trump has seemingly, and correctly, closed the door on the era of American policy towards China marked by a desire to make them a “responsible stakeholder,” in the world order created by America after World War II.

China does not want this. As the astute observer of Asian politics, Singapore Prime Minister Lee Kuan Yew observed when asked if China seeks to displace the U.S. in Asia, “Why not? How could they not aspire to be number one in Asia and in time the world?” Trump has begun dealing with the reality.

Yet, much of this can be undone if America and the West continues to push Russia into becoming a spoiler in the great 21st Century drama of China’s re-rise to global prominence.

There are inherent tensions in the Russian-China relationship that should not be papered over. Rather, these should be featured prominently in American diplomacy with Russia, making clear that Russia should not fall into the long-term trap of becoming a little brother, energy vassal of China.

Russia has long been torn between its desire enter a more Western orbit, something Russian modernizers since Peter the Great have desired, and its Byzantine based Orthodox Christian heritage, as well as a tendency toward “oriental despotism” as inherited from its time under the Mongol Yoke.

With its current demographic challenges and the return to great power status of multiple Asian states, Russia faces several choices: attempt to compete with China and maintain an independent pole of power based on Central Asia, embrace China and become a junior partner, or join the West. Each of those options appeals to one of Russia’s historical self-images while also raising fears in certain segments of Russian society.

Unfortunately, it is increasingly obvious that Russia is being compelled to join China as a budding Sino-Russian axis is forming in the Eurasia landmass. China’s ambitious geo-economic plan, the One Belt, One Road (OBOR) is proceeding and now coordinating with Russia’s own geo-economic construct, the Eurasian Economic Union. In and of itself this would not be the worst thing that could happen. In fact, it could even help to stabilize and develop the currently challenged nations within Central Asia.

However, that is not the full extent of the strategic alignment. Military to military ties between Russia and China are continuing to expand as are coordinated diplomatic efforts.

In the wake of the Russian seizure of Crimea, and now especially after the 2016 U.S. election, Russia has been increasingly frozen out of Western institutions and hammered by sanctions.

Further, distrust already pervaded Western and, particularly, NATO relations with Russia even before the Crimean crisis.

Moscow continues to believe that NATO expansion in Central and Eastern Europe violated promises made in the George H.W. Bush Administration and during the immediate aftermath of the Soviet implosion. Since Crimea, NATO has been slowly upping its presence in places like Poland. Even the Trump Administration, which has done more than other recent Administrations to seek better Russian relations, has begun to give lethal arms to Ukraine.

While it might be nice to be able to simultaneously confront both Russia and China, it is ultimately strategically unwise and only reinforces efforts by the two Eurasian giants to coordinate against America. As this author has relentlessly pointed out, this looming axis is America’s ultimate geopolitical nightmare. It threatens to fulfill the prophecies of Sir Halford Mackinder and his famed “Heartland Thesis.”

To reverse this trend will require the U.S. being willing to work and make agreements with Russia that it, and some of its allies, might find problematic.

Ironically, given that the Trump-Putin summit is in Finland, a deal to “Finlandize” Ukraine should be considered. No less a staunch Cold Warrior that Zbigniew Brzezinski once made an argument for this. The same, to a lesser degree applies to Georgia. Further, while the U.S. and NATO will have no choice but to draw hard red lines on Russian instigated intervention in any current member of NATO, a pullback of recent increases in troop levels should be considered. Further, agreements for U.S. investment in Russia, as a partial counter to China would make sense as well as an understanding that Russia will remain the predominant power to interlocute between various nations in Central Asia and that the U.S. will back Russian rather than Chinese claims.

With Trump coming off a somewhat successful summit with Kim Jong Un and pushing forward on domestic policy including reshaping the U.S. Supreme Court, now is an excellent time for Trump to continue his non-traditional diplomatic gambits.

While such efforts will make some observers scream that Trump is a modern day Neville Chamberlain to Putin’s Hitler, this notion is both facile and utterly ignorant of history as it actually has taken place. As opposed to capitulation, it is merely recognition that Russia has interests in its near abroad and a tactical maneuver to avoid creating an adverse balance of global power.

While we may not like everything Russia may do in their region, we have bigger fish to fry and limited resources with which to fry them. Further, if FDR could deal with Stalin and Nixon with Mao, two mass murdering leaders that make Putin look like a choir boy, certainly, Trump can deal with Putin in order to maintain American diplomatic dexterity in an era of resumed great power geopolitical competition.

*Greg R. Lawson is a Contributing Analyst with Wikistrat.