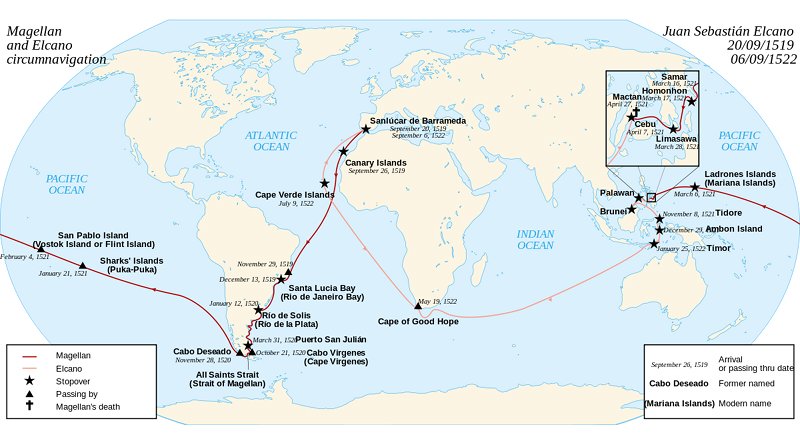 The exhibition, which is sponsored by the Unicaja Foundation, will remain open until February 23 at the General Archive of the Indies. Managed by the Spanish Ministry of Culture and Sport, the items kept by this institution include the largest collection of original documents relating to this achievement and can be found only a few metres away from the Guadalquivir moorings where this historic expedition was organised, set sail and returned.

The opening of this exhibition coincides with the plenary session of the 5th Magellan-Elcano Centenary National Commission in the regional capital of Andalusia, the honorary chair of which is held by King Felipe and Queen Letizia of Spain.

Besides telling the story of and commemorating the first circumnavigation as a key event in universal history, the exhibition commissioned by Antonio Fernández Torres and the lead archivists at the General Archive of the Indies, Guillermo Morán Dauchez and Braulio Vázquez Campos, also pays tribute to the explorational spirit of mankind and its approach to the unknown as the 50th anniversary of the first human moon landings is also being celebrated in 2019.

For the first time, this exhibition gathers into once place the most important documents and chronicles that have allowed the study and analysis of the first circumnavigation of our planet. It thus gives voice to and is narrated by the protagonists of that epic voyage begun by Ferdinand Magellan in 1519, which would go on to be the longest journey ever undertaken at the time – the first circumnavigation, and concluded by Juan Sebastián Elcano and his men of the Victoria in 1522.

A total of 106 original pieces and documents belonging to the General Archive of the Indies, various institutions in other European countries (such as the Torre de Tombo National Archive in Lisbon and the French National Library) and other Spanish institutions (such as the National Library of Spain, the Museum of the Americas, the Museum of Eastern Art in Valladolid and the Royal Academy of History), among many others, can be seen at the exhibition.

Of particular note are the Treaty of Tordesillas, the sculpture of a young King Carlos I of Spain borrowed from the National Museum of Sculpture in Valladolid, historic editions of the chronicles of Pigafetta, Albo, Mafra and Genovés, the original carving of the Virgin from the Victoria venerated by the sailors upon their departure and return, and the letter from Maximiliano Transilvano.

This impressive historical heritage will be surrounded by environmental and emotional context made up by audio-visual elements and an original display design aimed at ensuring visitors gain a sense of the challenges posed by this ocean voyage and bringing the public closer through different, more human, methods to the history contained in the original documents. These efforts are enhanced by some important ship models by the model maker, Antonio Hierro, the seven sculptures produced by Javier Romero Abrio and 25 items of gold work. These compositions were directed by Antonio Fernández Torres and the design team who worked on the exhibition.

After its time in Seville, the exhibition will travel to the San Telmo Museum in San Sebastian between June and September 2020.