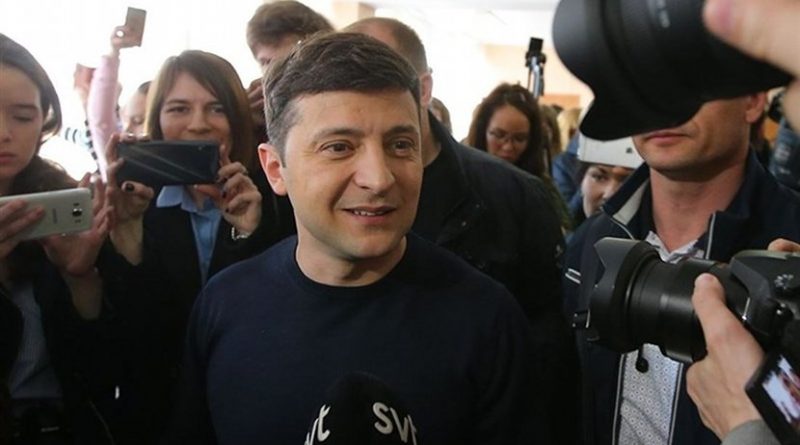 The military aid is largely meant to train and equip Ukrainian forces as they fight against Russia-backed separatists in a war that has lasted more than five years, killed more than 13,000 people, and torn apart a large swath of eastern Ukraine.

“I am thankful, I am grateful to him,” Zelenskiy said on September 13, a day after the White House dropped its resistance to the aid.

Speaking at the opening of the annual Yalta European Strategy (YES) meeting organized by Ukrainian tycoon Viktor Pinchuk in Kyiv, Zelenskiy said that he felt his relationship with the fellow former TV star-turned-President was “very good” and called the United States an “important strategic partner.”

Last week, the White House said it would review the military aid package, apparently over corruption concerns and to ensure that it would be used to further American foreign policy interests.

But the announcement came after efforts by Trump’s lawyer, Rudolph Giuliani, to get the new Ukrainian president and government to investigate alleged Ukrainian interference in the 2016 U.S. election and the work of former Vice President and Democratic candidate for president Joe Biden in Ukraine.

The aid review quickly sparked criticism from Republicans and Democrats in Congress, where there has been strong bipartisan support for Ukraine on the issue of fighting Russian aggression since the Kremlin annexed Crimea and fomented the war in eastern Ukraine in 2014.

Zelenskiy said he was careful not to comment publicly on the military aid issue while it was under review, suggesting that doing so could interfere with the White House’s decision.

“But now we can say we have very good relations with the U.S., because now we will get not only $250 million but [an additional] $140 million,” he said, referring to reports that the U.S. State Department would also be moving forward with a separate $140 million aid package for Ukraine apart from the Ukraine Security Assistance Initiative.

“When you are waiting for $250 million but then have the possibility to get $390 million, I like this sort of relationship,” Zelenskiy added.

“The Ukrainian president also warned the West against lifting sanctions on Russia saying they are a tax needed “to maintain world order.”

“A peace tax, if you will. And you know in the civilized world it’s normal to pay taxes,” he said.

Zelenskiy said he hoped to meet Trump at the White House soon.

“I’m sure we will have a meeting in the White House because I was invited,” he said.

Trump extended an invitation to Zelenskiy several weeks ago but a date has not yet been set for the meeting.

The Ukrainian president said the countries’ “diplomats are now agreeing on the final dates” and that it would happen before or after his visit to the United Nations General Assembly on September 23.