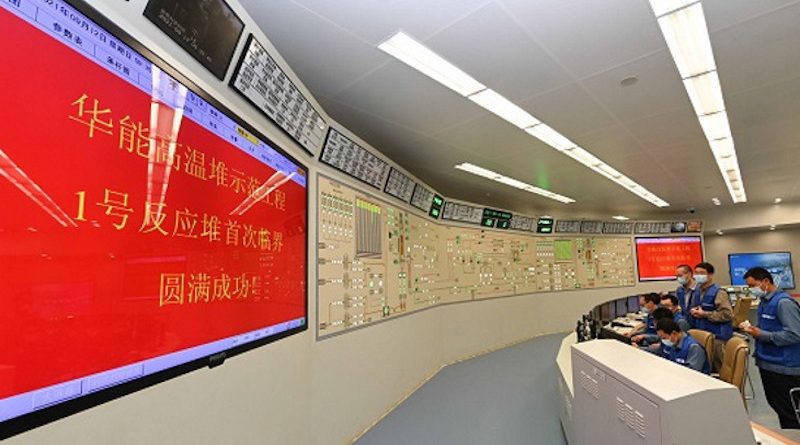 The first of the two high-temperature gas-cooled reactors of the demonstration HTR-PM plant at Shidaowan, in China’s Shandong province, attained a sustained chain reaction for the first time yesterday. The reactor is scheduled to be connected to the electricity grid before the end of this year.

The No.1 reactor achieved first criticality at 9.35am on 12 September, China Huaneng announced. It noted this milestone was reached 23 days after the start of fuel loading.

The company said the demonstration project will now conduct zero-power physical tests to verify the core and control rod performance and the availability of nuclear instrument monitoring system equipment. China Huaneng added it will “continue to standardise the follow-up commissioning and trial operation of the demonstration project to ensure the first grid-connected power generation in 2021.”

Construction of the demonstration HTR-PM plant – which features two small reactors that will drive a single 210 MWe turbine – began in December 2012. China Huaneng is the lead organisation in the consortium to build the demonstration units (with a 47.5% stake), together with China National Nuclear Corporation subsidiary China Nuclear Engineering Corporation (CNEC) (32.5%) and Tsinghua University’s Institute of Nuclear and New Energy Technology (20%), which is the research and development leader. Chinergy, a joint venture of Tsinghua and CNEC, is the main contractor for the nuclear island.

Cold functional tests – which aim to verify the reactor’s primary loop system and equipment as well as the strength and tightness of its auxiliary pipelines under pressure higher than the design pressure – were completed at the HTR-PM’s two reactors on 19 October and 3 November last year, respectively. Hot functional tests, which simulate the temperatures and pressures which the reactor systems will be subjected to during normal operation, started in January.

China’s nuclear regulator, the National Nuclear Safety Administration, issued an operating licence for the HTR-PM on 20 August. The loading of the first spherical fuel elements into the first reactor started the following day.

The HTR-PM has the advantages of inherent safety, a high equipment localisation rate, modular design and adaptation to small and medium-sized power grids. It also has broad range of potential commercial applications, including power generation, cogeneration of heat and power, and high-temperature process heat applications.

A further 18 such HTR-PM units are proposed for the Shidaowan site. Beyond HTR-PM, China proposes a scaled-up version called HTR-PM600, which sees one large turbine rated at 650 MWe driven by some six HTR-PM reactor units. Feasibility studies on HTR-PM600 deployment are under way for Sanmen, Zhejiang province; Ruijin, Jiangxi province; Xiapu and Wan’an, in Fujian province; and Bai’an, Guangdong province.