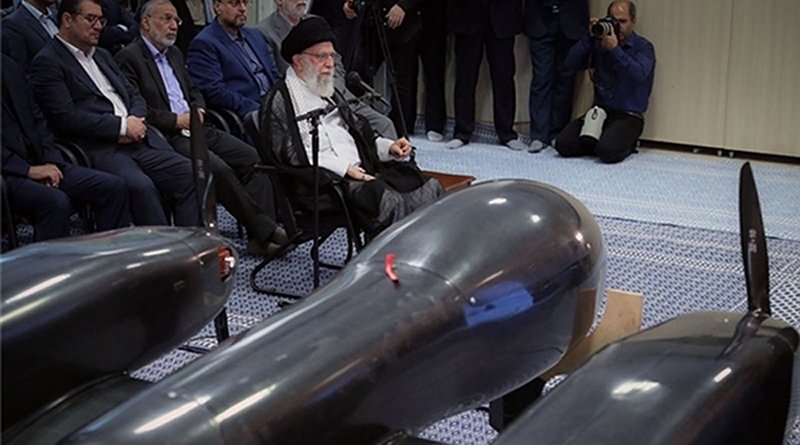 Iran displayed a new home-made double-engine drone during the recent visit by Supreme Leader of the Islamic Revolution Ayatollah Seyed Ali Khamenei to the Exhibition of Knowledge-based Enterprises and Advanced Technologies.

The exhibition dubbed ‘Made in Iran’ was held in the Hossainiyeh of Imam Khomeini in Tehran earlier this week.

The double-engine drone made of a composite structure has been manufactured by Iran’s private sector, Tasnim news agency said in a report on Sunday.

The aircraft had earlier displayed to Iranian President Hassan Rouhani and Parliament Speaker Ali Larijani late in winter and late in spring respectively.

The report did not reveal any further detail about the drone, but the aircraft is the second Iran-made double-engine unmanned plane after Sarir.

Ayatollah Khamenei paid a visit to the Exhibition of Knowledge-based Enterprises and Advanced Technologies, titled Made in Iran, in Tehran on Tuesday.

During this two-hour visit, while touring 30 different booths of knowledge-based companies and discussing different points with scholars and technology experts, Ayatollah Khamenei was informed of Iranian experts’ and youths’ scientific and technological achievements and patented projects.

During the visit, Iranian President’s Deputy for Science and Technology Sorena Sattari presented a report on the approaches and plans of his department for the transition from petro-economy to knowledge-based economy and said, “With the authorization of the Supreme Leader of the Islamic Revolution, the National Development Fund has provided excellent support to the country’s scientific sector, which increased the quality and speed of the scientific and knowledge-based projects to make the economy of the country resilient and to counter the sanctions.”