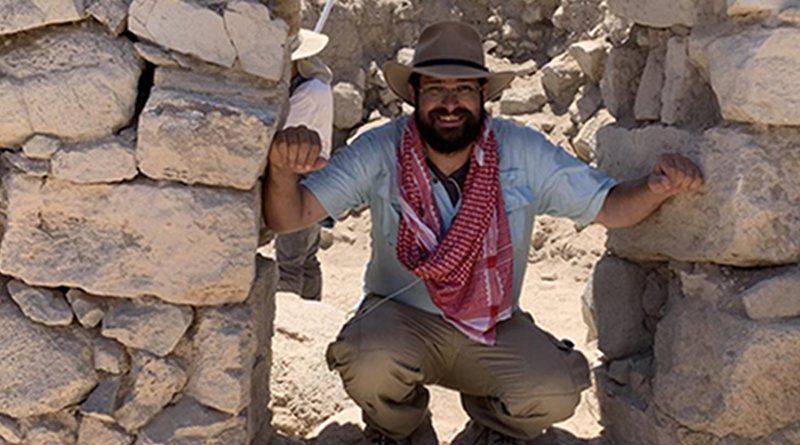 New research suggests it was climate-related drought that built the foundation for the collapse of the Assyrian Empire (whose heartland was based in today’s northern Iraq)–one of the most powerful civilizations in the ancient world. The Science Advances paper, led by Ashish Sinha at California State University, Dominguez Hills and coauthored by CIRES affiliate Adam Schneider, details how megadroughts in the 7th century BC triggered a decline in Assyria’s way of life that contributed to its ultimate collapse.

Q: What role did the Assyrian Empire play in global history?

A: There are people in the archaeological community who say Neo-Assyria was the first super power in the history of the world. The Neo-Assyrian empire (912-609 BC) was the third and final phase of Assyrian civilization. It was by far the largest empire in the region up to that time, controlling much of the territory from the Persian Gulf to Cyprus. The Assyrians were basically like the Empire in Star Wars, they are the all-devouring machine.

They also had incredible skill as hydro-engineers. The Assyrians were largely responsible for the way that the Tigris River Basin drainage now works, they completely remade the natural water flows of that landscape using aqueducts and other hydraulic infrastructure. Amazingly, some of these features are still functioning today.

Q: How did a culture this powerful collapse?

A: In the final decades of the Neo-Assyrian empire, the civilization was littered with political instability, civil wars, and invasion by outside armies. Our study shows that climate-related factors were underlying all of this.

The Assyrian empire was built during a time of heavy precipitation and successful harvests. But now we can tell, from climate records, that the civilization experienced a series of megadroughts that likely triggered the collapse of the empire–weakening agriculture and amplifying conflict. The impact of drought in this region was dependent on where the Assyrians were located in northern Iraq. The Tigris River is so deeply cut into the surrounding soil that you can’t do large scale-irrigation there. That’s why rainfall was so crucial to their lives. The Assyrians were much more vulnerable to the impacts of prolonged and severe drought than people downriver.

Q: How are these findings different than previous research?

A: Our team analyzed drip water that got fossilized in two stalagmites in Kuna Ba Cave in northern Iraq. Because the oxygen and carbon isotope composition in different layers of the cave formations can be used to infer changes in precipitation at a high temporal resolution, we get a much better proxy than anything else we had previously. And because the isotope record went all the way up to 2007 CE, we were able to correlate the stable carbon and oxygen isotope ratios with modern instrumental climate information from the region. This has enabled us to compare the modern isotope data with ancient layers. We now know that the Assyrian droughts started decades earlier than we had previously thought, and also that the period prior to the onset of drought was one of the wettest in the entire roughly 3800-year sequence. It changes some of the hypotheses we have made.

For example: King Sennacherib, who ruled from 705 to 681 BC, was well-known for building massive canals and other structures. In our earlier work on the question of drought in ancient Assyria, I and my colleague Dr. Selim Adal? had initially viewed him as a short-sighted ruler who had pursued short-term political goals at the expense of long-term drought resilience, and set in motion a catastrophic chain of events as a result. But with this new data, we now think thatSennacherib probably was already experiencing drought when he was king, and in fact he may well have been trying to do something about the environmental calamity during that time. So my colleagues and I have joked about issuing an apology letter to Sennacherib for the misunderstanding!

Q: How did you find yourself in this area of research: the crossroads between climate and history?

A: Archeology has been my passion since I was a small child. The climate angle I wanted no part of it, because that was the family business–my father was a climatologist, and I didn’t want to compete. But in the summer of 2010 he suddenly passed away. At that point I was without a clear dissertation project and started to rethink the idea of looking at climatic impacts on ancient people. So it started as a tribute to my father. I ended up going to a research center in Turkey and I got hooked. In fact, I very quickly earned the nickname “Climate Guy” as historians would come ask me if their research had any climatic basis.

Q: Have there been other times in history, in other places, where climate events impacted political structure like in Assyria?

A: The French Revolution is one example. In the two years prior to the French Revolution, poor weather led to a series of bad harvests, which alongside other factors helped to cause the price of bread to skyrocket, especially in Paris. Another example is the U.S. Dust Bowl in the 1930’s. We saw a mass migration resulting from both climatic and economic factors during the Great Depression, causing huge changes. It drove the development and agriculture in southern California. The question is not, “Did climate have an impact?”–it’s: “How, why, and how important was climate alongside the other factors?”

Q: What about modern day?

A: If you look at the record, the Assyrian Megadrought and what I have called the Late Assyrian Dry Phase is one of two of the most extreme periods of dry conditions in the entire 3800 year sequence for northern Iraq. The other one is the present day. Our working assumption here is that the latter is being driven at least in part by anthropogenic climate change.

Obviously, today Iraq is a very different place than it was in 700 B.C. But it’s not hard to look at that country’s problems with internal political stability and sectarian strife to think about the additional issue of drought leading to further trouble in that region.