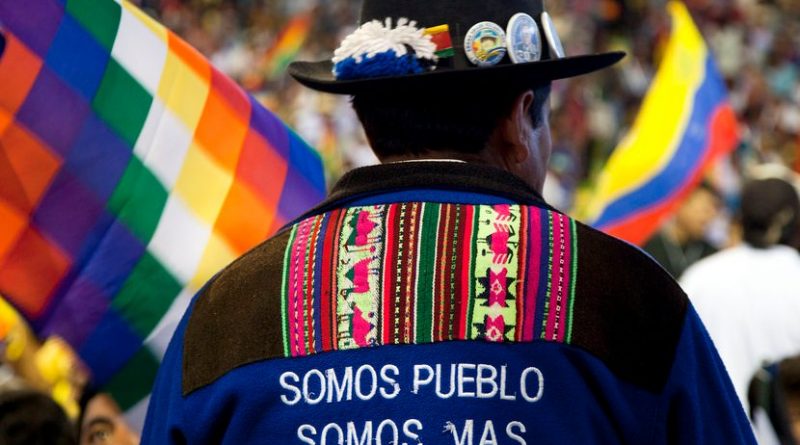 The violent coup in Bolivia, like all of Washington’s regime-change and dirty tricks operations, has been aided and abetted by corporate media’s masters of euphemism.

It was recently revealed that a Twitter executive  is also a British army reservist whose unit specializes in “information warfare” and “non-lethal” ways of conducting war. That is the very definition of hybrid war.

It is problematic to invade, occupy, overthrow and impose deadly sanctions on helpless civilians when average people can easily access information for themselves. Getting and keeping public support for evil doing is a risky proposition. That is why governments tell lies. They can’t assume a thumbs up from the public when they kill and destroy. They need propaganda and at this stage of history when the United States and its allies can’t expect to get what they want, the lies must be many and they must be promoted constantly.

We see this dynamic in action in Bolivia where a right wing coup aided and abetted by the United States forced president Evo Morales out of office and out of his country in fear for his life. The coup makers were stealthy, and used their scribes in corporate media and institutions like the Organization of American States (OAS) to vilify Morales and claim that his recent election was fraudulent.

They know what to do. Threaten and browbeat the members of puppet organizations like the OAS and force them to give legitimacy to their ill gotten ends. They use bots and an aggrieved exile community to tell lies on social media. After the elected president fled, the corporate media engaged in euphemisms such as “stepped down from office” instead of being truthful about military interference and attacks on his supporters. That is coup making 101.

But this phenomenon is not unique to American meddling against those nations deemed to be in its “back yard.” U.S. allies use the same methods to misdirect and to fool the gullible. The rulers in the United Kingdom have a serious problem. Millions of people there are angry about years of austerity that have impoverished them and ruined their lives. This anger was one of the reasons that they voted to leave the European Union. The turn of events was unexpected and the ruling elites are engaged in a constant effort to keep their shaky project together and prevent Labour party leader Jeremy Corbyn from becoming prime minister.

The need to cover up for one of their favorites recently took on a comical turn. When prime minister Boris Johnson ruined what should have been an easy photo opportunity the BBC sprang into action to protect him. Johnson arrived for a Remembrance Day  event looking disheveled, missed his cue and walked to the monument too soon, walked back in line and when he finally laid a wreath it was upside down.

The public observance of Remembrance Day is treated with the utmost seriousness. The British media will point out any trivial departure from accepted behavior. But when Johnson did everything except fall flat on his face, the BBC used footage from 2016 when Johnson was foreign minister. Of course viewers noticed and the official government network issued the unbelievable explanation that the use of three-year old footage was a mistake.

Britain is little more than a U.S. sock puppet and does everything that its masters in Washington demand. They are still in the business of engaging in spycraft at every opportunity. The day after the Bolivian coup a former MI6 operative named James Le Mesurier died from a fall while in Turkey. Le Mesurier was the founder of the White Helmets, the fake relief agency that operates in Syria with the blessings of the U.S./NATO axis and their jihadist friends.

Obviously no one at this early juncture knows if Le Mesurier suffered from an accident, foul play, or suicide but his role in Kosovo, Syria and Turkey is proof that the White Helmets were one of the biggest intelligence operations in the world. The now famous photos of babies covered in blood or dust are fake. Reports of chemical weapons use are fake too and Le Mesurier was the ring master of the fraud.

But the lies become harder and harder to maintain. Whistleblowers from the Organization for the Prohibition of Chemical Weapons (OPCW ) have confirmed what was long suspected. Reports of chemical weapons use by the Syrian government are highly suspect. Any debates over the findings of official reports were silenced and any evidence giving credence to unofficial narratives were covered up.

The empire finds itself in a difficult position. There is pushback from rivals who have the strength to counter the U.S. and its allies. The liars are like hamsters on a wheel, forced to keep running as they declare fake presidents in South America or broadcast sketchy footage on the BBC.

The attack is constant and everything from popular culture to the news media are used against us. Warfare is not just bombs and bullets. Twitter hires psy-op experts because they need them in order to keep the scam going. If not the people may wake up and ask inconvenient questions. They may even make demands. They just might rise up, and that is a risk that the war makers cannot abide.

Home » Hybrid Warfare In Bolivia And Beyond – OpEd