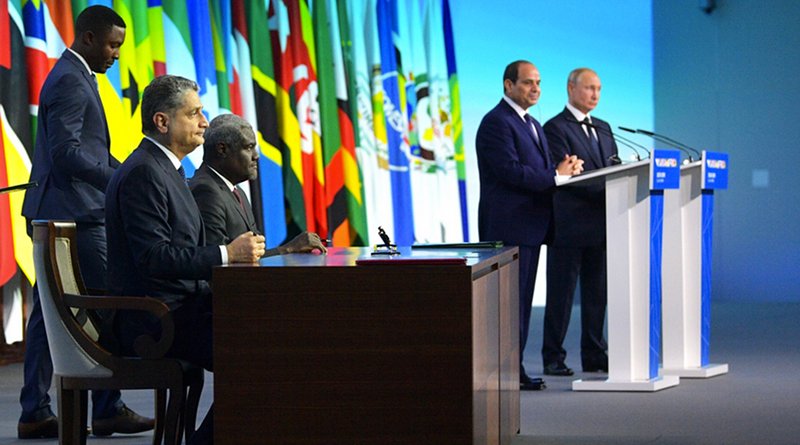 Eurasian Economic Commission Board Chairman Tigran Sargsyan and African Union Commission Chairman Moussa Faki Mahamat sign a Memorandum of Understanding between the Eurasian Economic Commission and the African Union on economic cooperation in Sochi, Russia. In the background is President of the Russian Federation Vladimir Putin and President of the Arab Republic of Egypt Abdelfattah Al-Sisi. Photo Credit: Kremlin.ru

More than 6 thousand participants and media representatives from Russia and 104 foreign countries and territories visited the first Russia–Africa Summit and Economic Forum held under the motto For Peace, Security and Development in Sochi on 23–24 October.

All 54 African states were officially represented at the events, 43 of the countries were represented by their leaders.

The Forum was attended by the heads of executive bodies of eight African regional organizations: the African Union Commission, the African Export–Import Bank, the East African Community, the G5 Sahel, the Arab Maghreb Union, the Southern African Development Community, the Economic Community of Central African States, the Economic Community of West African States. The Common Market for Eastern and Southern Africa, and the Intergovernmental Authority on Development representatives attended as well.

The discussions of the business program were devoted to the topic of deepening interaction between countries in various fields. The central event was the plenary session Russia and Africa: Uncovering the Potential for Cooperation.

Speaking at the plenary session, President of the Russian Federation Vladimir Putin stressed that the development of relations with African countries and regional organizations is among Russian foreign policy priorities.

“African states are confidently gaining political and economic weight, affirming themselves as one of the important pillars of the multipolar world order, and are taking an increasingly important part in working out international community’s decisions on key issues related to the regional and global agenda. Our positions are close or coincide on many of those matters, which creates favorable conditions for constructive interaction at the UN and other international platforms,” the Russian leader said.

“We will certainly continue the practice of regular consultations at the UN General Assembly, we will strengthen contacts between our countries’ representatives with this organization, and coordination with non-permanent members of the Security Council from among African countries. This will allow us to boost our efforts towards ensuring common and indivisible security, and the formation of a fairer model of the modern world,” Vladimir Putin said.

Summing up the events held in Sochi, Anton Kobyakov, Adviser to the President of the Russian Federation and Executive Secretary of the Organizing Committee, said that the total amount of contracts, agreements and memorandums exceeded 1 trillion rubles.

“Looking at the figures by sector, most of the documents signed were in export and foreign trade, international cooperation, high technologies, transport and logistics, extraction of mineral resources and oil and gas exploration, and investments and banking activities,” he said.

“Trade between Russia and Africa has doubled over the last five years, and all the prerequisites are in place for this figure to grow further. Six of the ten fastest-growing economies in the world today are in Africa. This is a continent that is home to the youngest and fastest-growing population on the planet. Mutually beneficial partnership, therefore, is crucial to the development of our countries’ economies, and the Russia–Africa Forum will play a leading role in this process. The next edition of the Forum will take place three years from now. It is important that we undertake to continue our intensive work during this time in order to strengthen dialogue through meetings of various kinds alongside our African colleagues, while working on the agenda for the business program at the next Forum,” Anton Kobyakov explained.

According to Amr Kamel, Executive Vice President for Business Development and Corporate Banking, African Export–Import Bank (Afreximbank), the event in Sochi was a roaring success in various areas.

“The areas identified include collaboration on infrastructure development with emphasis on rail and housing, driving export diversification through introducing modern extraction and processing of minerals, and agriculture […]. Africa’s future sustainability is pegged on affordable and dependable energy as a result diversifying its energy sources will be critical. The digital revolution presents countless opportunities for collaboration, this was also identified as a critical area of collaboration,” he told PenzaNews.

“The first significant outcome of this event is the statement that it will not be a once-off event; this is affirmed by the declaration that the next edition of the Forum will take place again in three years’ time. The next significant outcome is the depth and breadth of collaboration as witnessed through the number of B2B meetings, the signing of agreements, contracts and memoranda of understanding. […] Afreximbank is proud to have been a co-organizer in the Russia–Africa Summit and Economic Forum that saw a Memorandum of Understanding between the Government of the Russian Federation and the African Union as well as the Memorandum of Understanding between the Eurasian Economic Commission and the African Union on economic cooperation,” Amr Kamel added.

In his opinion, this positive outcome was made possible due to “the diligence and detailed preparatory work” carried out by the organizers.

“Afreximbank worked hand in hand with Roscongress Foundation and Russian Export Center to ensure success of this milestone event that is due to chart a new course for Africa’s partnership with Russia. As a co-organizer of this event we may say that the Summit met our expectations,” Amr Kamel stressed.

Meanwhile, Chrysanthos Vlamis, Political Science and International Relations Department, University of the Peloponnese, drew attention to the fact that the adequate participation from the African side at the Summit and the value of signed agreements indicate some positive prospects for Russian-African partnership development.

“While the US and China are busy negotiating bilateral tariffs, Russia-Africa cooperation can find potential space to grow. […] Given US tepid engagement in Africa – Donald Trump has not visited Africa yet, apart from his wife and daughter – The Russia-Africa partnership can gain grounds to develop further as a win-win situation in the future. Following the close Russia-Africa cooperation during the Cold War and its decline in the 90’s, the Sochi Summit appears hence as a promising opportunity for growth between Russia and Africa,” the expert said.

According to him, the parties entered into a number of extremely important treaties in the defense and energy sectors.

“Russia has already military deals with African countries worth about 14 billion dollars. […] Nigeria signed a deal with Moscow to supply 12 Mi-35 attack helicopters. With regards to the energy sector, Zambia, Rwanda, Ethiopia, Egypt and Nigeria are among the interested countries in developing nuclear power plants. Russian state development corporation VEB signed an investment cooperation agreement to finance a refinery in Morocco and oil productions pipelines in the Republic of Congo,” Chrysanthos Vlamis said.

“Moreover, Russian oil company Rosgeo signed a memorandum for drilling rights in Equatorial Guinea and Nigeria. Concerning the development of trade, Russia’s state-owned largest finance institution, Sberbank and VEB agreed with the London-based investment firm Gemcorp Capital to create a mechanism to support trade finance between Russia and African countries, specifically Angola, Ethiopia, Mozambique and Zimbabwe. The agreement was worth 5 billion dollars and its aim is to boost the Russian exports,” the analyst added and stressed that the countries should pay particular attention to improving the living standards and welfare of their citizens.

In turn, Neil MacKinnon, Global Macro Strategist at VTB Capital, shared the opinion about the unprecedented importance of the events in the southern capital of the Russian Federation.

“The Russia-Africa Summit is a key forum for establishing important trade and investment opportunities. Africa has tremendous economic growth opportunities and can make a major contribution to the global economy,” he commented briefly.

Martin Vaujour, Chief Executive Officer, TMH International, expressed confidence that the Summit and Forum laid the foundation for businesses to build upon.

“I participated in a vivid panel on Africa’s transport infrastructure development. I was glad to share TMH International strategy for Africa that business on the continent requires companies to build and invest locally with local partners in long-term projects, helping modernize existing systems and developing the local supply chain and skills,” Martin Vaujour said.

According to him, the event in Sochi was very effective.

“We had a very productive time at the Summit and Forum. We met with representatives from 10 countries, signed five MoUs with Nigeria and Angola to implement railway projects, as well as an addendum to the contract signed last year with ENR […] to precise the commercial terms of the contract,” CEO, TMH International, said.

“The most important result of Russia–Africa Summit and Forum is a clear message that Africa is a priority market and that we, as a company, are ready to support Africa’s growth,” Martin Vaujour stressed.

Nicolas Metaxides, Harokopeio University, School of Environnment, Geography and Applied Economics, expressed the idea that Vladimir Putin’s message to African leaders voiced during the summit, “is bringing Russia back to Africa.”

“This is a major attempt […] to revive Russian influence in an area in which Chinese and Westerners are more present. The Africans attending the Russia-Africa Summit in Sochi prove that they expected Russia’s move and wanted it,” the analyst said.

In his opinion, Russia’s move in Africa is vital right now in today’s economic and geopolitical context.

“Today, more than ever before, Russia has an interest in opening itself up to Africa by helping to develop it. Africa is a continent of great promise, with enormous potential, both human and material, in many areas,” Nicolas Metaxides noted.

At the same time, he expressed confidence that Moscow’s policy is not limited to the immediate expected benefits.

“It seeks much more than to benefit from direct investment policies, increased trade, including the sale of weapons, with the benefits associated with today’s geopolitical balance,” the expert said adding that Russia has an interest in approaching Africa with long-term aspirations.

“If Russia lays the groundwork for equitable co-operation with a mix of policies at all levels, such as economic, technological and cultural, the benefits for both sides will be enormous,” he concluded.