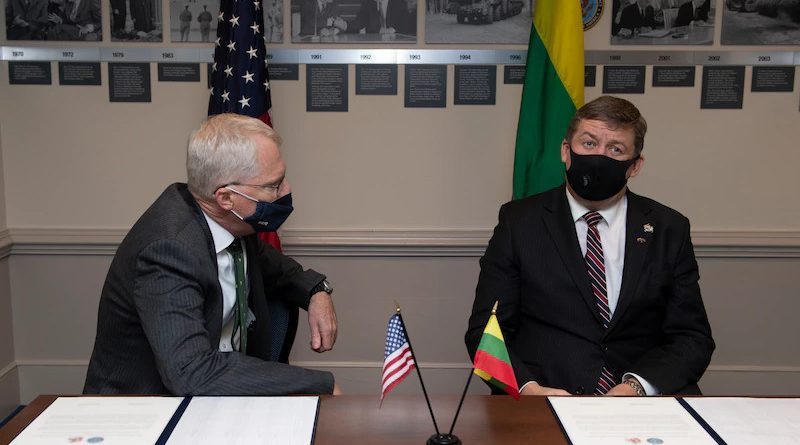 Acting Defense Secretary Christopher C. Miller used his meeting with Lithuanian Defense Minister Raimundas Karoblis to reassure leaders that although there has been a change at the top of the department, “the Department of Defense remains strong and continues its vital work of protecting our homeland, our people and our interests around the world.”

This was Miller’s first meeting with a foreign counterpart. He stressed the need for steadfast allies.

Miller, who replaced Dr. Mark T. Esper as secretary on Nov. 9, told Karoblis he has spoken with many allied counterparts, including those in France, Germany and the United Kingdom. After the Lithuania meeting, Miller will speak with NATO Secretary General Jens Stoltenberg. He has also spoken with leaders of both parties in Congress.

The acting secretary noted the history behind the U.S. relationship with Lithuania, saying that acting Secretary of State Sumner Welles refused to accept the annexation of Lithuania into the Soviet Union in 1940. He also quoted former U.S. President George W. Bush, who spoke when Lithuania was invited into NATO. “Anyone who would choose Lithuania as an enemy has also made an enemy of the United States of America,” Bush said.

Miller assured Karoblis that the United States shares Lithuania’s concern regarding Russia’s malign behavior. “In light of this and other challenges, we are working closely with Lithuania and other allies [to] strengthen our security cooperation, enhance deterrence of Russia and bolster Baltic defense,” he said. “Likewise, Lithuania continues to play an active and important role in NATO operations, while protecting the alliances’ eastern flank.”

Lithuania hosts U.S. troops — most recently soldiers of the 1st Battalion 9th Cavalry — who were part of Exercise Atlantic Resolve. Lithuanian service members have also fought alongside U.S. troops in Iraq and Afghanistan.

Lithuania spends more than 2 percent of gross domestic product on defense — a goal of all countries in the NATO alliance, Miller said.

Karoblis thanked the acting secretary for the warm welcome. He emphasized the cooperation between the two nations in the conventional domains, but said he looked forward to working with U.S. specialists in Lithuania’s new Regional Cyber Defense Center, which will open next year.

He said Lithuania has bought the U.S. joint tactical vehicle and will invest in Blackhawk helicopters, which will at last allow the nation to get rid of its legacy equipment from the Soviet Union and open a new degree of interoperability with its NATO allies.