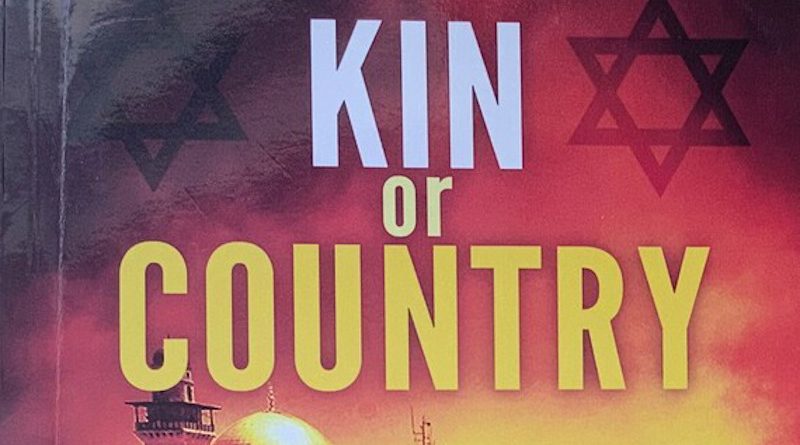 Detail of "Kin or Country" by Paul Alster.

Back in 2017 journalist Paul Alster, acting on behalf of an Israeli periodical, interviewed officials working in Israel’s Central Bureau of Statistics.  Located in Jerusalem, the CBS is the nerve center of a myriad of facts and figures relating to Israeli life. Sparked by what he learned on that visit, Alster found himself speculating about the possible future of the State of Israel.  Finally he decided to give his imagination free rein, and Kin or Country ‒ his first novel ‒ is the result.

The state of Israel came into existence in 1948, and the book is a flight of fancy into the year 2048, exactly a century later.  It is still a recognizable world, even if sophisticated smart speakers eager to obey every request are now commonplace, and vehicles drive themselves.  Back in the late-2030s, following a peace accord between Israel and the Palestinian leadership, part of the West Bank had been incorporated into a new state of Palestine, and East Jerusalem had become its capital.  Gaza had fallen under international supervision, and all over the Middle East those Arab states that had been harboring the descendants of refugee Palestinians had agreed to offer them citizenship.

With the Israel-Palestinian dispute no longer a factor, Alster’s starting point is the divergence, apparent in Israel from its very beginning, between the political aspirations and religious life-style of the ultra-orthodox ‒ the Haredi ‒ and those of the secular population.  In Alter’s vision of the future, that gap has widened to the point where the political and social influence exercised by each side has become intolerable to the other. Jerusalem, the remaining Jewish areas in the West Bank and a number of adjacent towns have become almost wholly haredi, while other parts of the country, with Tel Aviv as their hub, are heavily secular and resent having orthodox requirements imposed on them.  As a result, political movements have sprung up across the political spectrum, all asserting that the two ways of life are incompatible and demanding that they separate ‒ an issue, and the only one, uniting large sectors of both the haredi and the secular communities.

The demands became so insistent, and the political pressure so strong, that finally Israel’s parliament, the Knesset, agreed to vote on holding a national referendum.  The question  the Israeli population would be asked to vote on was whether the nation should be divided into two independent states, Israel and Judea, the former with its capital in Tel Aviv, the latter based in Jerusalem.  The Knesset vote passes, the nation prepares to hold the momentous referendum, and Kin or Country takes us through an imagined final eleven days in the countdown to the poll.

Those eleven days are filled with dramatic incident.  Not only political wheeling and dealing, but death stalks them, and the novel could be described as a political murder mystery.  Even though we are in no doubt about the culprit in one of the killings, the police investigation that slowly uncovers the truth creates a tension of its own, inextricably linked to the political maneuverings as the national vote draws closer by the day. The identity of a second guilty party we learn only at the end of the novel, and it is a revelation full of irony.  But the heart of the drama lies in the twists and turns on the political scene that leave the result of the national ballot ‒ and with it the future of the Jewish nation ‒ uncertain right up to the wire.

Applying his imagination to political and social factors already apparent within Israeli society, Alster ingeniously projects them a little way forward.  For example, he postulates a community of interest between the extreme right wing of the ultra-orthodox, Neturei Karta, notoriously anti-Zionist, and Iran’s Islamist regime.  A secret deal between Iran and the haredi “Yes” campaign forms a vital element in the overall political mix.  The US political situation, too, bears heavily on the relative fortunes of the two referendum campaigns. Into the narrative Alster adds the human and emotional stories of individuals caught up in the intense political issues being played out.

The question throughout the novel is whether Israel is to remain a united nation, the one and only Jewish state, or whether there are to be two Jewish states – Israel and Judea ‒ one a secular democracy, the other a theocracy.  We learn Paul Alster’s prediction only in the closing pages. The result is a truly gripping vision of the way Israel could travel in the next quarter of a century, an exciting and mind-stretching literary experience.

For some it might also serve as a dire warning about a possible dystopian future.  For, as Alster himself says about the novel: “It foresees a scenario that could easily become reality in the homeland of all the Jewish people, unless drastic societal changes come to pass in the next few years. Israel truly faces formidable and unique challenges. More than anything else though, this is a story about the dangers of religious coercion, about flawed morality across the political spectrum, but ultimately about human emotions and family relationships that apply equally to people of all faiths, creeds and colors”.

A gripping page-turner Kin or Country certainly is, but it is much more – an imaginative but convincing vision of a possible future for Israel, and thus a stark warning against the intolerance that could lead to it.

Home » Kin Or Country: Will This Be Israel’s Future? A Flight Of Fancy Into 2048 – Book Review