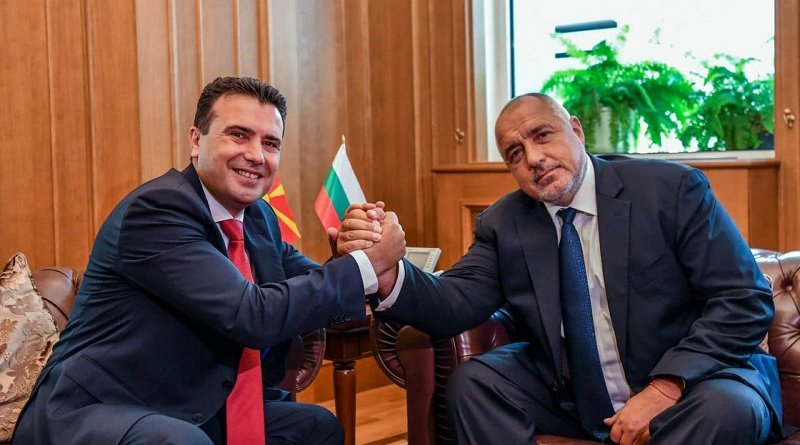 Bulgaria’s government is talking tough on North Macedonia’s EU ambitions, but analysts and ordinary Bulgarians see it as an electoral ploy and are forging their own connections.

Bulgaria’s government accuses North Macedonia of violating a 2017 agreement by failing to acknowledge their shared history and language similarities, a sensitive issue for many Macedonians. The two have clashed too over their rival claims to Ottoman-era hero Gotse Delchev. Analysts, however, question the importance of the issue to ordinary Bulgarians and see in the heightened rhetoric a thinly-disguised effort to win a few more votes in an election due in March next year.

A new war of words between Balkan neighbours Bulgaria and North Macedonia may be rooted in history but is fuelled by more immediate concerns – the re-election prospects of Bulgaria’s ruling coalition.

Long at odds over history, language and identity, tensions between Skopje and Sofia ticked up a notch on October 31 when Bulgarian Foreign Minister Ekaterina Zakharieva told Reuters news agency: “Skopje must acknowledge historical truth: If the Republic of North Macedonia acknowledges the Bulgarian roots of its nation and language, this would put an end to the tension in our relationship.”

At stake is North Macedonia’s bid to join the European Union, unlocked in mid-2018 by a deal with Greece over the use of the name ‘Macedonia’ but still hamstrung by historical disagreements with Bulgaria.

Weighing in over the past few days, Bulgaria’s nationalist defence minister, Krassimir Karachanov, has threatened to block North Macedonia’s progress in accession negotiations with the EU.

Bulgaria’s government accuses North Macedonia of violating a 2017 agreement by failing to acknowledge their shared history and language similarities, a sensitive issue for many Macedonians who insist they speak a distinct language and bristle at their characterisation as ‘Slavs’. The two have clashed too over their rival claims to Ottoman-era hero Gotse Delchev.

Analysts, however, question the importance of the issue to ordinary Bulgarians and see in the heightened rhetoric a thinly-disguised effort to win a few more votes in an election due in March next year. The government, led by the GERB party of Prime Minister Boyko Borissov but including Karachanov’s nationalist VMRO, has been buffeted for months by protests over corruption.

Some Bulgarians have taken to social media to ridicule the policy, imagining a world in which Germany would stand in the way of neighbouring Austria or the Czech Republic would meddle in Slovakia over issues of history and identity.

“On one hand, it’s indeed a pre-election move. The topic is not central to Bulgarian voters, but every percentage matters,” said political scientist Dimitar Bechev, a non-resident senior fellow at the Atlantic Council, citing how GERB “hardened the tone” before elections in 2013.

But Bechev pointed a “second layer” in the nature of the accession negotiations. “In these early stages,” he said, the candidate country is usually the one inclined to make compromises.”

Interestingly, both Borissov and his North Macedonia counterpart, Zoran Zaev, have sought to cool tempers, agreeing on November to continue “searching for solutions”.

Borissov’s government, however, depends heavily on the support of the nationalist United Patriots bloc, which includes VMRO and is known for its bellicose rhetoric.

The opposition in Bulgaria has criticised the row.

“To the failures in healthcare and economic policy, now our government is about to add another one – our relations with the Republic of North Macedonia,” Radan Kanev, a member of the European Parliament, wrote on social media on November 5.

“This failure lacks the topical and dramatic dimensions of the health and economic crisis. But it has lasting strategic and largely irreversible consequences.”

Kanev too saw it as an electoral ploy.

“This form of the policy cannot and should not be allowed to be a pre-election move. To be solved, it requires persistent, long-term and very careful diplomatic effort.”

In an interview with Bulgarian National Radio on November 9, Lyubomir Kyuchukov, director of the Institute of Economics and International Relations in Sofia, warned of the risk of fuelling “anti-Bulgarian” sentiment in North Macedonia. The policy could backfire, he said.

Some say that, outside of politics, relations between Bulgarians and Macedonians are in a far better state, notably in terms of cultural cooperation.

“I think that currently Bulgaria is facing its own historical mythologies and should solve them,” said Peter Dentchev, a Bulgarian theatre director and writer whose work has been shown across the former Yugoslavia, including in Skopje.

“The argument that history can be seen as something perfectly constructed is completely invalid because every historical narrative is a construct,” he told BIRN. “In these processes, there’s no authentic truth. So I see this current debate as a political madness and a return to darker times.”

Tsvetan Tsvetanov, a Bulgarian journalist and music promoter, said Bulgaria’s threat to block North Macedonia’s EU accession reminded him of the 1997 American political satire Wag the Dog, directed by Barry Levinson, in which a war in Albania is fabricated to distract voter attention from a presidential sex scandal.

“The whole thing is created just to divert society’s attention while the country is stuck in various troubles,” said Tsvetanov, who has brought various acts from North Macedonia to Sofia over the last decade.

“The voice of reason, or at least the voice of the open-minded and educated, is rarely heard: all we witness and base our opinions on are the official political statements,” he told BIRN.

“For 17 years I’ve been in North Macedonia almost every month: I’ve never been subjected to a bad attitude. Maybe political history is important but I think that personal history is even more important.”

In the last few years, Bulgarian writers like Georgi Gospodinov and Zachary Karabashliev have enjoyed success in North Macedonia, while UK-based Bulgarian writer Kapka Kassabova made her mixed Bulgarian-Macedonian family history a central point in her latest book To The Lake.

“The diplomatic dialogue should be conducted by real diplomats, not by compromised politicians on either side,” Karabashliev told BIRN. He said his book “18% Grey” had been “embraced” by the Macedonian readers “in the same way as Bulgarians – with open hearts.”

“I think literature is actually building the strongest bridges between us. In fact, culture in general.”

According to research published on November 12 and conducted by “Barometer Bulgaria”, 81.1 per cent of Bulgarians support Northern Macedonia joining the EU, but agree that the country should recognise the shared history.

A step toward compromise between Bulgaria and North Macedonia was made on November 10 when Boyko Borissov and Zoran Zaev met in Sofia during an EU-backed summit.