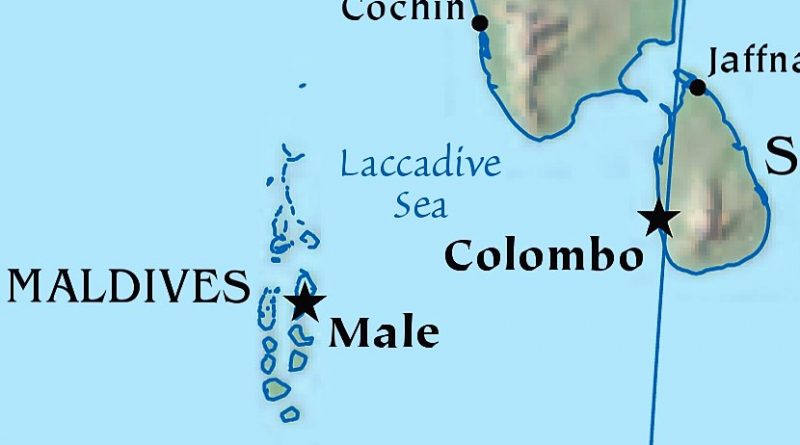 The decision of the Government of President Mohammad Waheed of the Maldives to terminate the contract given to a consortium headed by an Indian company to run the Ibrahim Nasser International Airport of Male has given rise to speculation that China might have nudged the Maldivian Government to terminate the contract and that Beijing might ultimately emerge as the beneficiary of the termination with a Chinese company being made responsible for the running of the airport.

Apart from the fact that the termination of the contract was preceded by a visit to Male by the Chinese Defence Minister Gen. Liang Guanglie during the course of visits to Sri Lanka, the Maldives and India and was followed by a visit to Beijing by Mr. Mohammed Nazim, the Maldivian Minister for Defence, National Security and Transport, earlier this week, no other evidence has been forthcoming in corroboration of this speculation.

The fact that Mr. Nazim handled the entire affair relating to the contract has added to suspicions that his visit to Beijing might have been utilized by him to brief his Chinese counterpart on the reasons and implications of the termination and to seek Chinese co-operation in running the airport.

During his stay in Bejing, Mr. Nazim met on December 11, 2012, Gen. Xu Qiliang, Vice-Chairman of the Central Military Commission of Communist Party of China (CPC), followed by a metting with Gen. Liang. There are so far no reports of his having met Prime Minister Wen Jiabao or Mr. Xi Jinping, the General Secretary of the Communist Party of China (CPC), who is also the new Chairman of the CMC.

According to the Xinhua news agency, Gen.Xu said during their meeting that the two countries have in recent years increased mutual political trust, expanded trade and economic cooperation, diversified cultural exchanges and set an example for countries to treat each other as equals and cooperate with sincerity.

He added: “The two militaries should continue to enhance high-level contact, strengthen pragmatic cooperation, expand the scope of cooperation and upgrade military relations.”

According to the Xinhua, Mr. Nazim said the Maldives hoped to strengthen communication and cooperation between the two countries as well as their militaries, jointly address common challenges and meet opportunities so as to promote the two countries’ relations to a higher level.

The Xinhua quoted Gen. Liang as telling Mr. Nazim: “China has always positively developed its military relations with the Maldives and hopes to enhance communication and cooperation, promote the construction of both militaries and safeguard regional peace and stability.”

After taking over as the President earlier this year, President Mohammad Waheed Hassan had visited Urumqi, the capital of the Xinjiang province of China, in the first week of September, 2012, to attend the second China-Eurasia Expo.

During his stay in Urumqi, he met Chinese Prime Minister Wen Jiabao, who reportedly assured him that China would provide assistance to the Maldives to counter climate change. Hailing the sound bilateral ties over the past four decades since the establishment of diplomatic relations, Mr. Wen said the two nations had set up a good example for countries of different sizes that treat each other equally and conduct cooperation in a friendly way, and that China would continue supporting the Maldives in economic and social development.

Mr. Waheed described China as a reliable friend and added that the Maldives was willing to increase communications with China in regional and international affairs, enhance their pragmatic cooperation and join hands with China to deal with global challenges including climate change, and advance the bilateral relationship into a new phase.

Three agreements were signed on September 2, 2012, between the two Governments in the presence of the Maldivian President and Prime Minister Wen, providing for Chinese assistance worth US $ 500 million.

These amounts included the grants under the annual economic and technical assistance program by the Chinese government, and a preferential loan of US $ 150 million from the EXIM Bank of China for the construction of 1500 houses in the Maldives.

A press note issued by the President’s office in Male highlighted the fact that this was the first time that agreements had been signed in the presence of the heads of governments of the two countries and that the agreements were signed in Urumqi, a Muslim area of China.

It is my assessment that China’s immediate and medium-term interest in the Maldives wll be in establishing a communications base similar to what it had in the Coco Islands of Myanmar to facilitate communications with the Chinese anti-piracy patrols in the Gulf and to snoop on Indian naval communications and monitor Indian satellite and missile launches.

Whether the new Government of the Maldives in its petulance towards India will oblige Beijing remains to be seen. The Maldives has considerable dependence on India in national security matters. Whenever Maldivian Governments have faced threats to their internal security and natural disasters, they had generally sought Indian assistance. The rapidity with which India can rush to the assistance of the Maldives, China cannot. It will be unwise and suicidal for any Government in Male to reduce the dependence on India in national security matters and turn to the Chinese, but one never knows.

India needs to closely monitor the developments without jeopardizing the mutual security assistance programs that have been built up with the Maldives since 1979.