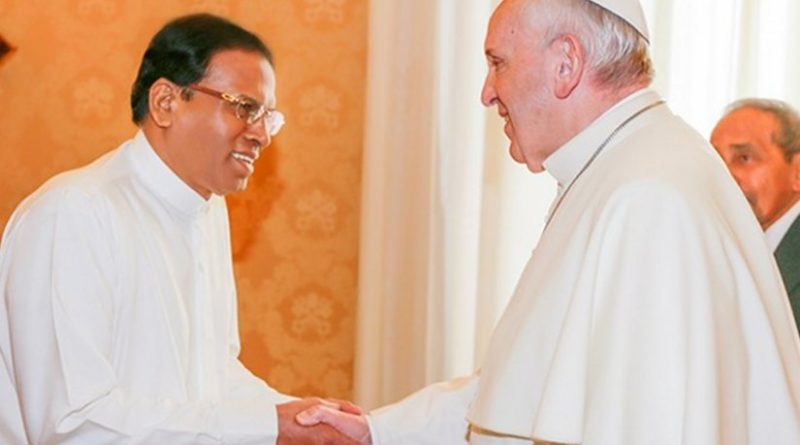 According to the Sri Lanka government, Pope Francis expressed his happiness over the warm welcome and hospitality extended to him when he visited Sri Lanka last January and said that Sri Lanka is a beautiful island nation with friendly people.

His Holiness commended the initiatives taken by the President towards peace building and reconciliation in the country.

The importance of protection of the environment to prevent climate change of today’s world was also discussed during this meeting.

Pope Francis further stated that the best way to combat terrorism activities and conflicts in the world is to halt the production of military equipment. His Holiness also praised the simple lifestyle of the President Sirisena, according to the Sri Lanka government.

President Maithripala Sirisena said that the blessing of the His Holiness Pope Francis is a great strength for the Sri Lanka’s path towards national reconciliation and peace and he emphasized that there is a great respect for Pope Francis not only in the hearts of the Sri Lankan Catholic community but also people of other religious communities in the country as well.

The Holy Father gave President Maithripala Sirisena a wooden depiction of the “Tree of Peace,” made with two intertwined olive branches and a book written by the Holy Father about the environmental protection and Social Justice was also presented to the President.

The Cardinal Secretary of State expressed his happiness over the Sri Lanka’s reconciliation process and assured his fullest support in this regard.

Sirisena said Sri Lanka is deeply committed to reconciliation and will continue to do so in the future too.

A detailed discussion was held regarding the development works of Sri Lanka between the President and the Cardinal Secretary of State, Parolin.