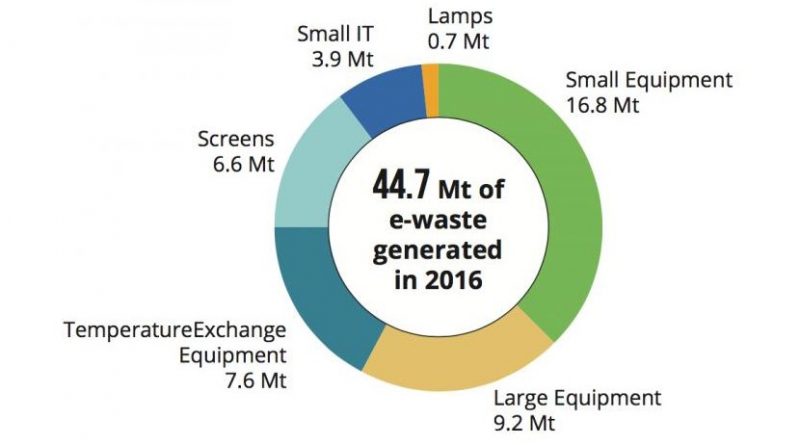 It is expected that the following three EEE categories, which already constitute 75 percent of global e-waste by weight (33.6 Mt of 44.7 Mt), will also see the fastest growth. Credit: Global E-waste Monitor 2017

In 2016 the world generated e-waste – everything from end-of-life refrigerators and television sets to solar panels, mobile phones and computers – equal in weight to almost nine Great Pyramids of Giza, 4,500 Eiffel Towers, or 1.23 million fully loaded 18-wheel 40-ton trucks, enough to form a line from New York to Bangkok and back.

Experts foresee a further 17% increase – to 52.2 million metric tonnes of e-waste by 2021, – the fastest growing part of the world’s domestic waste stream.

Only 20% of 2016’s e-waste is documented to have been collected and recycled despite rich deposits of gold, silver, copper, platinum, palladium and other high value recoverable materials. The conservatively estimated value of recoverable materials in last year’s e-waste was US $55 billion, which is more than the 2016 Gross Domestic Product of most countries in the world.

About 4% of 2016’s e-waste is known to have been thrown into landfills; 76% or 34.1 Mt likely ended up incinerated, in landfills, recycled in informal (backyard) operations or remain stored in our households.

On a per capita basis, the report shows a rising trend as well.

The highest per capita e-waste generators (at 17.3 kilograms per inhabitant) were Australia, New Zealand and the other the nations of Oceania, with only 6% formally collected and recycled.

Europe (including Russia) is the second largest generator of e-waste per inhabitant with an average of 16.6 kg per inhabitant. However, Europe has the highest collection rate (35%).

It is expected that the following three EEE categories, which already constitute 75% of global e-waste by weight (33.6 Mt of 44.7 Mt), will also see the fastest growth:

Expected to grow less quickly by weight due to miniaturization:

Expected to decline by weight in years to come:

Screens (ie. televisions, monitors, laptops, notebooks, tablets), with heavy CRT screens being replaced with flat panel displays. In 2016: 6.6 Mt generated, with an annual decline of 3 % per year to 2020

Each product within the six e-waste categories has a different lifetime profile, which means that each category has different waste quantities, economic values, and potential environmental and health impacts if recycled inappropriately. Consequently, the collection and logistical processes and recycling technology differ for each category. European studies show consumers’ attitudes when disposing of types of electrical and electronic equipment also vary.

Higher disposable incomes in many developing countries is evidenced in sales of electronic and electrical equipment. EEE sales in general showed rapid growth from 2000 to 2016, with the fastest growth recorded in emerging economies with low Purchasing Power Parity (PPP).

The report notes several trends and factors fuelling the global growth of information and communication-related electrical and electronic equipment, most notably the increasing number of applications and services in such areas as health, education, government, entertainment, and commerce, delivered at increasingly high speeds attracting more users to a growing number of networks.

The report notes that:

The report calls for stepped up global efforts to better design of components in electrical and electronic equipment to facilitate reuse and recycling (EEE), greater capture and recycling of old (EEE), and better tracking of e-waste and the resource recovery process.

Encouragingly, more countries are adopting e-waste legislation, the report says. Today 66% of the world’s people, living in 67 countries, are covered by national e-waste management laws (up from 44% in 61 countries in 2014), an increase caused mainly by India’s adoption of legislation last year.

Still, only 41 countries quantify their e-waste generation and recycling streams officially and “the fate of a large majority of e-waste (34.1 of 44.7 Mt) is simply unknown.”

Notes the report: “Having a national e-waste management regime in place does not always correspond to enforcement and setting the measurable collection and recycling targets essential for effective policies.”

In countries where there is no national e-waste legislation in place, e-waste is likely treated as any other waste, leading to a high risk that toxic elements in e-waste are improperly managed, sometimes scavenged for e.g. copper or gold by informal enterprises without proper worker protections.

Meanwhile, the type of e-waste covered by legislation differs considerably throughout the world, highlighting the need for harmonization.

“Without better statistics on e-waste, and closing the main data gaps of current e-waste statistics, it is impossible to measure the effectiveness of existing and new legislation to show any potential improvements in the future” the report says.

Such data is also needed to better track illegal international movements of e-waste from richer to poor regions in the world.