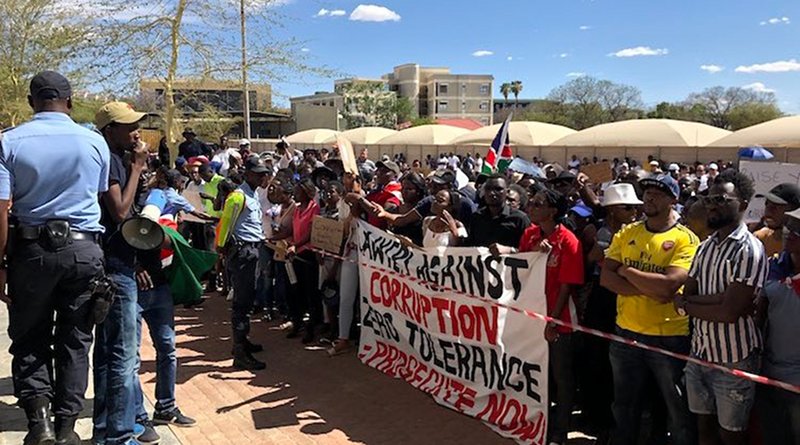 A scene from the citizen protest against corruption outside the Anti-Corruption Commission of (ACC) Namibia offices. Source: Twitter.

The stench of fish rot is wafting over Namibia. It’s taken down two Namibian ministers and leaves an Icelandic fisheries minister in the hot seat.

“A coterie of well-heeled vampires is sucking our fishing sector dry!” protested the local Namibian newspaper as news of the corrupt trading of valuable fishing quotas came to light.

Corruption in Namibia’s fishing industry has bled this income spinner nearly dry. Ever greater amounts of loot are being diverted into private hands and in the current case, as much as $500 million ($34 million U.S.) in kickbacks was described as the tip of an iceberg.

Filmed with hidden cameras, Esau can be seen accepting an iPhone from Al Jazeera’s reporters, posing as Chinese investors.

Under the instructions of Sacky Kadhila-Amoomo, managing director of Omualu, a Namibian fishing company, a donation was to be laundered to Namibia’s ruling South West Africa People’s Organization (SWAPO) party under the guise of a foreign investment in real estate.

The donation was to be channeled through the trust account of Sisa Namandje, the personal lawyer of all Namibian presidents since the country’s independence in 1990.

“You guys must be careful speaking to people about paying the minister,” Namandje is seen telling the undercover reporters when asked to confirm if he was happy with his trust account being used to launder funds to the SWAPO party’s election campaign.

“If you speak to a number of people about that, you will end up … [making handcuff gesture],” he continued.

The Al Jazeera Investigation began with documents leaked by Johannes Stefansson, a former employee of the Icelandic fishing conglomerate Samherji, to the whistle-blowing group WikiLeaks.

Since the report was released, investigations have been launched by two Icelandic banks and DNB ASA, Norway’s largest bank based in Oslo.

“We take this case seriously, and are focused on getting to the bottom of it for our own instruction as well,” DNB spokesman Even Westerveld said in response to a press inquiry. “We can’t exclude that our own inquiries will identify points for improvement in the bank’s work.”

Hundreds of protesters recently marched to the office of the Namibian Anti-Corruption Commission calling for the resignation of director Paulus Noa after he was accused of not taking sufficient action against known cases of corruption in the country.