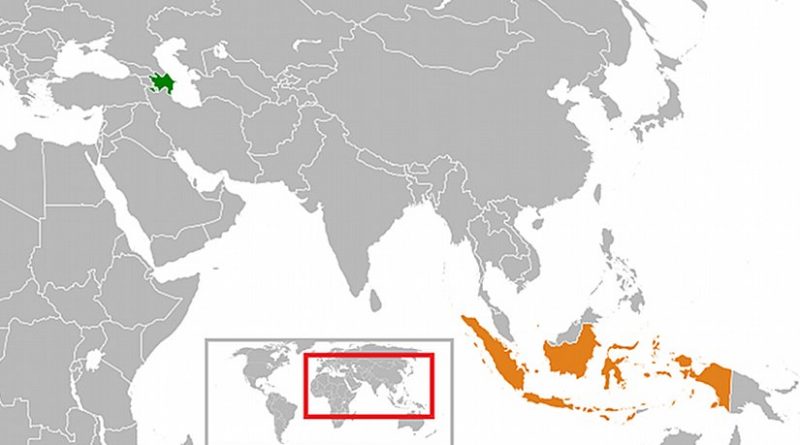 On December 28, 1991, the Republic of Indonesia recognized the independence and territorial sovereignty of the Republic of Azerbaijan. Less than a year later, on September 24, 1992, Baku and Jakarta established their diplomatic relations through an official statement that was signed in Moscow.

On December 2005, the Government of the Republic of Azerbaijan opened the doors of its embassy in Jakarta and on the other hand, Indonesian Government accredited its embassy in Iran to cover its bilateral relations with Azerbaijan.
On May 12, 2008, Jakarta and Baku signed a bilateral accord on the visa exemption for holders of diplomatic and service passports, such an agreement has built up momentum to further strengthen the bilateral cooperation between these two nations.

Additionally, Azerbaijan and Indonesia have signed the following cooperation agreements:

Over the past decade, Indonesia and Azerbaijan have maintained a constant proactive cooperation in international organizations and have intensified the bilateral political relations which have brought a number of positive outcomes over the years.

Since the beginning, Azerbaijan has fully supported the territorial integrity of Indonesia; in the same vein Jakarta is a strong advocate of Azerbaijan’s territorial integrity and supports the legitimate position of Baku regarding the protracted Armenian Aggression in Azerbaijan. Over the last years, a number of high level officials from both countries have engaged in bilateral meetings and reciprocal visits:

On October 21, 2015, the Human Rights Commissioner (ombudsman) of Azerbaijan Elmira Suleymanova hosted in Baku the head of Indonesian National Commission on Human Rights Nur Kholis. On this occasion, Mrs. Suleymanova highlighted the progress that Azerbaijan has accomplished in the area of ensuring full respect to human rights and highlighted the priority given to increase effectiveness towards the protection of human rights and basic freedoms in Azerbaijan.

In the course of their bilateral meeting, Commissioner Suleymanova provided to her Indonesian counterpart an overview of the history and consequences of the Nagorno-Karabakh armed conflict and the Armenian aggression in Azerbaijan: “this occupation [of Azerbaijani territory by Armenian Armed Forces] was condemned by several international organizations. There are relevant resolutions of the U.N. Security Council and documents of the Parliamentary Assembly of the Council of Europe [that condemn this occupation]. But Armenia refuses to honor these documents.”

In his statement Mr. Nur Kholis, highlighted the activity of Indonesian National Commission on Human Rights and applauded the progress being made in Azerbaijan in the field of human rights. Mr. Nur Kholis underlined the importance of solving the Armenian Aggression and Nagorno-Karabakh conflict by peaceful means, while the sovereignty and territorial integrity of Azerbaijan are fully respected.

The Indonesian Human Rights Commissioner may play a vital role to deliver and bring in the attention of the world the facts in support of human rights violations committed by Armenian Armed Forces in the territories of Azerbaijan. Mr. Nur Kholis could help emphasize again what is mentioned in the European Human Rights Court Statement which underlines the fact that “Nagorno-Karabakh issue is not a conflict, but an open and clear aggression of Armenia against Azerbaijan. As a result of this aggression and occupation more than 1 million Azerbaijani people are subjected to mass killings, genocidal acts and forced to flee from their homes. Their fundamental rights have been violated and are still being violated by Armenian Armed Forces.”

Indonesia must continue to express its support in favor of the territorial integrity of Azerbaijan and to denounce the Armenian aggression against Azerbaijan in front of every International Organization where Jakarta is an active player.
Indonesian Government would provide a tremendous support if it adopts, implements and supports the Resolutions issued by the Organization of Islamic Cooperation (OIC) namely 10\41-POL and 10\42-POL; both documents request all the OIC member countries to impose sanctions on Armenia and terminate diplomatic relations with Armenia until the latter withdraws its troops from the internationally recognized territories of Azerbaijan as demanded by the UN Security Council’s Resolutions 822,853,874 and 884. Until today, these two OIC Resolutions have been implemented by Turkey, Pakistan, Saudi Arabia and Afghanistan.

On November 13, 2015, the Embassy of Azerbaijan in Indonesia participated in the 48th Annual Charity Bazaar 2015 that was organized by the Women’s International Club in Jakarta. Almost sixty diplomatic representatives were gathered in this global event, including government officials, diplomats and many journalists.

The stands of Azerbaijan exhibited the country’s national culture, centuries old heritage, carpet weaving and art traditions; it also highlighted the 2015 first European Games in Baku. During the exhibition, the Embassy distributed to all participants a number of magazines and books that shed more light about Azerbaijan. On this occasion the Azerbaijani stand was visited by the wife of Indonesian Vice-President and the wife of the Deputy Foreign Minister.

The two distinguished dignitaries were informed about the country’s history and cultural heritage.

Meanwhile, trade deficit was persistent in January-September 2010, bilateral trade volume reached US$ 646,97 million with Indonesia’s export value of US$ 1.40 million and import value of US$ 645,56 million.
Azerbaijan is the second largest crude oil supplier of Indonesia and trade turnover between the two countries is growing every year. Wooden and machinery products are exported from Indonesia to Azerbaijan.

Both nations are in the process of establishing a Joint Commission on Economic Affairs; it is expected to strengthen the commercial ties between both countries. Baku and Jakarta, have a great potential to strengthen the economic, trade, commercial and bilateral business cooperation. The region of Nakhchivan in Azerbaijan has many attractive opportunities for Indonesian Businesses, especially in the food industry, automotive sector, carpet weaving industry and IT Technology.

During the 2005-2008, Nakhchivan Autonomous Republic has implemented important projects that have proved to be very successful and deserve a greater attention by Indonesian businesses and international community at large. Some of the sectors that have been improved are: renewed infrastructure, renewable energy projects, new industrial and logistical complexes, further development of agricultural and livestock sectors, among others. All these areas of Azerbaijani economy focused in the region of Nakhchivan are a great opportunity for partnerships between the business sectors of Indonesia and Nakhchivan (Azerbaijan).

Nakhchivan is an attractive tourist destination; there are many cultural places of interests such as “Ashabu Kahaf”, historic Islamic monuments, natural healing and treatment centers such as “Duzdag” which is a unique and a very influential treatment for bronchitis and other types of breathing and lung problems. Located in the border with Turkey and Iran, Nakhchivan can become a very attractive transit point for Indonesian tourists who want to travel to Umrah through Turkey.

One thought on “Azerbaijan And Indonesia: Dynamic Bilateral Relations – OpEd”