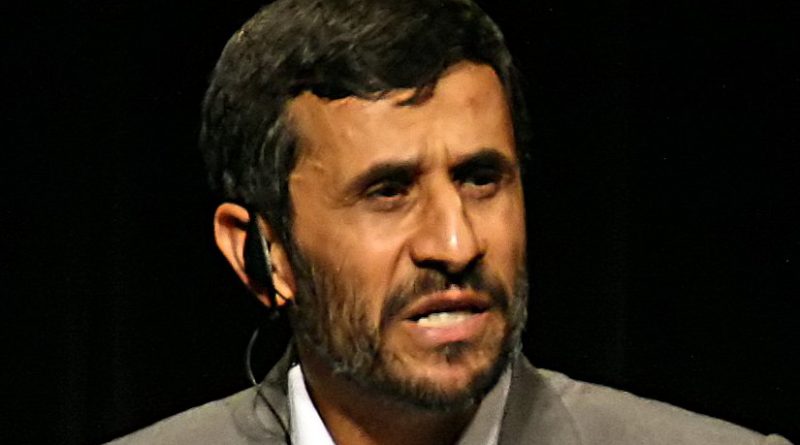 Iranian President Mahmoud Ahmadinejad trumpeted on Wednesday major advances in the Islamic Republic’s nuclear program, in a move likely to further raise the stakes in its tense stand-off with the West.

“I am grateful to the Almighty…for these great achievements we are offering to the people of Iran and all humanity,” he said at a research reactor in northwest Tehran.

In an event that was a startling mix of religious ceremony and scientific procedure, Ahmadinejad presided over the loading of Iran’s first domestically produced nuclear fuel rods into the research reactor, joining scientists as they intoned Islamic prayers after each stage of the process.

He then took to the stage at the reactor’s conference hall to announce that a “new generation of Iranian centrifuges” had been installed and put into operation at the country’s main uranium enrichment facility at Natanz in central Iran. He said this brought the number of Iran’s operating centrifuges for nuclear enrichment up to 9,000 from 6,000.

“I hope this new generation of centrifuges will bring joy to our people,” the Islamic Republic’s atomic energy chief, Fereydoun Abbasi, told officials, other dignitaries and the families of Iranian “martyr” scientists at the reactor.

Ahmadinejad also said that the developments meant Iran had now mastered the nuclear fuel cycle. “They tried to prevent us by issuing sanctions and resolutions but failed,” he said.

He reiterated, however, that Iran had no interest in building “un-Islamic” atomic weapons.

“The great powers associate nuclear science with atomic weapons, but nuclear science has many other useful functions,” he said. An English-language billboard on the territory of the reactor echoed his comments, proclaiming: “Nuclear power for everyone! Nuclear weapon for no one!”

The Tehran research reactor is designed for the production of medical isotopes used in the treatment of cancer patients. Fuel for the reactor is enriched to around 20 percent, whereas uranium for atomic weapons requires enrichment up to 90 percent. But analysts say the ability to enrich to 20 percent is an important step in any potential creation of nuclear weapons.

Western powers believe the eventual production of atomic bombs is the true purpose of Iran’s nuclear program and the United States and Israel have refused to rule out military force to counter what they view as a serious threat.

The United States and European countries have also tightened sanctions against Tehran in recent weeks, leading to spiraling inflation in Iran. A European Union ban on Iranian oil imports will come into force by July. Iran has threatened to close the Strait of Hormuz, a vital Gulf oil shipping route, in response. It has also vowed a “painful” reply to any attack.

But Ahmadinejad accused Western powers on Wednesday of using the issue of nuclear weapons to seek regime change in the Islamic Republic.

“Are you really so concerned about nuclear weapons?” he said. “Just look around the region. Is this really your true intention?”

His comments likely referred to U.S. ally Israel, which is widely believed to have possessed atomic weapons for over four decades.

Iran has also accused the West and Israel of being behind a spate of deadly attacks on Iranian nuclear scientists in recent years and on Wednesday portraits of the Islamic Republic’s “nuclear martyrs” lined the stage.

“They think that by assassinating our scientists they can stop us,” said Ahmadinejad, his eyes moist at times with tears. “But the Iranian people are not afraid of martyrdom!”

In an apparent sign of nervousness over the attacks, photographers and TV crews were warned on Wednesday that images containing the faces of reactor staff would be deleted by security.

Ahmadinejad also said that Iran was ready to return to talks with world powers on its nuclear program, but expressed doubts that the West was ready for genuine negotiations.

“You just want us to sign everything you say…this is not dialogue,” he said. He also accused world powers of “monopolizing science” and turning “scientific knowledge into tools of domination.”

Iran has refused to discuss its “unalienable” right to uranium enrichment and the West says there is no point to talks if the issue is not on the agenda.

However, Iran’s Arabic-language Al Alam television said on Wednesday that Tehran had sent a long-awaited letter to EU foreign policy chief Catherine Ashton expressing a readiness to “hold new talks over its nuclear program in a constructive way.”

Ali Bagheri, deputy chief of Iran’s national security council, told RIA Novosti in an interview in Tehran on Tuesday that the letter contained proposals for an agenda for new talks, as well as the date and venue for the negotiations.

He also said Iran had “no preconditions” for talks.

Russia helped build Iran’s first nuclear reactor at Bushehr. Like the West, Moscow has said it does not want to see Iran acquire a nuclear weapon, however, it has also stated that to date it has seen no evidence that Iran wants to build nuclear arms.

KwaZulu-Natal Police Commissioner, Lieutenant General Khombinkosi Jula, has vowed to root out criminal elements soiling the badge in the province.