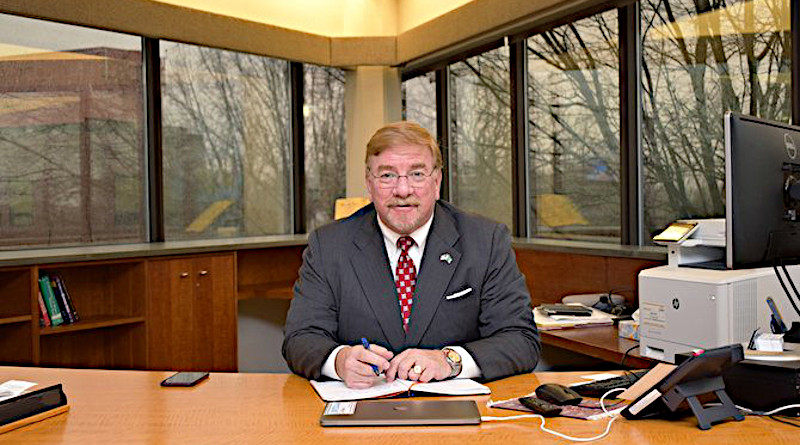 Policy experts have debated for 75 years about the underlying motive for the historic meeting in 1945 between US President Franklin Delano Roosevelt (FDR) and Saudi King Abdul Aziz on board the USS Quincy. Was it about oil? Was it about Palestine? Was it about sales of defense equipment?

But Hall Delano Roosevelt speaks with an ancestral authority on the subject, at least from the American side. “It was about creating a relationship and a friendship with this new King, who had just spent quite some time, and resources, and blood, and effort to unite the Arabian Peninsula for the purpose of being a productive part of the world,” he told Arab News.

As FDR’s grandson, he should know. “Del,” as he is called in Washington DC, has devoted a significant part of his career to promoting US-Saudi partnerships, in business, commerce and finance, and spent many years in the Kingdom and the Arabian Gulf with his wife Jan.

Since last year he has been chief executive of the US-Saudi Arabian Business Council, the not-for-profit organization which aims to promote commercial ties between the two countries.

Roosevelt family folklore has an interesting tale about how the Quincy meeting came about. “We were told that His Majesty had met several Americans, but was still curious about their leader. Does he want to colonize us? Does he believe in God? So he wanted to meet with my grandfather for himself, before he met with Winston Churchill, and FDR jumped at that opportunity,” Roosevelt said.

The rendezvous left an abiding impression. “In my humble opinion, what endures now between the US and Saudi Arabia was really just a natural growth from the conversation that took place that day. Sure they spoke about oil, but they also talked abut agriculture, and about industry and manufacturing,” he said.

Another tangible legacy of the meeting was the Saudi aviation industry, Roosevelt pointed out, after FDR gifted a DC-3 aircraft to the King — the first plane of the fleet that later became Saudia. “FDR was always trying to expedite processes and to keep government out of the way, so he had the aircraft boxed up in huge crates marked ‘agricultural machinery.’

“What endures today is the legacy of a bridge built between the two men, based on friendship, that resulted in business. FDR realized that here was a culture based on relationships, not strictly on numbers and commerce. If you build it on trust, commerce will follow,” he said.

The commercial imperative is still in place today, he believes, keeping things stable while governments try to deal with the political differences that may occasionally arise. “I’m a firm believer in peace through commerce. It’s the initial trust that allows for the friendship to grow. Even when one of them behaves poorly, the other one understands it and they work through it, just like you would in a marriage,” Roosevelt said.

Some analysts believe that the changing dynamics of the oil industry have fundamentally altered the US-Saudi relationship. In 1945, the US was the pre-eminent oil producer in the world, while the Kingdom had not yet fully tapped its vast reserves.

That situation reversed towards the end of the last century, when Riyadh became the leading exporter, only to flip back again in the past decade as the US shale revolution made America effectively self-sufficient in oil once more.

Roosevelt takes a long-term, market-oriented view. The new situation allows Saudi Arabia to sell its product to other markets, he said, and in any case it could all change again very quickly. “We’re feeling 10-feet tall now, but every four years we have a presidential election, and everything can change with a simple pen stroke. I just hope the people in the Beltway (Washington DC) get it right in 2020,” he said.

Roosevelt also hopes that another business proposition — the possible listing of shares in Saudi Aramco on a US stock exchange — does not fall prey to political chicanery. “This is an incredibly volatile year, tensions are running high, and things like this (a US listing for Aramco) can get caught up in the maelstrom of US politics,” he said.

But in any case, he insisted, the US-Saudi Business Council is not a political organization, and he has no idea how the presidential election will go. “For the first time in my life, and despite all the political DNA in my body, I have no clue,” he said.

The council exists to promote business ties, but surely there have been times when the complex geopolitics of the Middle East have deterred American businessmen from potential deals in the region?

“I’ve never had difficulty explaining to people here the case for expanding in the region. They all get the fact that there is a tremendous business opportunity.

“But in those conversations, usually after 10 or 15 minutes, they ask: ‘You’ve been there Del, you’ve lived there with Jan and your children have visited — is it safe?’ I know that question is coming,” he said.

“And I tell them truthfully that in all the years I’ve been in Saudi Arabia, Bahrain and other places, I have never experienced one moment of ‘attitude.’ I feel safer walking around there than in any major city in the West. There are no gangs, no drive-bys, no home invasions. You’re more likely to be assaulted by curiosity — are you from America or the UK? — and generosity,” he said.

He worked for years as the director of new business for the Alireza Group, one of the Kingdom’s oldest and biggest conglomerates, which taught him some big lessons in how to do business in the Kingdom and the region. “Work backwards. Don’t waste time bringing US companies to the Kingdom to see what gaps they might fill. First find the gaps, and then go to the US to fill that gap,” he said.