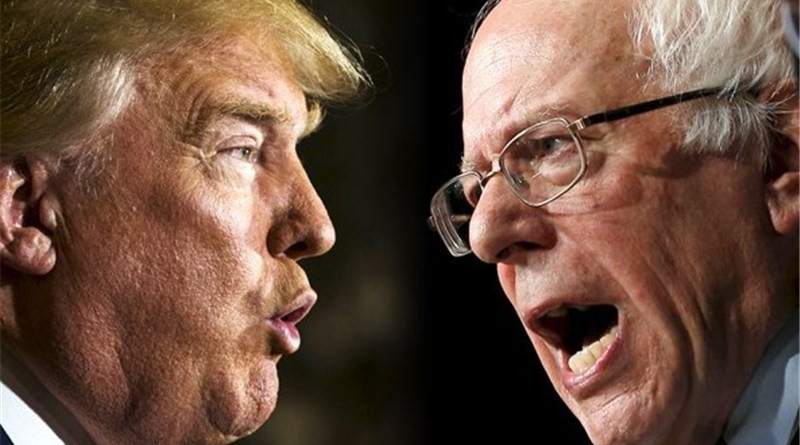 Is reelecting Donald Trump the only way to stem the tide of socialism in America? With self-described “democratic socialist” Bernie Sanders still a strong contender for the Democratic nomination, many on the right, including the president himself, argue that only by voting for Trump can socialism be abated. “America will never be a socialist country,” Trump confidently declared in his most recent State of the Union address.

The problem is that the United States is, in some respects, already a socialist country, at least if we define socialism broadly enough to encompass federal welfare programs. Though the president may lambast progressive policy proposals as intolerable socialist impositions, in reality these programs are mere expansions of policies that have existed for a long time.

Bernie Sanders’s assertion that public universities ought to be “tuition free,” for instance, is hardly a radical departure from traditional government education policy. Indeed, local and state governments already provide “free” education for students from kindergarten through high school and have done so for well over a century. For its part, the US Department of Education spends about $41 billion on elementary and secondary schooling. Almost $30 billion are awarded to college students in the form of Pell grants, while other students receive federally subsidized loans.

The most glaring example of an expansion of an already existent socialist policy is “Medicare for All.” The plan is clearly not novel; after all, the program it seeks to expand is right there in the name. President Trump may not want to extend Medicare coverage to every citizen, but he has shown no interest in rolling it back. In fact, the president’s 2021 budget proposes to increase Medicare spending every year for the next decade, nearly doubling its expenditures by 2030. So much for fighting against socialism.

To be fair, Trump’s budget proposal does contain certain reforms to Medicaid and other entitlement programs. These reforms would lower federal expenditures relative to current budget projections but would nonetheless increase spending on those programs overall. Despite a few small cuts, the federal government under Trump’s 2021 Budget would continue to run a deficit, albeit a shrinking one, through 2030.

Considering that the president has been incredibly harsh in his antisocialist rhetoric, his plans to downsize the federal government appear weak.

Indeed, aside from some modest deregulation, Trump has tended to increase the power and scope of government. While the president did implement somewhat substantial corporate tax cuts and personal income tax cuts, he then turned right around and raised taxes, imposing billions of dollars in tariffs on Chinese imports. The trade war, now in its third consecutive year, has cost individual American consumers thousands.

After the Chinese began imposing their own tariffs in retaliation, American farmers found it increasingly difficult to export their products. So, the president simply bailed them out. Without congressional authorization (and perhaps even without the legal authority to do so), the Trump administration doled out $28 billion of taxpayer money to farmers and is now promising to send more.

In classic socialist fashion, the bailouts appear to be going to a fairly small set of farmers. According to a recent NPR analysis, “100,000 individuals collected just over 70% of the money.” One giddy farmer interviewed by NPR referred to the bailouts as “Trump money,” a term reminiscent of the now infamous “​Obama money” woman. Unsurprisingly, many of these farmers were wildly overpaid compared to the actual harm they’ve suffered due to the president’s trade policies.

A Tale of Two Socialisms

For all of his antisocialist bluster, Trump has hardly been a friend to the free market. On the contrary, the president has pursued an agenda of economic nationalism, recycling old mercantilist policies intended to “protect” American industry from insidious foreign competition, even going so far as to explicitly order American companies not to do business with the Chinese.

But rather than fight back against Trump’s socialist tendencies, his administration has emboldened nascent nationalists within the conservative movement and has even encouraged former friends of the free market to embrace government interventions. Once a nominal defender of liberty, Senator Marco Rubio, for example, is now firmly in the economic nationalist camp, arguing that the government needs to subsidize special companies and engage in massive wealth transfers in order to further the “common good.” Other Republican legislators, such as freshman Senator Josh Hawley, have pushed for more government regulation of social media. And just recently the president’s attorney general, Bill Barr, suggested that the federal government purchase major American tech companies, essentially turning them into state-run enterprises.

In point of fact, Trump has succeeded in shifting the Overton window in Republican politics toward socialism, not away from it. The choice facing voters in 2020, therefore, is not between capitalism and socialism, but merely between two different kinds of socialism.

*About the author: Tyler Curtis is a lender at a community bank in Missouri, and earned an undergraduate degree in economics from the Missouri University of Science and Technology.