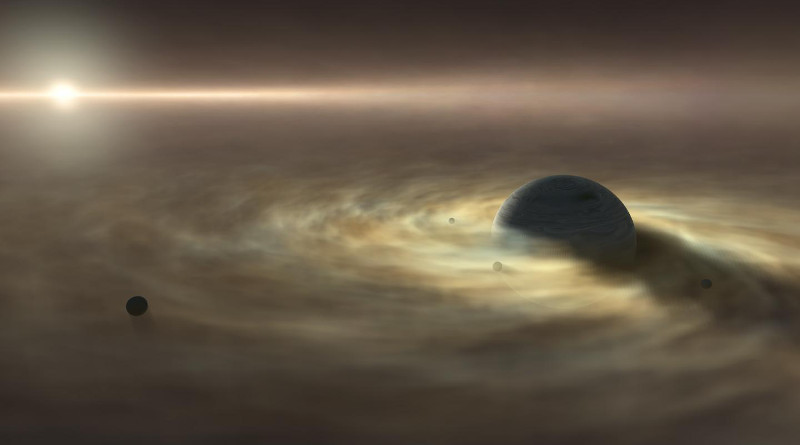 Numerical simulations showed that the temperature gradient in the disk of gas around a young gas giant planet could play a critical role in the development of a satellite system dominated by a single large moon, similar to Titan around Saturn. Researchers found that dust in the circumplanetary disk can create a “safety zone,” which keeps the moon from falling into the planet as the system evolves.

Astronomers believe that many of the moons we see in the Solar System, especially large moons, formed along with the parent planet. In this scenario, moons form from the gas and dust spinning around the still forming planet. But previous simulations have resulted in either all large moons falling into the planet and being swallowed-up or in multiple large moons remaining. The situation we observe around Saturn, with many small moons but only one large moon, does not fit in either of these models.

Yuri Fujii, a Designated Assistant Professor at Nagoya University, and Masahiro Ogihara, a Project Assistant Professor at the National Astronomical Observatory of Japan (NAOJ), created a new model of circumplanetary disks with a more realistic temperature distribution by considering multiple sources of opacities including dust and ice. Then, they simulated the orbital migration of moons considering pressure from disk gas and the gravity of other satellites.

Their simulations show that there is a “safety zone” where a moon is pushed away from the planet. In this area, warmer gas inside the orbit pushes the satellite outward and prevents it from falling into the planet.

“We demonstrated for the first time that a system with only one large moon around a giant planet can form,” says Fujii. “This is an important milestone to understand the origin of Titan.”

But Ogihara cautions, “It would be difficult to examine whether Titan actually experienced this process. Our scenario could be verified through research of satellites around extrasolar planets. If many single-exomoon systems are found, the formation mechanisms of such systems will become a red-hot issue.”

These results were published as Fujii and Ogihara “Formation of single-moon systems around gas giants” in Astronomy and Astrophysics Letters in March 2020. The simulations in this research used the PC Cluster operated by NAOJ.