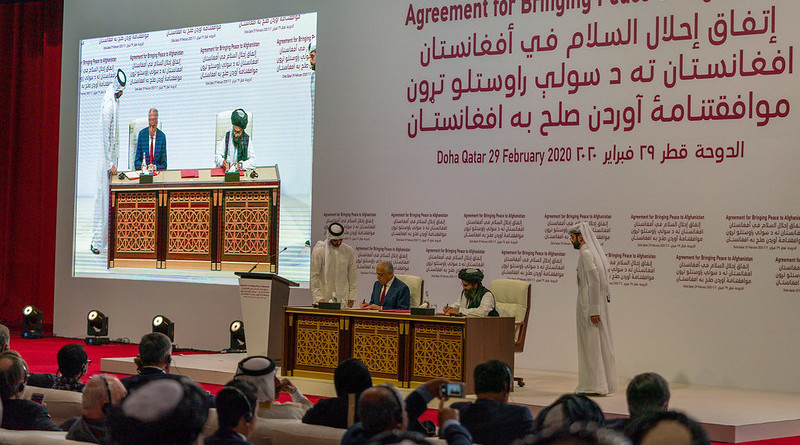 Most analysts declared the Doha Agreement dead on arrival, citing the resumption of Taliban attacks on Afghan government forces the day after the Agreement was signed. While the successful implementation of the Agreement is uncertain, reports about its demise are, to quote Mark Twain, grossly exaggerated. In fact, the Doha Agreement is not a Peace Agreement; it is an ‘Agreement to bring about Peace in Afghanistan.’ Which is why the agreement was not contingent on both sides agreeing to a ceasefire.

The US-Afghan government Joint Statement (JS) signed at Kabul makes clear that the Doha Agreement is supposed to lead ‘to intra-Afghan negotiations that would pave the way to a political settlement and a permanent and sustainable cease-fire.’ It must be recognised that for the Taliban, as with many armed insurgencies, an ability to inflict violence represents an important bargaining chip in the ultimate negotiations.

The US-Taliban Agreement is in many ways sui generis, and potentially creates a framework that future negotiators elsewhere may find useful, beyond dealing with the issue of cessation of violence. The creative way in which the legitimacy of the Taliban, or, actually, the lack of it, did not come in the way of a sovereign state (US) entering into an agreement with a non-State actor is amazing. The phrase, ‘the Islamic Emirate of Afghanistan which the United States does not recognise as a State and is also known as the Taliban’ occurs seventeen times in the Agreement.

This is an amazing acknowledgement by the US that it is the Taliban which is key to control over Afghanistan. It flies in the face of contemporary realities that the Taliban control only around 20% of the land area, with an equivalent area being disputed; the government of Afghanistan, now increasingly being reduced to being that of Ashraf Ghani, is in control of 60% of the country, having made gains in provinces like Nangarhar. In fact, a relevant question would be how does the Taliban expect to honour this commitment, especially in areas where it is absent or not in a dominant position? Going even further, the ‘Taliban will not provide visas, passports, travel permits, or other legal documents to those who pose a threat to the security of the United States and its allies to enter Afghanistan.’

The US, on its part, committed itself to total withdrawal of its, and that of its allies, troops in 14 months. As a confidence building measure, they agreed to draw down to 8,600 troops in 135 days and to completely withdrawal from 5 bases. The rest would be withdrawn over nine and a half months provided the Taliban lives up to its commitments. Withdrawal would cover troops and include ‘all non-diplomatic civilian personnel, private security contractors, trainers, advisors, and support services personnel.’ The initial withdrawal is hardly a concession; it would merely bring down US troops to the level existing when Trump took office.

The United States also committed that it ‘and its allies will refrain from the threat or use of force against the territorial integrity or political independence of Afghanistan or intervening in its domestic affairs.’ This again accords sovereign status to the Taliban.

There is no doubt that the government of Afghanistan has been given the short shrift, for which they themselves cannot escape blame. Ghani became President after the disputed 2014 elections, which forced the then US Secretary of State John Kerry to put his weight behind the formation of a National Unity Government.

Sadly, Ghani did not move to amend the Constitution or clean up the election laws, as required under the agreement that put him in office. The 2019 election has been farcical, with Ghani ‘winning’ the magical number (50.2%) in the first round itself, by polling just around 900,000 votes. The total number of resident Afghans is around 35 million. Significantly, the US has noted the results but not congratulated Ghani.

But Ashraf Ghani is not willing to yield that easily. According to the Agreement, 5,000 Taliban prisoners would be released by March 10, when the intra-Afghan dialogue is scheduled to begin. In turn, the Taliban would release 1,000 persons it holds. The JS says that feasibility about release of prisoners would be discussed when the intra-Afghan dialogue is on. After all, the Taliban prisoners are held by the government not by the US, so they have mounted a holding operation.

In a sign of the changing times, US President Donald Trump called Mullah Baradar, the Taliban leader who negotiated and signed the Agreement, to discuss the prisoners’ issue and affirm support for the rehabilitation of Afghanistan, and sent his envoy Zalmay Khalilzad to talk to the government in Kabul.

*About the author: The writer is Director, Atal Bihari Vajpayee Institute of Policy Research and International Studies, MS University, Vadodara