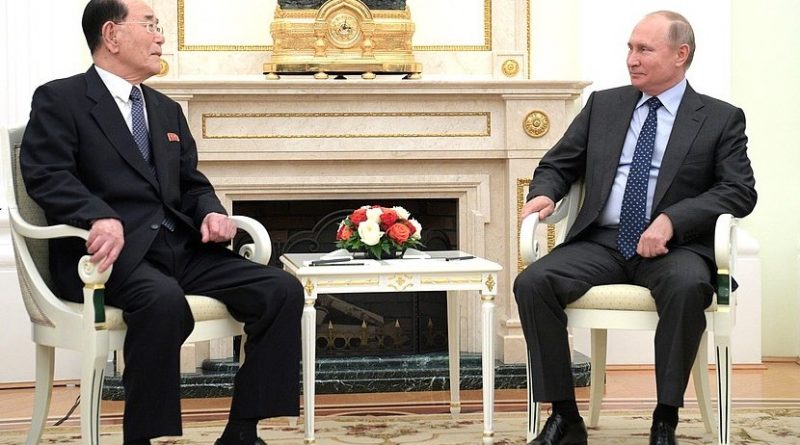 Putin said that Russia is prepared to increase economic cooperation with North Korea, and extended and invitation to Kim Jong-un to Russia; “for example, as part of the Eastern Economic Forum in Vladivostok this September. Or it can be done separately; we can schedule this meeting regardless of international events between our foreign ministries.”

In his meeting with Kim Yong-nam, Putin stressed the “old and very good relations,” of the two countries and noted that this year we mark the 70th anniversary of the establishment of diplomatic ties.

Putin also addressed the recent meeting between the leader of  Kim Jong-un and US President Donald Trump, saying that Russia welcomes and praises the outcome of that Summit that took place on June 12.

“We proceed from the premise that this is, of course, just the first step towards a full settlement, but the step was taken thanks to both leaders’ good will,” Putin said, adding that, “Of course, this creates conditions for further progress and reduces the overall level of tensions around the Korean Peninsula.”

Putin noted that, “the entire world was apprehensive, because this may have had a very dire outcome, even a large military conflict.”

Nevertheless, Putin said that thanks to this meeting, a possible negative scenario has been postponed.

“On the contrary, now there are prospects of resolving the problems by peaceful political and diplomatic means,” Putin said.