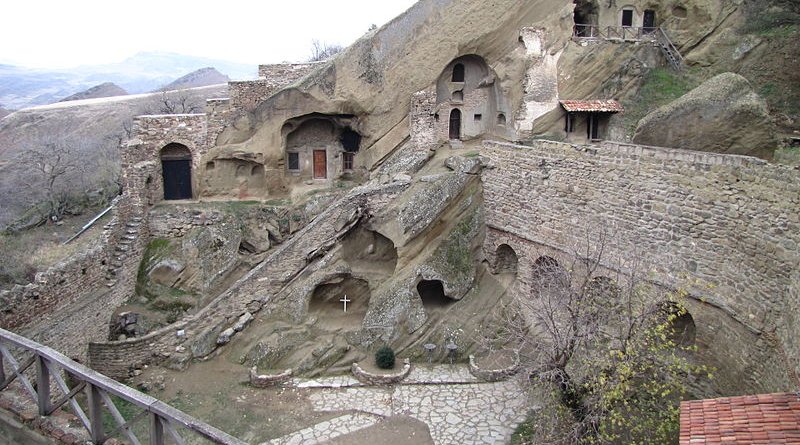 (FPRI) — The breakup of the Soviet Union brought freedom, independence, and sovereignty to its member republics without clearly demarcating their borders. The non-demarcated boundaries created numerous conflicts and points of contention in countries across the South Caucasus.

The origins of these border disputes trace back to Joseph Stalin’s nationalities policy of delimitation from the 1920s. The policy aimed partly to change the administrative division of the USSR and partly to adjust the boundaries of its territorial units while serving Stalin’s efforts to consolidate power. The still-frozen conflicts of Abkhazia, South Ossetia, and Nagorno-Karabakh are three examples of the legacy of Stalin’s policy.

But another, lesser-known border dispute over the David Gareja Monastery Complex, which resulted from these territorial adjustments, has locked Tbilisi and Baku in a standstill for almost a hundred years. The complex was founded by St. David Garejeli, one of the 13 Christian missionaries who arrived in Georgia from Mesopotamia in the 6th century. The complex is located in Eastern Georgia, 25km from Tbilisi and consists of 19 medieval monasteries with approximately 5,000 cells. Even though Georgia had been invaded and divided numerous times, David Gareja had always remained within its political boundaries until Stalin pushed for his policy of nationalities, which changed Georgia’s border with Azerbaijan leaving a part of the complex under the jurisdiction of Azerbaijan Soviet Republic.

Although smaller in scale, this particular dispute does escalate tensions from time to time, undermining the good neighborly relationship between Georgia and Azerbaijan and further threatening the fragile stability in the South Caucasus.

In March 2019, during her visit to Azerbaijan, Georgian President Salome Zurabishvili raised the issue of the border delimitation disagreement between the two countries. Then, on April 20, while visiting the David Gareja Monastery Complex, Zurabishvili raised the issue again. She called for progress in the border delimitation talks and pressed for swift demarcation of the site.

Zurabishvili’s statements ignited widespread discontent in Azerbaijan as Baku exerts full legal control over the area. In response to the Georgian President’s statements, right before the Orthodox Easter celebration, Baku closed access to the monastery for Georgian priests, monks, and other visitors. Baku reopened the border three days later. The two countries’ foreign ministers took steps to defuse the tension and avoid escalation. Georgian Foreign Minister David Zalkaliani said, “I have spoken with my Azerbaijani colleague and Georgian Interior Minister has contacted his colleague in the country. The problem has been settled for now.”

Although the border closure was brief and temporary, it still managed to inflame public emotions. Populist and nationalist leaders made provocative, xenophobic, and offensive statements. The statements also contributed to the growing anti-Turkish, anti-Azerbaijani, and anti-Georgian propaganda campaigns in both capitals; they also exacerbated religiously infused resentments. Troll and bot networks jumped into the public debate fomenting discord and dissension while promoting increasingly divisive narrativesbeneficial only to Moscow.

At the government level, both sides took reasonably moderate positions to reduce tension and avoid further escalation. Georgian Minister of the Interior Giorgi Gakharia called for restraint while urging both sides to treat the issue with more care and prudence. Baku also expressed its readiness to discuss the delimitation and demarcation process of the Azerbaijan-Georgia border. To get the ball rolling, both sides appointed deputy foreign ministers as heads of Border Delimitation Commissions to lead the talks.

The dissolution of the Soviet Union in the early 1990s, in a sense, provided an opening, a window of opportunity, for both sides to finally settle the issue of David Gareja after decades of complaints during Soviet times.

Successive Georgian governments proposed various options, offering land swaps to Baku, in order to bring the entire complex under Georgian jurisdiction. However, every such attempt from Tbilisi was met with Baku’s refusal, citing the monastery’s strategic and historical importance for Azerbaijan.

Until recently, this issue had been on the back-burner due to burgeoning relations between the two nations. Projects, such as the Baku-Tbilisi-Ceyhan (BTC) and Baku-Supsa Pipelines and the Baku-Tbilisi-Kars (BTK) Railway, and the accompanying benefits, have locked Baku and Tbilisi into a sustained, strategic partnership, which has made the border issue less important, but tensions occasionally have risen throughout the past two decades.

For instance, in April 2007, Azerbaijani Deputy Foreign Minister Khalaf Khalafov stated that David Gareja was not a Georgian monument, but “home to Caucasian Albanians who are believed to be the earliest inhabitants of Azerbaijan.” The statement was not well received in Tbilisi and sparked a diplomatic row between Georgia and Azerbaijan. Georgia’s then-Foreign Minister Gela Bezhoashvili responded by asserting that “Khalafov’s history lessons are absolutely incomprehensible” and that “he should read up on world history.” In May 2012, Azerbaijani border guards did not allow Georgian priests into the Udabno monastery claiming that the monument was Albanian and not Georgian. The protests, meetings, and public discontent caused by this incident did not die down in Tbilisi until President Mikheil Saakashvili and President Ilham Aliyev personally settled the issue during a NATO Summit in Chicago in 2012.

Georgia can’t afford to escalate tensions with Azerbaijan. Considering its weak standing with Russian-occupied frozen conflict zones in Abkhazia and South Ossetia, as well as its dangerously fragile domestic political climate, weakening democratic institutions, and growing internal polarization, any serious breakup with Azerbaijan could have devastating economic, political, and geopolitical consequences for Tbilisi. This is not to say that Baku has nothing to lose if this partnership erodes. Georgia is arguably Azerbaijan’s most important neighbor and strategic partner—its access route to Turkey, Russia, Black Sea, and Europe. Without Tbilisi’s goodwill and support, Baku’s mega-projects and strategic geopolitical stance would diminish significantly.

Evidently, Tbilisi is not in the best shape to negotiate a comprehensive border swap deal with Baku. Unlike previous times when relations between Tbilisi and Baku had been reinforced by close personal friendships at the highest level (Eduard Shevardnadze with Heydar Aliyev and Saakashvili with Ilham Aliyev), today, the friendship and personal bond that the previous leaders had enjoyed are absent. Consequently, the relationship between the two sides is far from the optimal, and it is often seen merely as a marriage of convenience. Moreover, unlike in Baku, where the president is fully in charge of the political processes, the Georgian side is internally off-balance, lacking a leader with the legitimacy and political capacity to successfully lead the negotiation process.

Nevertheless, sooner or later, Tbilisi will need to offer a reasonable solution to Baku. Unlike President Zurabishvili’s recent statement that lacked a strategic vision and political support in Tbilisi, the call for progress for a delimitation and demarcation process must be backed up with a comprehensive and well-thought-out strategy, acceptable to both parties. Baku also needs to keep in mind during the Delimitation Commission talks that its strategic partnership with Tbilisi is a two-way street that requires goodwill and compromise.

It remains to be seen if Tbilisi and Baku can reach a sufficient compromise—considering such a deal has vexed leaders for decades.

*About the author: Miro Popkhadze was Georgian Ministry of Defense Representative to the United Nations from 2015 to 2019. Prior to this assignment, he served as the Assistant Defense Attaché at the Embassy of Georgia to the United States in Washington, DC. Popkhadze was a non-resident Fellow at the Atlantic Council of Georgia from 2010-2012. His research areas include Russian foreign policy, Eurasia security issues, and geopolitics of the Black Sea/ Caucasus region. Mr. Popkhadze is the Elliott School’s Master of International Policy and Practice (MIPP) candidate at George Washington University. He holds an MSc in Political Science from Suffolk University and a BA in International Relations from Javakhishvili Tbilisi State University in Georgia.