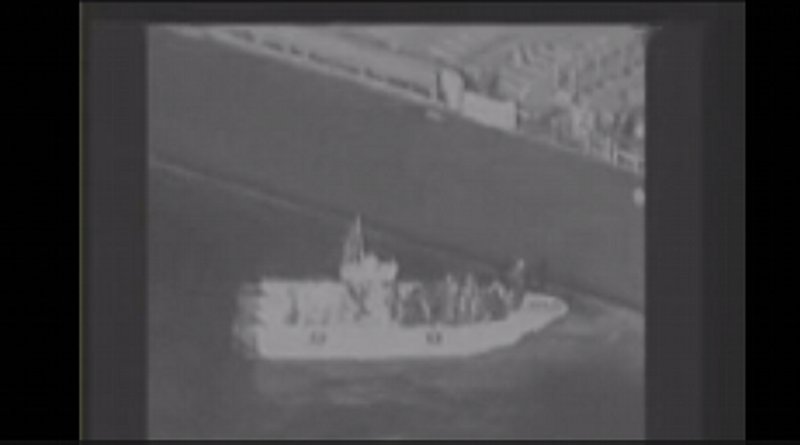 Unexploded Limpet Mine Removed from M/T Kokuka Courageous in the Gulf of Oman. Screenshot from USCENTCOM video

The US government has released a video purportedly showing an Iranian patrol boat removing an unexploded mine attached to the side of a Japanese oil tanker, Kokuka Courageous, paraded on US media as a ‘smoking gun’ proving Iran’s culpability in the June 13th attack on two tankers in Sea of Oman. Coinciding with Tehran peace trip of Japan’s Prime Minister, Shinzo Abe, these attacks have in essence torpedoed Abe’s mission thus “sabotaging diplomacy,” to paraphrase the tweet of Iran’s Foreign Minister Javad Zarif.

But, the video released by Pentagon in fact raises serious questions, suggesting that we maybe dealing with another ‘wag the dog’ scenario, recalling the 1997 Hollywood dark comedy dealing with the fabrication of war videos.

First, according to the Pentagon statement, the Iranian boat removing the mine approached the tanker at 4:10 PM, approximately nine hours after the tanker was hit. The video is said to come from the US destroyer Bainbridge, which was some 40 tactical miles from the tanker at the time of the incident.

We can safely assume that after receiving the distress call, Bainbridge sailed toward the tankers as it picked up the crew of one of the tankers from a tug boat. Yet, there is no photo of Bainbridge in vicinity of any of the two tankers throughout the day, despite having its drones filming the tankers.

This simply means that between 7 AM and 4 PM, the US military had plenty of time to observe and detect the “unexploded mine” on the side of Koku and make appropriate response. It did neither.

Second, the US’ claim about mines is contradicted by the crew of Kokuka, who observed “flying objects” that hit the ship. The crew’s witness account is a direct evidence that undermines the credibility of the official story put forth by US Central Command.

Third, the video is unusual in not showing any time and date, for a sophisticated US operation (!), nor does it show any fire at the ship, nor does it clearly show anyone from the (unmarked) boat removing anything from the ship’s hull.

Fourth, the principal reason to cast doubt on the video is that it is used to prove Iran’s role behind the attacks, which according to US Secretary of State Mike Pompeo, required a great deal of sophistication and expertise.

But, the problem with this narrative is that the same sophisticated Iranians, who are supposedly so brilliant in pulling off repeated such attacks unseen, are also portrayed as so clumsy as to not wait for sunset and or fail to remove the mine in early morning hour when they responded to the distress call, thus letting themselves be caught red handed in broad day light and when they knew the tanker would be under close scrutiny. In a word, it simply makes no sense, except from the prism of US seeking to incriminate Iran at any cost, as part of a step-by-step strategy of increasing escalations with Iran.

Clearly, US wants to have it both ways, portray the “rogue” Iranians as capable of considerable mischief with a high degree of professional sophistication and, simultaneously, as highly amateurish. This schizoid image of Iran serves US’ interest in smearing Iran and thus laying the ground work for another Iraq-like war scenario based on false pretexts.

As expected, the entire mainstream US media has been enlisted to sheepishly toe the line, parroting the US accusations through the endless parade of “experts” pinning the blame on Iran, when in fact there is plenty of reason to pause and consider the possibility of a US-Saudi operation to sabotage Japan’s peace diplomacy and to escalate tensions with Iran. Iran’s diplomats have in fact pointed the finger at US, suggesting that US has likely masterminded yet another ‘false flag.’

The road ahead after US’s ‘pseudo-diplomacy’

Armed with the irrefutable proof of Iran’s complicity in the form of the video in question, the Trump administration is now in the process of gaining traction in its effort to bring its European allies on board over Iran, in light of the statement by the British Foreign Secretary, Jeremy Hunt, that UK stands with its “US ally.”

the US is likely contemplating the military escort of oil tankers, a reenactment of its 1987 role that culminated in a bloody showdown with Iran’s navy, yet knowing that Iran is a much more formidable adversary now and there are serious risks involved, such as with respect to skyrocketing oil prices imperiling the world economy.

The only path to de-escalation of tensions in the region is through diplomacy and, yet, there is no sign that the Trump administration is willing to engage in anything more than a make-believe “quasi-diplomacy” such as giving its nominal blessing to Abe’s Tehran visit without however making any tangible offer that would represent an olive branch toward Iran.

A clue to this “quasi-diplomacy,” on the eve of Abe’s trip, when Iran showed its good will by releasing a foreign spy, the Trump administration reciprocated by imposing fresh sanctions on Iran’s petrochemical industry. And according to the Iranian media, Abe relayed to its Iranian hosts Trump’s request for the release of Americans held in Iran, yet without offering any prisoners’ exchange and the reciprocal release of Iranians in US jails.

Consequently, through a sophisticated web of lies and false flag operations, the stage is being set for another major conflict in Persian Gulf, i.e., another Iraq war in slow motion, with the latest attack on the Japanese tanker clearly showing that US is weary of any undue Japanese role in Persian Gulf affairs and has made sure that Abe’s mission has ended in flames.

Home » Questions About The US Video – OpEd

3 thoughts on “Questions About The US Video – OpEd”