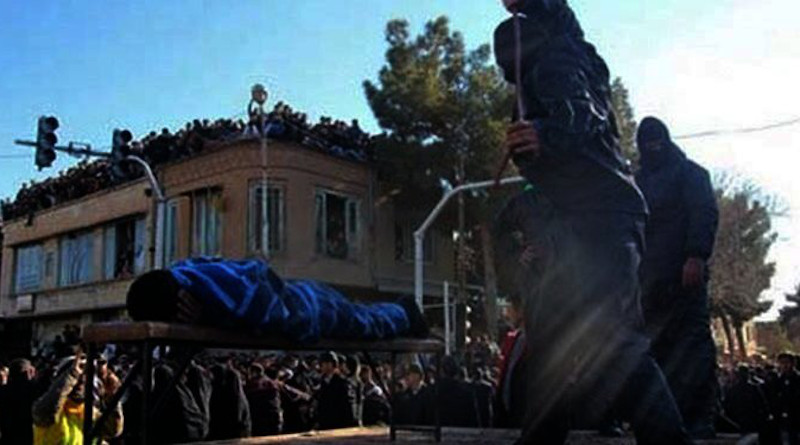 The Iranian regime flogged another political prisoner on Monday, making it the fifth known case in June. According to Javaneha Human Rights website, the flogging sentence for Mohamamd Bagher Souri, detained during the nationwide November 2019 protests was carried out on June 8 in the Great Tehran Penitentiary, also known as Fashafuyeh Prison.

Souri was sentenced to five years of prison and 80 lashes. According to the report, he was lashed 35 times by one of the prison guards. Souri’s back and feet were bruised and injured after the lashing.

On June 8, two men were flogged for taking part in the November 2019 protests in the city of Urmia, northwestern Iran. Azerbaijani rights activists Ali Azizi and Eliar Hosseinzadeh, were lashed 20 times for “disturbing public order”.

On June 5, a man in southwestern Iran was flogged 55 times for criticizing and “refusing to apologize” to the local representative of the regime’s Supreme Leader.

Before that on June 1, a Tehran bus driver and labor activist, Rasoul Taleb Moghadam, was lashed 74 times for taking part in a peaceful Labor Day gathering last year outside the regime’s Parliament.

The Iranian regime is one of the few states that still uses degrading punishments, even though all international civil and political rights conventions have prohibited the use of inhumane punishments such as execution and flogging.

The regime regularly hands out flogging sentences to protesters, dissidents, and to those charged with adultery and theft, among other things. Flogging is a cruel and degrading punishment and is tantamount to torture.