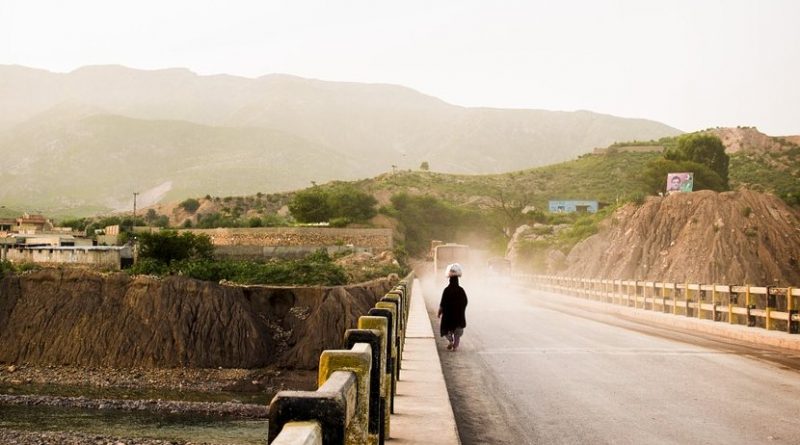 A poor woman in Pakistan.

At least 14 female students, four nurses and four Security Force (SF) personnel, including Quetta Deputy Commissioner of Police Abdul Mansur Khan, were killed and another 27 sustained injuries when unidentified terrorists first blew up a bus of the Sardar Bahadur Khan (SBK) Women’s University in Quetta, the Provincial capital of Balochistan Province, and subsequently carried out a blast inside the Bolan Medical College’s teaching hospital in the city, where the injured were admitted, in the afternoon of June 15, 2013. A remote-controlled device had been planted inside the bus when it was inside the University parking lot. The bomb was set off after the students boarded the bus. SBK is the only University for women in the Balochistan Province.

Moreover, individual woman working for women’s welfare, education and the betterment of their status have been specifically targeted.  Prominent among such incidents were:

March 26, 2013: Shahnaz Nazli (41), a girl’s school teacher was shot dead in Shahkas, near the town of Jamrud in the Peshawar District of KP. She was on her way to the Government girls’ primary school when gunmen fired at her and fled.

October 9, 2012: Tehreek-e-Taliban (TTP) militants shot award winning children’s rights activist Malala Yousafzai in the head on her school bus in Mingora, the headquarter of Swat District, in KP to punish her for her campaigns for the right to education in the militants’ former stronghold of Swat. Another two girls were also injured in the attack on Malala’s school bus.

December 8, 2011: Zarteef Afridi, a coordinator of the Human Rights Commission of Pakistan (HRCP), was shot dead by unknown gunmen in Ghundai area near Jamrod Bazaar in the Khyber Agency of the Federally Administered Tribal Areas (FATA).

Education establishments for Girls are among the main targets of terror, primarily in the tribal areas. According to the European Parliament Resolution on the Discrimination against Young Girls in Pakistan, in Particular the Case of Malala Yousafzai, dated October 23, 2012, “As a result of the conflict with the Taliban, 246 schools (59 girls’ schools, 187 boys’ schools) were destroyed and 763 damaged (244 girls’ schools, 519 boys’ schools) in Khyber Pakhtunkhwa Province, depriving thousands of children of access to education.” The Resolution strongly urged the Government of Pakistan to “address the dangerous and growing trends of violence and discrimination against women and girls and calls on the Government of Pakistan to ensure that all perpetrators of violence against women and children are brought to justice.”

ICM data, which grossly underestimates the magnitude of the problem as a result of the paucity of reliable reportage, records that at least 110 girls’ schools have been blown up in Pakistan since 2006 resulting in the death of at least 56 girls.

On April 15, 2013, the Shura or council of a Taliban faction led by Hafiz Gul Bahadur, in a statement issued in Miranshah, the headquarters of the North Waziristan Agency in FATA, warned minor girls against attending schools: “The movement of young girls and women through streets is against the teachings of Islam and local traditions. Therefore the Shura and the tribal people cannot tolerate it”.

Indeed, the main objective of the Islamist terrorists is to intimidate girls and women in order to exclude them from the public sphere and deny them the opportunities for education. United Nations Educational, Scientific, and Cultural Organization (UNESCO’s) tenth Education for All Global Monitoring Report (EFA GMR) thus observed that, while the school age population of Pakistan was 197.5 million, the net enrolment ratio in primary schools was 74 per cent, leaving 5.1 million children out of school, 63 per cent of whom were girls. The Report also noted that there were 7.27 million adolescents not attending school, of which 3.8 million were female. Further, EFA GMR Director Pauline Rose stated that “since 1999 when governments around the world committed to getting all children into school, countries like Pakistan have managed to consistently fail to address” the issue. “We must put girls first if we’re to crack this challenge. Two-thirds of girls in the poorest areas in Pakistan are still not getting the chance of an education – a rate that is not appropriate for the 21st century.”

Exclusion from educational opportunities is not the only crisis in Pakistan. Across the country, women also face threats and violence in the exercise of their basic right of franchise. The estimated female population of the country is 93,986,578. Out of more than 86,189,802 registered voters in Pakistan, 37,597,415 are women, but only a tiny fraction among them is able to vote. On May 8, 2013, for instance, pamphlets were handed out in Miranshah warning tribesmen not to let women vote in the General Election of May 11, 2013, and threatening punishment for those who did. “Take our words, this kind of disgraceful act will not be tolerated and anyone influencing women to cast a vote will be punished,” the pamphlet, signed by “Mujahedeen” and thrown from vehicles into shops, warned.

Similarly, reports on May 11, 2013, indicated that village elders in Lower Dir District of KP had banned women voting in their respective areas. Elders of Paikhel village in Mianwali District in Punjab also announced a ban on women voting in the village over mosque loudspeakers.

Reports indicated the Pakistan People’s Party (PPP), Awami National Party (ANP) and Jamaat-e-Islami (JI) candidates had also reached an informal agreement to disallow women from voting in general elections for the Lower Dir Provincial Assembly (PA) seat. KP Information Minister Musarrat Qadeem stated, “Yes I can confirm this agreement has taken place in Lower Dir. I have reports of similar agreement from some other areas. But I am sure about Dir agreement and I had already communicated it to the Election Commission as well.” In addition, leaders of the Pakistan Muslim League – Nawaz (PML-N) and JI entered into an agreement in Buner District, (KP), to bar women from casting their votes in the PA constituency. PML-N’s Abdul Hameed and JI’s Afzal Hussain reportedly agreed to bar women from voting at the Topi Polling Station. Moreover, a jirga (elders’ council) in Swat District’s Amankot village decided that the village women would not cast their votes.

Further, on May 11, 2013, at least eight women voters were injured in a blast in Peshawar. Police said a bomb planted on a motorcycle specifically targeted women voters. Shafiullah Khan, a senior police officer, disclosed, “The motorcycle was parked outside a women’s polling station.”

However, the Gender Election Monitoring (GEM) mission, on May 13, 2013, issued its preliminary report on female electoral participation, observing that a large proportion of Pakistan’s women did come out to vote on May 11. GEM Mission Head Sabra Bano observed, “Despite pre-election threats and attacks, a large number of female voters from all age groups showed up enthusiastically to cast their votes.” No specific data on the proportion of female participation was, however, made available.

A rising trend of Islamist extremism and fundamentalism, which underpins the terrorism in Pakistan, has added more to the current deluge of violence against women. A poll conducted by the Thomson Reuters Foundation in 2011 found that Pakistan is the third most dangerous country for women. The poll cited more than a thousand women and girls murdered in “honour killings” every year and reported that 90 per cent of Pakistani women suffered domestic violence. The latest annual report of the HRCP launched on April 4, 2013, noted that at least 913 girls and women were killed in the name of “honour” in 2012. These included at least 99 minors.

The Annual Report of the National Commission on the Status of Women, Amnesty International, 2012, provides a detailed profile of various indicators for the appalling situation of women in Pakistan. The Report states that the Aurat (Women’s) Foundation documented 8,539 cases of violence against women, including 1,575 murders, 827 rapes, 610 incidents of domestic violence, 705 “honour killings” and 44 acid attacks.

According to the World Economic Forum’s Global Gender Gap Report 2012, Pakistan ranked 134th out of 135 countries, among the worst places for women in the world.

Violence, repression and discrimination against women flourish within a context of Government apathy towards women. Significantly, Pakistan’s National Commission on the Status of Women (NCSW) was established as a statutory body only in July 2000, after 53 years of the country’s Independence, and only after Pakistan had committed itself to this measure at various international fora, including the Beijing Declaration and Platform for Action, 1995, and the National Plan of Action (NPA) for Women, 1998.

A range of legal measures have, of course, been initiated by the Government to ‘secure’ the status of women. These include the Muslim Family Laws Ordinance (1961) – primarily dealing with restrictions on polygamy, divorce and child marriage; the Criminal Law Amendment Act, 2004 – known as the ‘honour killing law’; the Protection of Women Act, 2006; the Protection against Harassment of Women at the Workplace Act, 2010; the Criminal Law Act (Second Amendment, 2011) – referred to as the ‘Acid Control and Acid Crime Prevention Law’; the Criminal Law Act (Third Amendment, 2011) – referred to as the ‘Prevention of Anti-Women Practices Law’; and the Domestic Violence (Prevention and Protection) Act, 2012. In 2009, the Land to the Landless model was established by the Government of Sindh Province, which granted land titles to women.

Unfortunately, the rising graph of terrorism and radicalization of the State has divested the country of an environment which is required for the actual implementation of these various legislations and, in turn, to protect the female population. Most of these laws remain on paper, as the country’s enforcement apparatus remains, on the one hand, stretched to its limited dealing with a deluge of terrorism and enveloping crime, and, on the other, indifferent to the plight of women within a society that remains parochial and deeply committed to a religious and political ideology that denies equality to women and seeks to exclude them from the public sphere. It is imperative for Islamabad to provide an environment of peace to secure its women population. Given the undercurrent of Islamist extremism that underpins the entire sphere of politics in Pakistan and Islamabad’s track record of dealing with extremism, it remains highly unlikely that an environment that can ensure a greater measure of security for women will be established in the foreseeable future.