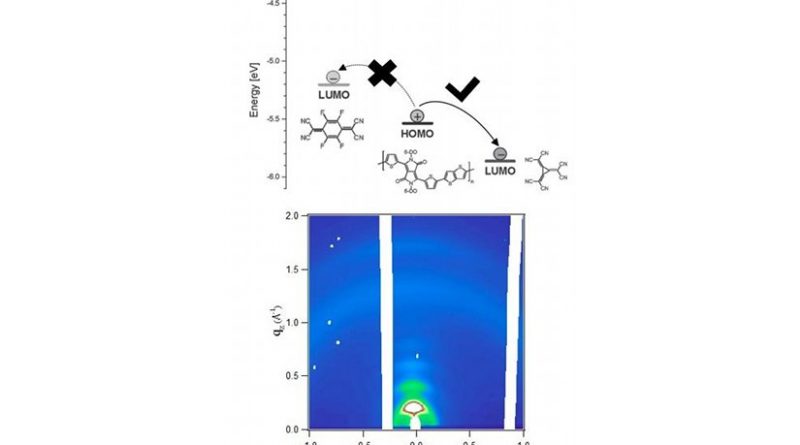 The energy levels of the studied systems and a synchrotron X-ray diffractogram measured on a thin film of an organic semiconductor doped with a derivative of [3]-radialene. Credit: The Lomonosov Moscow Stte University

A team of the Lomonosov MSU researchers in collaboration with their German colleagues from the Institute of Polymer Research in Dresden (Leibniz Institute) managed to find a molecule that, to their opinion, could give the impetus to the development of organic electronics. The results of the work were published in Advanced Materials.

Scientists from the Moscow State University together with colleagues from Germany have found that a derivative of [3]-radialene, a molecule known to the science for nearly 30 years, can be used to create organic semiconductors. Dmitry Ivanov, the Head of the Laboratory of Materials Engineering at the Department of Fundamental Physics and Chemical Engineering, Moscow State University, believes that the achievement will greatly contribute to the development of organic electronics and, in particular, to fabrication of organic light emitting diodes and new classes of organic solar cells.

Organic or “plastic” electronics is a relatively young scientific field, which came to life about 15-20 years ago. Its purpose is the development of electronic devices based on organic materials. This type of devices is yet inferior to the standard silicon-based electronics in terms of performance, and also less durable. But it also has advantages — lightness, thinness, flexibility, transparency, and most importantly — plastic electronics is much cheaper than silicon. The main applications of organic electronics include solar cells, which will be much cheaper than the silicon-based modules (high cost is one of the reasons, which restricts the latter from covering large areas and thus make better use of the sun energy). Also, organic electronics can be used to design organic light emitting devices and field-effect transistors.

The molecule in question is the so-called dopant, whose addition to a semiconducting polymer substantially increases its electrical conductivity. The dopants for inorganic semiconductors are widely used already for decades, however, according to one of the article’s co-authors, Dmitry Ivanov, for organic conductors this field is far less studied. Currently, the most commonly used are fluorinated dopants. In combination with different organic semiconductors they are able to dramatically increase their electrical conductivity, but not all polymers that are used today in the “plastic” electronics are suitable.

‘Together with our Drezden colleagues we decided to design a completely new type of low molecular weight dopant for the organic semiconductor,’ said Dmitry Ivanov. ‘And here it was important to choose a molecule that it was not only suitable in its energy levels, but, importantly, the dopant must be well mixed with the polymer, so that in contact with the polymer it does not segregate in a separate phase, eventually crystallizing and, in fact, losing contact with the polymer’.

The main contribution of Ivanov’s laboratory in this work consisted in exploring the physics of the phase transitions, physics of mixing in such binary systems, in the other words — in finding a suitable candidate in terms of polymer physics.

And such a candidate was found. It happened to be a derivative of [3]-radialene. This is a small planar molecule in which the carbon atoms are connected to form a triangular structure. Among other potentially interesting compounds, [3]-radialene has the most energetically suitable LUMO level, i.e. the lowest unoccupied molecular orbital. This means that with its help the electrons are easily extracted from the semiconducting polymer matrix, becoming free charges and thereby increasing the conductivity of the doped material. [3]-Radialene thus becomes the strongest dopant for the organic semiconductor among those that are known in the scientific literature.

The experiments with the [3]-radialene, also confirmed by the results of quantum-chemical calculations, show that the substance is well mixed with a semiconducting polymer and allows to increase the electrical conductivity of the polymer by several tens and even hundreds of times. It has been found that up to 50 percent of the dopant’s content in the polymer the phase separation does not occur, but the crystalline structure of the polymer is gradually changed. This meant that the dopant molecules are included in the polymer crystalline lattice and form the so-called co-crystal. And the formation of co-crystals, according to Ivanov, is precisely one of the main reasons for the high efficiency of the new compound.

The described new dopant, as well its fluorinated and currently the most popular analogues, belongs to the category of electron-deficient organic dopants, Dmitry Ivanov said. ‘Fluorine substituents are known to strongly pull the electrons away from the central part of the molecule, which increases the whole conductivity of the doped polymer. In the present work, the chemical structure of the dopant is completely different, and, in fact, appears to be even better. Perfect mixing of our dopant with the polymer matrix is, I think, the key to its performance. This could pave the way to fabrication of new organic solar cells with improved characteristics. We also think about production of organic field-effect transistors. I think it will give a significant boost to the development of organic electronic devices.’