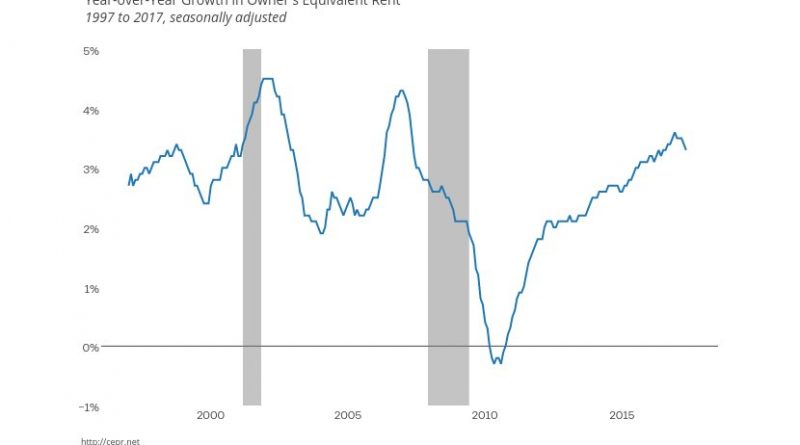 Excluding shelter, the core CPI has been falling in recent months.

Even with the economy at or below most economists’ estimates of full employment, it appears that inflation is slowing rather than accelerating. The overall CPI was flat in June, while the core CPI increased by just 0.1 percent for the third consecutive month. Over the last year, the overall CPI has increased by 1.6 percent while the core index increased by 1.7 percent. This is a clear slowing in both measures, which had been at or above 2.0 percent on a year-over-year basis earlier in the year.

Even this low rate in the core CPI has been driven by inflation in the rental component. The shelter index, which is primarily rent proper and owners’ equivalent rent, rose 0.2 percent in June and has risen 3.3 percent over the last year. A core index that excludes shelter costs was flat last month and has increased just 0.6 percent over the last year. The annualized inflation rate in the core index minus shelter, comparing the last three months with the prior three months is -1.1 percent. In other words, it is only rising rents keeping the core CPI in positive territory.

It is worth looking at rent separately since, like food and energy, it follows a dynamic that is different from the overall CPI. Rents are driven in the short run by the scarcity of housing in desirable locations. In principle more housing can be built, but even in the absence of zoning restrictions there is still considerable lead time between when the need is recognized and the point at which new housing units become available.

The rate of inflation in the owners’ equivalent rent (OER) component had been accelerating gradually since 2010, when it was actually negative. (The OER index is a better measure of pure rents since it excludes utilities that are often included in the index for rent proper index.) It peaked at 3.6 percent on a year-over-year basis in December of 2016 and since then has slowed modestly. The year-over-year increase for June was 3.2 percent. The slowdown is considerably sharper if we compare the last three months with the prior three months. The annualized rate of inflation for the OER over this period was just 2.6 percent.

With even rental inflation now trending downwards, it is difficult to see any major component that could push inflation higher in the immediate future. Inflation in medical care and education, two sectors that have historically been drivers of higher inflation, appears to be well under control. The medical care index has risen by 2.7 percent over the last year, while the education index has risen by just 2.3 percent.

There is also no evidence of inflationary pressures building at earlier stages of production. The Producer Price Index for final demand was up just 0.1 percent in June. The index that excludes food, energy and trade rose 0.2 percent. Both indexes have increased by 2.0 percent over the last year, down from inflation rates earlier in the year.

In short, all the evidence in this month’s price data suggests that inflation is low and heading lower. There appears to be no basis for concern that a tightening labor market is leading to rising inflation.

Home » US Inflation Continues To Slow In June – Analysis