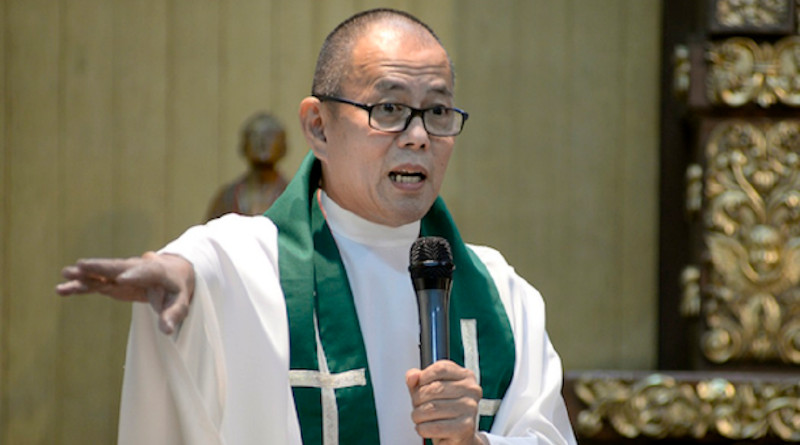 A Catholic priest and staunch critic of Philippine President Rodrigo Duterte fears he is being watched and could be arrested by the government after discovering videos and photos were taken of him and his congregation by police during a Mass in his Manila parish church.

Father Reyes said the discovery was disturbing and had left him fearing for his security and his parishioners.

“Their behavior was very suspicious. If they were on official business, they should have had the courtesy to ask permission,” Father Reyes said in an interview.

Father Reyes is known as the “running priest” for bringing attention to social issues through running.

In 2019, Father Reyes together with two other priests said they had received death threats for speaking out against Duterte’s war on drugs.

Father Reyes openly denounced extrajudicial killings saying they were contrary to the teachings of Christ.

“Not all the victims of extrajudicial killings are hardcore drug addicts and pushers. Many do not even have anything to do with drugs,” the priest said in 2017.

“We must not allow the killings, the murders to continue. We must not fear and with faith stand up, speak up for the sanctity of all life. We take solace, strength and inspiration from the word of God,” he added.

Father Reyes has been in the Duterte administration’s crosshairs ever since.

In 2019, Father Reyes, together with four Philippine bishops and two other clergymen, were accused of sedition and various other crimes.Father Reyes said the charges were “a desperate move to suppress dissent.”

He said it was likely he was under surveillance this time for criticizing a new anti-terrorism law which critics have said contains vague provisions that the government could use to commit human rights abuses.

“I think what they did [taking pictures and videos] was not standard operating procedure. It is an infringement, a violation of the sanctity of the Eucharist,” Father Reyes said.

Father Reyes said they followed the guidelines for religious gatherings set out under anti-coronavirus measures with less than ten churchgoers present at the Mass.

Elmo San Diego, head of the Department of Public Order and Safety said the policemen did not violate any law and were only conducting a “routine inspection” to make sure quarantine protocols were followed.

“There was no need for prior permission. The church is an open and public place. Anyone can come in and observe,” San Diego said in a statement.

He warned that arrests would be made if proper social distancing and health protocols were not observed in churches.

“Next week, we will begin arrests, even if they are priests or imams, if they do not follow the guidelines,” San Diego told a local newspaper.

Father Reyes said that with the new anti-terrorism law coming into effect next week, the arrest of government critics seems likely to happen

“We know how they can easily interpret violations according to their bias and without due process,” he added.

Home » Philippines: Priest Critic Of Duterte Accuses Police Of Spying On Him