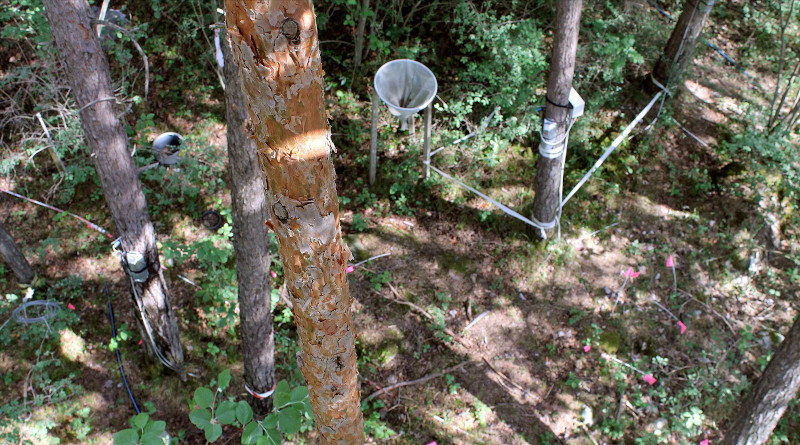 At a research site in the Pfyn Forest (canton of Valais), WSL scientists have been irrigating a number of forest plots since 2003. On some plots, the irrigation was stopped after 11 years. This long-term experiment provides perfect conditions for studying how trees adapt to dry and damp conditions. (Photo: Reinhard Lässig)

Climate change is leading to drier conditions in Valais. For around two decades now, many Scots pines in the canton have been dying, in some cases over large areas. The Swiss Federal Institute for Forest, Snow and Landscape Research (WSL) is conducting an irrigation experiment to investigate the growth of Scots pines in the Pfyn Forest. Since 2003, it has been irrigating a number of plots within the forest to illustrate the dependency of pine growth on an adequate water supply.

The trees, which were first drought-stressed and then irrigated, grew very well for over a decade, developing thicker crowns and stems than their non-irrigated neighbours. At the end of 2013, the water supply was turned off in some parts of the site.

The question was whether the trees could benefit from the ‘years of plenty’ or whether the long period of irrigation had made them less well adapted to the new drier conditions. The answer is multifaceted, as different tree organs responded in different ways. It is clear, however, that pine growth is influenced by past conditions, as the results published by a WSL-led international research group in the journal New Phytologist now illustrate.

One of the expected responses to discontinued irrigation was that newly formed needles grew to a shorter length than in the years when irrigation took place. Surprisingly, however, the length of new shoots did not decrease in the first year, but only in the second year without irrigation.

This is the first indication of a legacy effect, the term used to describe delayed growth responses that can only be explained by past, rather than current, conditions. In other words, some responses do not occur in the next growing season, but only in the season after that, or later still. Trees, it would seem, have some sort of ecological memory.

However, the most remarkable finding was the development of radial stem growth. The mean wood and bark increments of the trees that had stopped being irrigated did not decrease immediately, as expected, but remained significantly wider than prior to irrigation for the next four years.

As well as responding to the external conditions in the air and soil, stem growth also benefited from the resources and structures created during the irrigation phase, even though this had long since ended. The research team was able to rule out any role played by water remaining in the soil from the irrigation period.

The researchers tried to explain the unexpected stem growth using a computational model linking the legacy effects with the lifespans of various tree organs and the carbon reserve. A water-conducting element in the wood of a pine tree remains active for around 50 years, the carbon reserve has a turnover rate of approximately 10 years, and the pine needles live for around four years. Essentially, therefore, tree structures that were formed up to 50 years ago still influence growth today because they carry characteristics of past years into the present.

The lifespan of the needles, and thus the environmental conditions of the past four years, were found to have the biggest influence on stem growth. Four years is also how long it took for the enlarged crowns on previously irrigated Scots pines in the Pfyn Forest to shrink back to their pre-irrigation level.