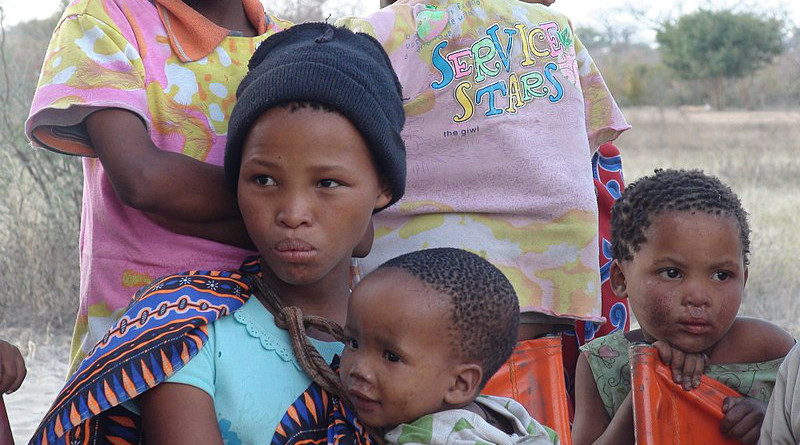 The daughters of a small community of San bushmen living in Namibia. The baby boy is the girl's brother. Photo Credit: Nicolas M. Perrault, Wikipedia Commons

Over the past few decades, San (Bushmen) communities in southern Africa, former hunter-gatherers, have developed new adaptive strategies to cope with climate change, the presence of other groups on their land, and the impacts of globalization.

While San have likely lived in southern Africa for 20,000 to 40,000 years, they remain politically and economically marginalized in relation to other social groups. Such forms of marginalization have been attributed to governance regimes that have dispossessed San groups from their land and livelihoods.

According to a newly published article in the Journal of Anthropological Research, San communities face unprecedented challenges in the era of globalization, as cash-based economies continue to become more prevalent and resource-sharing at the communal level decreases.

In “The Plight of the Kalahari San: Hunter-Gatherers in a Globalized World,” author Robert K. Hitchcock describes how challenges faced by San communities are connected to national-level and international-level legal and developmental frameworks.

In particular, the legal status of San communities varies substantially across three different southern African countries: Botswana, Namibia, and Zimbabwe. In Botswana, where the largest number of San resides, San are not classified as an indigenous ethnic group vis-à-vis other ethnic groups; instead, they are categorized as Remote Area Dwellers, and a Remote Area Development Program (RADP) for these communities exist.

Nevertheless, San livelihoods in Botswana continue to be at risk, because land tenure protections remain weak. In Namibia, the San are recognized as a distinct indigenous group, and a national-level San Development Office dedicated for San welfare was established by the Namibian government in 2007. They are now considered ‘marginalized communities’ along with Himba and Ovatue by the Namibian government. In Zimbabwe, no specific government agency is dedicated to the welfare of the San or other groups, though the Zimbabwe Constitution does recognize people that are defined as ‘Koisan.’

Since the 1970s, Botswana, Zimbabwe, and Namibia have all instituted reforms to land tenure, which resulted in large portions of former tribal lands to be allocated to non-San groups and individuals. As a result, San communities have been displaced from their land in all three countries.

Although some San communities have returned to their ancestral lands after court case victories, as occurred in Botswana San livelihoods continue to be vulnerable after the Botswana government criminalized subsistence hunting in 2014. Hunting rights were restored in 2019 but only for private, citizen and foreign safari hunters.

In Namibia, San groups have been involved in conservancies as a form of community-based natural resources management since 1996. In particular, San communities have enrolled as members of state-sanctioned conservancies, such as the Nyae Nyae Conservancy.

These conservancies allow members to share revenues derived from safari hunting and tourism. Nyae Nyae, Namibia is the only area left in Africa, besides the Hadza area near Lake Eyasi, Tanzania, where local people have the right to hunt for subsistence as long as they use traditional weapons.

The funds that have been made available to Ju/’hoan and !Kung communities have been used to develop gardens and protection facilities for water points. There is also a village schools program that provides San students with mother-tongue language education at the pre-school and primary school levels.

In the past few decades, San communities have gradually reclaimed their ways of life in southern Africa through legal victories at the national level. By mobilizing support for legal advocacy on behalf of San communities, local non-government organizations continue to play crucial roles among the San. Nevertheless, these community-led San organizations continue to face difficulties in obtaining adequate financing. The author of this article admits that “that it is not inexpensive to engage in international and local human rights efforts” San communities continue to call upon their governments and international organizations to recognize their human rights and protect their welfare.

Home » The Plight Of The Kalahari San