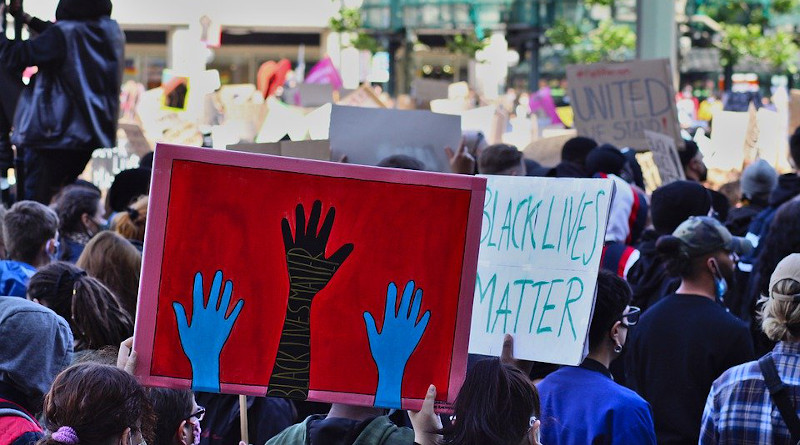 Thanks almost entirely to the killing of George Floyd, Black Lives Matter’s approval rating has more than doubled from where it stood four years ago, surging from 27% in 2016 to 57% today. While the slogan wins public support, the racially tinged socialism espoused by the organization Black Lives Matter should concern everyone who cherishes freedom.

BLM proudly proclaims its belief that all black Americans should receive a guaranteed minimum income and “free” healthcare, schooling, food, real estate, gender reassignment surgery, and abortion; bring an “an end to all jails” as we know them; disrupt the traditional family; demand reparations on behalf of foreign nations; and form a “global liberation movement” that will “overturn US imperialism [and] capitalism.”

Americans could be excused for not knowing that BLM is a political organization with an agenda no less comprehensive than reshaping the entire world. The media have not reported its aims — at least, not in context of the recent riots. In the public imagination, Black Lives Matter is nothing more than a ubiquitous black square on social media platforms. Americans rightly outraged by incidents like the indefensible killing of George Floyd by a police officer with a long history of complaints adopted the slogan to demand proper treatment under the law — one of cornerstones of Western civilization. They often protest to this end and, as long as those protests are peaceful, they are exercising the first freedom enshrined in the Bill of Rights.

However, they have no inkling that “Black Lives Matter” is not just a maxim or a graphic to be posted online. It is a radical pressure group that embraces a vista of controversial, extremist positions. Those who march under its banner are unwittingly putting themselves in a position to be identified by BLM’s activists as endorsing these beliefs.

BLM activists have made no secret of their views. “When we started Black Lives Matter, it wasn’t solely about police brutality and extrajudicial killing,” one of BLM’s three co-founders, Opal Tometi, confessed to The New Yorker. The issue was just “a spark point” to begin “calling for the defunding of police, a moratorium on rent, a moratorium on mortgages and utilities” and issuing “demands” relating to “housing and education and health-care systems.”

To present their “demands” more completely, the Black Lives Matter Network joined dozens of like-minded groups to found the Movement for Black Lives, sit on its “united front,” and adopt its policy platform.

“[T]he U.S. is a country that does not support, protect or preserve [b]lack life,” the M4BL original statement says. “And so we seek not reform but transformation.” While the planks often amount to little more than platitudes, replete with grammatical errors, the platform offers a clear demand for socialism under the cover of racial reconciliation. The steps the organizations propose include:

Reparations through racial socialism: The M4BL platform, which BLM endorses, states, “We demand reparations for past and continuing harms,” including both “corporate and government reparations” for a litany of ills that include “food apartheid” and “racialized capitalism.” Government reparations will take “the form” of “a guaranteed minimum livable income for all Black people.” M4BL/BLM’s “universal health care” policy mandates that “wealthy residents pay for a portion of their services while low-income and working class folks receive free services.” The new system will be modeled on France or Germany. Black Americans will also receive government-funded “control of food sources, housing and land.” Robust reparations programs will include “full and free access for all Black people (including undocumented and currently and formerly incarcerated people) to lifetime education” at any university, community college, or technical education facility, as well as “retroactive forgiveness of student loans.”

Replacing education with agitprop and welfare services: Under the M4BL/BLM manifesto, public schools would be transformed from centers of education to the delivery points of intersectional/multicultural studies and comprehensive welfare programs, including free abortion for minors (without specifying a minimum age):

A constitutional right at the state and federal level to a fully-funded education which includes a clear articulation of the right to: a free education for all, special protections for queer and trans students, wrap around services, social workers, free health services (including reproductive body autonomy), a curriculum that acknowledges and addresses students’ material and cultural needs, physical activity and recreation, high quality food, free daycare, and freedom from unwarranted search, seizure or arrest.

“To ensure an intersectional approach,” the group continues, the public school budgeting process must include “representation from specific populations of people,” including “formerly and currently incarcerated” people.

Defunding the police and ending prisons: BLM’s best-known demand is to “defund the police.” M4BL also proposes an “end” to arrests of any black students, and “an end to all jails, detention centers, youth facilities and prisons as we know them.” House arrest would be promoted equally with imprisonment. The government would also expand Pell grant funding to educate inmates and “[a]llow access to gender affirming surgeries” in penitentiaries at taxpayers’ expense.

Dismantling the family: Black Lives Matter endorses two contradictory policies: “We make our spaces family-friendly,” it states. It then looks forward to the destruction of the traditional family:

We disrupt the Western-prescribed nuclear family structure requirement by supporting each other as extended families and “villages” that collectively care for one another, especially our children, to the degree that mothers, parents, and children are comfortable.

Children raised in fatherless homes are more likely to drop out of school, abuse drugs or alcohol, be victims or perpetrators of physical and sexual abuse, live in poverty, commit other crimes, and go to prison than those raised in intact, two-parent households–the “nuclear family structure” BLM is warring against. Two out of every three black children live in single-parent families, making them 271% more likely to do so than non-Hispanic white children. To leave this out of racial disparities calculations is reckless, as Thomas Sowell has noted. “Without loving families, no society can long govern itself,” says Jennifer Roback Morse, the founder of the Ruth Institute and a frequent collaborator with the Acton Institute. BLM agrees but chooses to outsource much of the parents’ responsibilities to the government.

Start a “global liberation movement” to overthrow capitalism: “The interlinked systems of white supremacy, imperialism, capitalism and patriarchy shape the violence we face,” the M4BL/BLM platform states. “As oppressed people living in the US, the belly of global empire, we are in a critical position to build the necessary connections for a global liberation movement. Until we are able to overturn US imperialism, capitalism and white supremacy, our brothers and sisters around the world will continue to live in chains.”

The BLM-endorsed document adds that its “struggle is strengthened by our connections to the resistance of​ peoples around the world fighting for their liberation. … The movement for [b]lack lives must be tied to liberation movements around the world.” It does not list the foreign “liberation movements” with which it wishes to align. However, they will hold the United States and Israel in contempt.

“America is an empire,” and “American wars are unjust,” the M4BL manifesto states baldly. And “Israel is an apartheid state.” America’s “alliance with Israel” makes the U.S. “complicit in the genocide taking place against the Palestinian people….it makes US citizens complicit in the abuses committed by the Israeli government.” BLM does not state what punishment it would mete out to civilians complicit in “genocide.” However, it demands lawmakers cut “the US military budget by 50%, which will lead to the closure of the over 800 U.S. military bases the U.S. [operates] around the world” and the return of troops deployed overseas — a move many Americans, especially libertarians, support.

Higher taxes, with a specifically racial focus: The group writes confusingly that governments “have increasingly decreased the use of progressive taxation.” As a result, “the wealthiest Americans and powerful corporations continue to evade their fair share of taxes,” it says. The top 1% of U.S. income earners pay 37% of federal income taxes, and the top 10% of U.S. pay 47% of all taxes, while the bottom 44% pay nothing. “Begin by raising the top marginal rate first to 50 percent and then gradually up to 80 percent,” M4BL suggests.

The federal government should focus on “taxing ‘bads’ not ‘goods.’” BLM would increase the death tax, the capital gains tax, impose new taxes on real estate transfers and financial “speculation,” and create a national wealth tax. Each state would follow suit by imposing a heavily progressive state income tax on individuals and corporations and 50 state wealth taxes. All “tax reform legislation” must be drawn up “in accordance with racial equity goals” to “help build the wealth of households of color.”

Reparations for drug dealers: M4BL/BLM would legalize prostitution and the “possession and sale of all drugs, no matter the quantity.” Prisoners convicted of these crimes would be released and their records retroactively expunged. But that’s not far enough for Black Lives Matter: Any government savings “must be invested into reparations to all people who have been adversely impacted by the drug war and enforcement of prostitution laws.” The government “must also ensure that people criminalized by the ‘war on drugs’ are able to participate in legal drug markets where decriminalization has already taken place.” Many libertarians support decriminalizing some or all drugs (and prostitution), but they typically envision government regulations on the manufacture and sale of narcotics. One of their most resonant selling points is that “repeal of drug prohibition will take the drug business out of the cartels’ hands.” BLM would guarantee the Medellin cartel a piece of the action.

This list of policy proposals is far from comprehensive. If anything, BLM’s “demands” are more expansive and government-expanding yet. However, this gives an accurate flavor of the platform Black Lives Matter would implement if given the opportunity. It is not one that should be shared by people of faith or supporters of limited government, unalienable rights, and equal justice under the law.

One thought on “What Does ‘Black Lives Matter’ Believe? – OpEd”