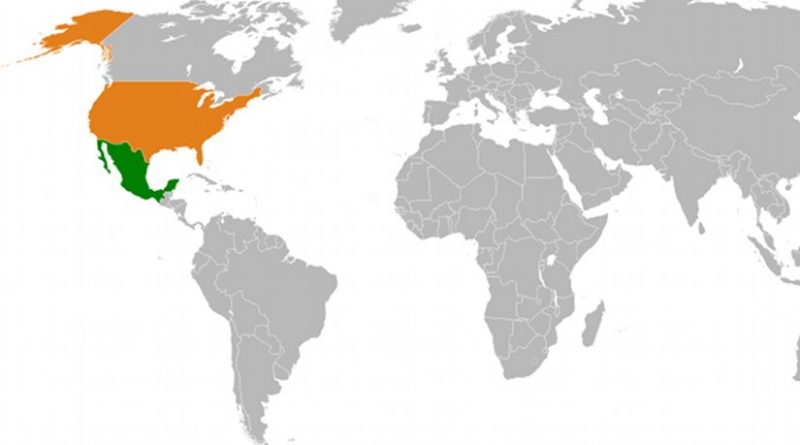 Should the United States and Mexico establish a “special relationship” similar to those the US maintains with Great Britain and Israel? For Samir Tata, an increasingly self-confident and politically active Mexican –American population means that the historical, geographical, demographic and economic case has never been more compelling.

For nearly two centuries, the destinies of the United States and Mexico have been inextricably intertwined, yet nothing resembling a special relationship has developed between these two neighbors. By contrast, the US has crafted enduring, multifaceted special relationships with Great Britain and Israel on the basis of far weaker foundations. The US and Mexico share a 2,000 mile contiguous border. Mexico is the second most important market (after Canada) for US exports. Today, 33.5 million Mexican-Americans represent about 11 per cent of the total US population.[1] It is high time for the United States and Mexico to forge a special relationship.

The legacy of history

The United States realized its “Manifest Destiny” to become a continental power stretching from the Atlantic to the Pacific through the vivisection of Mexico. Within the span of a decade, Mexico lost all of what was then known as Northern Mexico (almost 60 percent of Mexican territory) to the United States by virtue of the annexation of Texas (1844), extensive territorial cessions under the Treaty of Guadalupe Hidalgo (1848), and the Gadsden Purchase (1853).[2]

Shortly after gaining independence from Spain in 1821, Mexico invited American settlers to help develop its northern province of Texas, and by 1830 American settlers outnumbered Mexicans in the province. As the Mexican government tried to stem the tide of illegal American immigrants and assert control over Texas, the settlers revolted, declared independence in 1836 and promptly requested US annexation (which was finally approved by the US Congress in 1844).

When James K. Polk became president in 1845, he moved to assert an expansive territorial claim with respect to the Texas-Mexico border, effectively extending the southern boundary of Texas to the Rio Grande, and ordered US troops to occupy the contested area. In addition, President Polk demanded that Mexico sell its remaining northern provinces of California and New Mexico (both of which had growing number of American settlers) to the United States. [3] Mexico rejected both the Texas boundary claim as well as the demand to sell its remaining northern territories.

Mexico lost the ensuing war and in the Treaty of Guadalupe Hidalgo of 1848 accepted the Texas border claim, and ceded its California and New Mexico provinces to the US for $15 million.[4] The subsequent Gadsden Purchase in 1853 transferred the disputed area along the Mexico-New Mexico border to the US for $10 million. The absorption of the Mexican provinces of Texas, New Mexico and California added a significant Mexican population that nurtured a unique Mexican-American cultural heritage. Indeed, today the areas that straddle both sides of the border have come to be dubbed “Amexica.”[5]

The promise of NAFTA

The North American Free Trade Agreement of 1994 (NAFTA) has helped unleash the economic potential of Mexico and put in place the framework for a North American common market among the United States, Mexico and Canada. These three countries, each of which span the continent from the Atlantic to the Pacific, have a combined population of 472 million people and a combined GDP of $20 trillion.[6] According to the Office of the US Trade Representative, US combined trade (exports and imports) with Canada and Mexico was $1.1 trillion in 2013. [7] More particularly, from the US perspective, US goods exports to Mexico amounted to $ 226 billion in 2013, which, according to statistics compiled by the US Trade Office, was greater than the combined US goods exports to such core European allies as Great Britain, France and Germany ($ 127 billion), the combined US goods exports to such key Asian allies as Japan, Australia and South Korea ($ 133 billion), or the combined US goods exports to the so-called BRIC countries of Brazil, Russia, India and China ($200 billion).

Yet Mexico’s GDP per capita of $15,600 is only about 30 per cent of that of the US.[8] If Mexico is to become a key manufacturing and agricultural hub of North America, and thereby provide employment opportunities for its young and growing labor force, it will have to significantly boost labor productivity and efficiency through major investments in education, health and sanitation, and infrastructure (transportation, power, communications, housing). In addition, Mexico needs to move aggressively to capitalize on its recent liberalization of its energy sector to promote both on-shore shale oil and gas projects, as well as off-shore conventional oil and gas projects. With virtually no political risk, US energy companies have a major opportunity to help revitalize Mexico’s energy sector so that the country continues to be a net energy exporter. The US through bilateral programs targeted to the communities along the Mexican side of the border can help turbo-charge the economic growth of northern Mexico (thereby enabling the Mexican government to devote greater resources to the lesser developed central and southern areas of the country).

There is clearly an opportunity to make a major push to realize the full potential of NAFTA to become a real common market in which goods and services, capital and (eventually) labor can move freely. Accordingly, the US should spearhead an effort to streamline border and customs procedures, conform manufacturing and agricultural standards, and harmonize regulatory frameworks with respect to financial, insurance and medical services. The ultimate goal should be a NAFTA common market so that commerce within the NAFTA area would be as free as interstate commerce is in the US. It is in the vital national interest of the United States to encourage a twenty-first century NAFTA framework so that North America becomes an economic magnet for its European and Asian allies.

Drugs, guns and illegal immigrants pose grave threats to the ultimate national security of both the United States and Mexico, and, therefore, it is in the vital national interests of both countries to cooperate closely in addressing these problems. Absent a special relationship, success is unlikely.

The United States has a serious drug habit which is being fed by Mexican drug cartels. It is estimated that about 9 per cent of the US population has used one or more illicit drugs, primarily cocaine, heroin, opium, amphetamines and marijuana.[9] Except for cocaine (which is produced mainly by Colombian drug cartels and to a lesser extent by Bolivian and Peruvian groups), the other drugs are grown (poppies, marijuana) or produced (opium, heroin, amphetamines) in Mexico under the auspices of Mexican drug cartels. Crucially, the Mexican cartels control the supply and wholesale distribution of externally sourced illicit drugs (including cocaine) into the US.[10] This business is variously estimated to be worth about $20-65 billion annually.[11]

Mexico has a serious illegal firearms problem that is symbiotically linked to the demand for such weapons by Mexican drug cartels. As the Mexican government employed increasingly aggressive tactics, including deploying the army, to crush the cartels, there was correspondingly violent pushback from the drug traffickers. Gun violence associated with drug traffickers resulted in over 100,000 deaths over the past decade.[12] The United States is the primary source of virtually all of the illegal firearms flowing into Mexico. [13]

In the short run, seamless cooperation and joint operations (patterned along the lines of US-UK and US-Israel intelligence cooperation) would significantly increase the likelihood of success against drug traffickers and gun runners. Likewise, close cooperation between Mexican and US banking authorities will be critical in shutting down the cartels’ access to the US and Mexican financial systems.[14] In the long run, the US will have to help finance Mexican government efforts to encourage farmers to grow alternative crops rather than cultivate poppies and marijuana. Ultimately, of course, the US will also have to craft domestic programs that discourage the demand for illicit drugs. [15]

Perhaps the biggest challenge to forging a special relationship is stemming the flow of illegal immigrants into the US from Mexico. Yet, absent a special relationship, this problem is unlikely to be solved. Currently there are about 12 million illegal aliens residing in the US, about half of whom are Mexican citizens. Over the last 2-3 years, net Mexican migration has been near zero as the inflow of Mexicans into the US has been offset by the departure of illegal Mexican migrants (partly due to the extended economic recession in the US and partly through aggressive US deportation efforts). [16] Given current US domestic politics, it is unlikely that the problem of illegal Mexican migrants will be addressed in the context of comprehensive immigration reform.

Although it may seem a bit ironic, the 1848 Treaty of Guadalupe Hidalgo provides a historical precedent for addressing the problem of Mexican residents in the US. Article VIII of the Treaty provided a one year grace period for Mexican citizens residing in the territories ceded to the US to opt for US citizenship or continue to remain in the US as Mexican citizens (in effect as permanent residents).[17] In the absence of exercising such an option, any Mexican citizen remaining in the US at the end of the grace period would be automatically deemed to be a US citizen. The Treaty provided an elegant bilateral solution to what could have become a vexatious problem bedeviling both countries. A special relationship with Mexico would enable the US to address the problem of Mexican migrants bilaterally without the need for comprehensive immigration reform.

The confluence of history, geography, demographics and economics offers a compelling case for a special relationship between the US and Mexico – two neighbors who have been so near yet so far. Indeed, an increasingly self-confident and politically active Mexican-American population (significantly concentrated in the border states of California, Arizona, New Mexico and Texas) will help forge a unique special relationship between two proud countries. It is long overdue.

[9] US Department of Health and Human Services, Results from the 2012 National Survey on Drug Use and Health, September 2013, http://www.samhsa.gov/data/nsduh/2012summnatfinddettables/nationalfindings/nsduhresults2012.htm#highlights

Samir Tata is a foreign policy analyst. He previously served as an intelligence analyst with the National-Geospatial Intelligence Agency, a staff assistant to Senator Dianne Feinstein, and a researcher with Middle East Institute, Atlantic Council and National Defense University.

Home » The US And Mexico: Forging A Special Relationship – Analysis