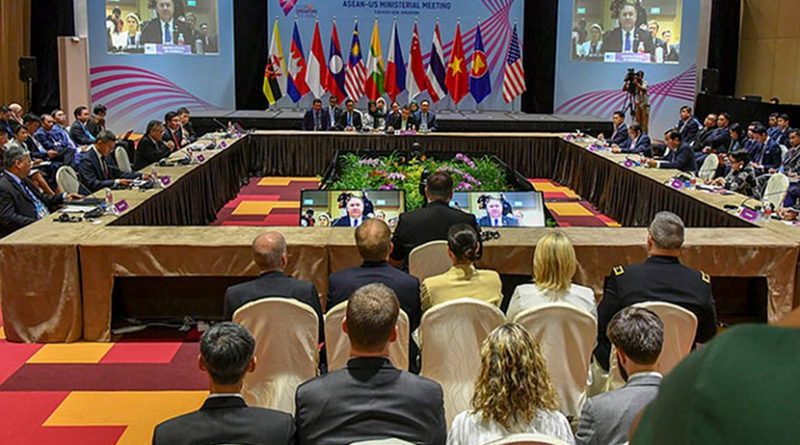 The ASEAN hosted meetings have come and gone and the US-China soft power struggle for dominance in the South China Sea has continued unabated. If anything it has accelerated and expanded.

At the meetings, US Secretary of State Mike Pompeo stated in an indirect but obvious warning to China that Washington was committed to the rule of law there. He then announced what some saw as a token 300 million dollar security aid package to Southeast Asian countries prioritizing maritime security. https://www.business-standard.com/article/international/in-a-bid-to-counter-china-us-pledges-300-mn-for-security-in-indo-pacific-118080400508_1.html China’s Foreign Minister Wang Yi vowed that China would maintain its military presence. He also insisted that the U.S. is “the biggest driving force for militarization in this region”. http://usa.chinadaily.com.cn/a/201808/06/WS5b673ecda3100d951b8c8a97.htm Then as ASEAN and China reached agreement on a draft negotiating text for a Code of Conduct (COC), Australia, Japan and the U.S. jointly called for it to be “consistent with existing international law, as reflected in UNCLOS; to not prejudice the interests of third parties or the rights of all states under international law; to reinforce existing regional architecture; and to strengthen parties’ commitments to cease actions that would complicate or escalate disputes.” Their statement also repeated last year’s implicit criticism of China for its actions in the South China Sea including “coercive unilateral actions that could alter the status quo”. https://www.state.gov/r/pa/prs/ps/2018/08/284940.htm

Some media, politicians and pundits have warned of the coming ‘hot’ conflict between China and the U.S. in the South China Sea. Incidents leading to broader conflict are certainly possible –even increasingly probable –if the two rivals continue their strategic and kinetic collision course. But hot war is unlikely in the near future.  China realizes the superiority of US military might and the U.S. realizes it might not ‘win’ such a war quickly or easily. https://www.lowyinstitute.org/the-interpreter/book-review-pivot-future-american-statecraft-asia-kurt-campbell   Moreover, the possibility of a conflict elevating to the use of nuclear weapons is a powerful mutual deterrent. Nevertheless,  the media focus on and exaggerate the significance of their respective use  of their military assets to show force, engage in psychological warfare and send threatening ‘messages’.  But the more politically important contest is for the hearts and minds of Southeast Asian nations.

‘Soft power’ is the capability to use economic or cultural influence to shape the preferences of others. The ‘soft power’ struggle between China and the U.S. for influence in the region is much more equal in capacity and effect than the U.S. would like.  Indeed, some argue that the U.S. is losing –or will lose. https://www.scmp.com/comment/insight-opinion/article/2120010/why-us-no-match-china-asia-and-trump-should-have-stayed-home

Accordingly, the U.S. has stepped up its offense.  The most recent manifestation was the rescinding of its invitation to China to participate in the US hosted Rim of the Pacific Exercise (RIMPAC)—the world’s largest multilateral military maritime maneuvers.  http://news.usni.org/2018/05/23/china-disinvied-participating-2018-rmpac-exercise.  China was publically shamed and “disinvited” because of its “continued militarization of the South China Sea.” According to US Defense Secretary James Mattis , “China’s behavior is inconsistent with the principles and the purposes of the RIMPAC exercise.” https://www.voanews.com/a/china-downplays-exclusion-from-us-led-naval-exercises/4463072.html.

Some extrapolate that Southeast Asian nations’ participation in RIMPAC demonstrates their “passive support” for the US position in the South China Sea. https://www.cnn.com/2018/06/30/asia/rimpac-navy-exercises-us-china-intl/index.html

This latest soft power punch came against a background of US public condemnation of China’s behavior –in general and in the South China Sea in particular. The US has named China as a “strategic competitor” and a “revisionist” nation. Then Pacific Commander Admiral Harry Harris singled out China “as our biggest long-term challenge.” He warned that “without focused involvement and engagement by the United States and our allies and partners China will realize its dream of hegemony in Asia.”  https://www.cnn.com/2018/05/30/politics/harry-harris-pacific-command-north-korea-china-intl/index.html.  Even more specifically, Harris’ replacement to head the newly renamed Indo -Pacific Command, Admiral Philip Davidson, said in his US Senate  confirmation hearing that Beijing is now “capable of controlling the South China Sea in all scenarios short of war with the United States.” https://www.armed-services.senate.gov/download/davidson apqs 04-17-18 As a grand vision, the U. S. has proposed a ‘Free and Open Indo-Pacific’.  Within this framework the U.S. is proposing – and pushing for – a renewal of the so-called “Quad” – a potential security arrangement among the four large democracies of India, Australia, Japan, and the U.S.

China has launched its own broad soft power initiatives. The most profound is its “One Belt One Road” vision. Its implementation would make—or as some say –revive China’s role as the manager, financier, driver and core of a vast trade and economic system connecting Asia with Eurasia and Europe. As part of this grand plan, Chinese economic investment in the infrastructure of its territorial and maritime neighbors is already benefiting and positively influencing some vis a vis China. This is in part because they desperately need new infrastructure and lack the financing and know-how to build it themselves. Also China and ASEAN have agreed and are now planning the first-ever China -ASEAN maritime exercises to be held later this year in undisputed waters of the South China Sea. China has not invited the U.|S. or Australia and may well imply that Southeast Asian nations’ participation with it in such exercises demonstrates “passive support” for its position there.

The two are also competing to control the political narrative regarding the South China Sea. The U.S. has argued consistently and strenuously to its allies, friends and any others that will listen that China wants hegemony over the South China Sea and that in its pursuit is “militarizing” the features it occupies; bullying its rival claimants; threatening freedom of navigation; violating as well as trying to revise the applicable international law and order; and generating instability.

China has its own narrative. It counters that it is only exercising its right to defend its territory –just as other claimants are doing; that it is not threatening and will not threaten commercial freedom of navigation; that it is willing to negotiate any disputes bilaterally as agreed in the 2002  ASEAN-China Declaration on the Conduct of the Parties in the South China Sea” http://asean.org/?static_post=declaration-on-the-conduct-of-parties-in-the-south-china-sea-2 and to enter into provisional arrangements of a practical nature to harvest resources in the disputed areas (as called for in the UN Convention on the Law of the Sea); and that it is the U.S.—an outsider –that is creating instability with its provocative military presence and UNCLOS -violating intelligence collection probes, and that wants to continue its hegemony of the region –and specifically the South China Sea.

This public soft power tussle is only the tip of an iceberg of intense bilateral lobbying campaigns by both for political support from individual Southeast Asian nations –and ASEAN as a whole. Here China has made great strides with some like Cambodia and Laos, and—much to US chagrin–has made inroads with US allies like the Philippines and Thailand. https://thediplomat.com/2017/08/is-america-losing-the-soft-power-contest-in-southeast-asia/ Brunei, Indonesia. For its part, the U.S. has made progress in drawing its “comprehensive partner” Vietnam to its side and is trying to salvage what remains of its alliances with the Philippines and Thailand.

The soft power locking of horns between China and the U.S. for political supremacy in the South China Sea is intensifying and so is the pressure on the Southeast Asian nations to choose sides. The likely outcome of this contest is not yet clear. China has a geographic advantage in that it will always be a physical part of the region and is an inexorably rising, increasingly assertive, potential friend –or foe.  Meanwhile the U.S.—at least under President Donald J. Trump– has demonstrated inconsistency and generated uncertainty as to its staying power in Asia. Time seems to be on China’s side. This could spell the difference in this seminal struggle for soft power domination of the South China Sea.

This piece first appeared in the IPP Review. https://ippreview.com/index.php/Blog/single/id/769.html