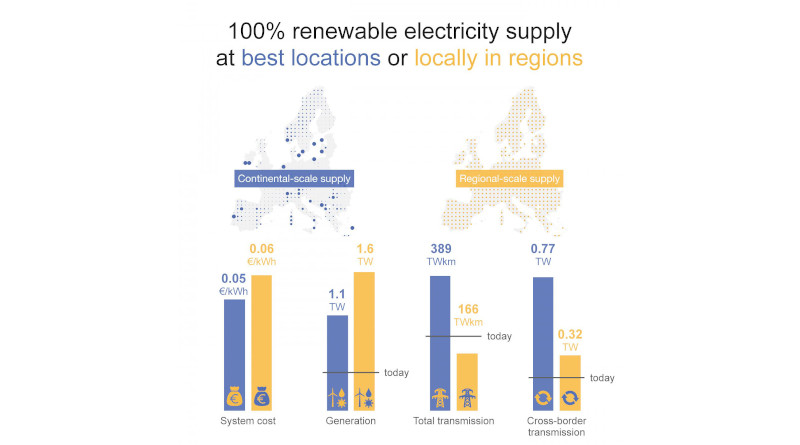 The European Union aims to achieve climate neutrality by 2050 and is relying largely on renewable electricity to reach this goal. The implementation of this energy transition is the subject of heated debate: A continental-scale system that concentrates energy generation infrastructure in the most suitable locations would provide the most affordable solution but many citizens favour smaller, more dispersed supply networks. A new study prepared by researchers in Potsdam and Zurich shows that the implementation of such systems would not incur significant additional costs.

The researchers examined the technical feasibility and economic viability of renewable electricity generation at the continental, national, and regional levels. The study aimed to learn whether smaller electricity supply systems are indeed significantly more expensive than a continental-scale system, explains lead author Tim Tröndle (Institute for Advanced Sustainability Studies, Potsdam/ETH Zurich): “Proponents of a continental system argue that large-scale solutions are more affordable, enable suppliers to balance fluctuations, and facilitate the efficient use of resources regardless of their location. While these advantages are undeniable, political interests and public acceptance play a significant role in shaping the energy transition. As a result, proper consideration must also be given to smaller systems.”

Smaller scale systems incur a cost penalty of less than 20%

Modelling conducted as part of the study confirmed that the most affordable solution would involve the creation of an interconnected European grid to distribute electricity generated at locations across Europe with the best solar and wind resources. But the cost penalties incurred by smaller systems remain low if suppliers are able to balance fluctuations in electricity generation across countries and regions. In this case, grid operators can cooperate with partners at the national and regional levels to balance fluctuations by sharing electricity with neighbouring grids rather than deploying costly storage technologies or curtailing electricity generation from wind and solar plants.

The creation of a well performing European energy market could reduce cost penalties incurred by small-scale systems to below 20 percent compared with a continental supply system. According to the authors, this finding supports current efforts to establish a European electricity market and expand the network of cross-border interconnectors linking national systems, which help to balance fluctuations.

According to the study, the location of electricity generation infrastructure does not significantly affect the cost of a completely renewable electricity supply. “However, location significantly impacts infrastructure choices, especially with respect to the question of whether more generation or transmission infrastructure is required. In light of this, the preferred size of power generation systems should be clarified quickly in order to accelerate the energy transition,” recommends co-author Johan Lilliestam (IASS Potsdam/University of Potsdam).