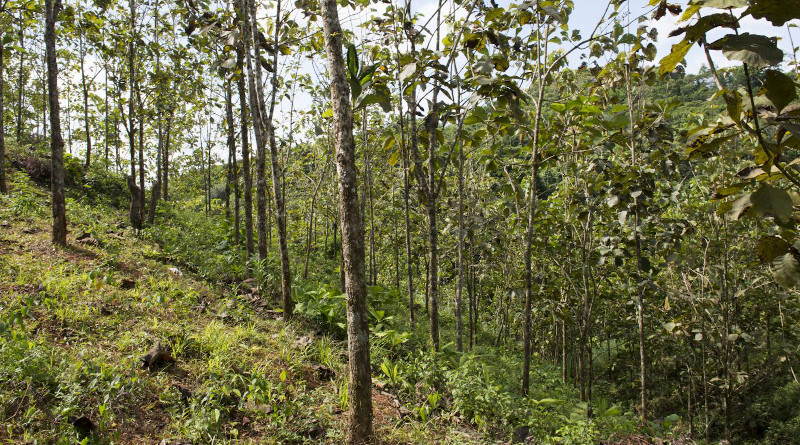 Native to India, teak is the go-to species for reforestation in Central America. But teak often underperforms in the nutrient poor soils that dominate tropical landscapes. To discover if the timber value of teak plantations grown on poor soils can be increased, scientists at the Smithsonian Tropical Research Institute interplanted rosewood and amarillo, both economically valuable native tree species.

Native trees are well-adapted to local environmental conditions, resisting diseases and insect pests. Rosewood (Cocobolo, Dalbergia retusa) is typically sold to instrument makers and craftspeople for a higher price than teak is sold for. Rosewood trees also improve the soil by pulling nitrogen gas out of the air and converting it into fertilizer for itself and neighboring trees. Despite its timber value, rosewood is rarely cultivated and is more often poached from protected areas.

Although amarillo (Terminalia amazonia) is highly valued in Panama as a hardwood tree that grows fast and straight in conventional planting conditions–even in full sun–it has never been formally tested in mixtures with teak and rosewood.

Previous studies predicted that other tree species might not grow among teak trees because teak needs so much water and the roots produce chemicals that may impede the growth of other plants.

As part of the Smithsonian’s 700-hectare Agua Salud Project, the largest reforestation experiment of its kind, researchers planted 30 hectares of teak in 2008. Evaluations in 2013 and 2016 confirmed that teak did not do well in Central Panama’s nutrient-poor, clay soils.

To improve the profitability and environmental services of the plantation, scientists planted rosewood and amarillo seedlings among the teak trees in 2015. Although researchers added a handful of organic matter and a handful of NPK fertilizer to each seedling as it was planted, far less time and labor was involved than in the establishment of the teak plantation. They measured the seedlings in 2016 and again in 2017.

Virtually all of the rosewood seedlings survived across the site, despite several El Niño events that made this the driest period on record since 1925. Rosewood seedings seem to outperform amarillo seedlings initially, but the trees are predicted to catch up and surpass rosewood as time goes by, based on previous experiments.

“Amarillo will end up being bigger in stature than rosewood, but because of its incredible monetary value, the smaller rosewood will far surpass amarillo in terms of financial returns,” said Katherine Sinacore, a post-doctoral fellow working on this species at STRI. “The idea that smaller is better, or in this instance massively more valuable, can be counterintuitive.”

Along with the potential to better protect jaguars, migratory birds and other animals by increasing diversity at this continental crossroads, interplanting is also likely to improve water management, critical for the operation of the Panama Canal because both flooding and drought threaten canal infrastructure and transport of goods. While teak grown alone may not increase the “sponge effect,” the ability of soils to absorb more water during storms and release it during dry periods, interplanting teak with native tree species may increase this valuable ecosystem service.

“Forestry research is often a waiting game,” said Jefferson Hall, STRI staff scientist and director of the Agua Salud project. “Because it takes a long time for trees to grow, researchers plant trees and then wait many years to get results. We were delighted to find that rosewood and amarillo are growing and surviving just as well here at two years as they did in open-grown plantations.”

In the future, researchers also will set up experiments to better understand how underground factors such as nutrient and water availability contribute to the success of interplanting with native trees.

“Exotic species like teak dominate timber plantations throughout Panama and the tropics worldwide,” said Abigail Marshall, first author and graduate student at the University of Montana. “Our hope is that the early success of rosewood and amarillo interplanted in the Agua Salud Project’s teak plantation will contribute to growing evidence for a strategy to increase the use of native tree species in the region and more broadly.”