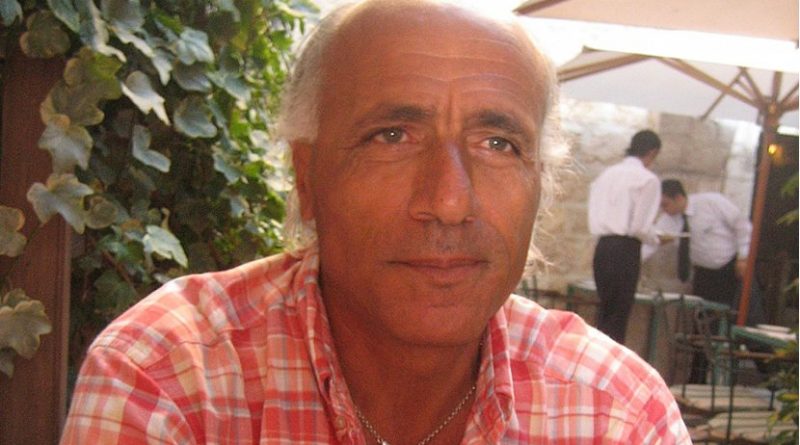 Mordechai Vanunu was imprisoned in Israel for eighteen years because he blew the whistle on Israel’s secret nuclear weapons program. He felt he had “an obligation to tell the people of Israel what was going on behind their backs”  at a supposed nuclear research facility which was actually producing plutonium for nuclear weapons. His punishment for breaking the silence about Israel’s capacity to manufacture nuclear weapons included eleven years of solitary confinement.

Donald Trump promised to “deny the Iranian regime all paths to a nuclear weapon.” But it is Israel, which possesses an estimated 80 nuclear warheads, with fissile material for up to 200, which poses the major nuclear threat in the region. And Israel is allied to the nation with the world’s largest nuclear arsenal: the United States.

Israel doesn’t acknowledge its nuclear arsenal publicly, nor does Israel allow weapons inspectors into its nuclear weapons facilities. Along with India and Pakistan, Israel refuses to sign the nuclear non-proliferation treaty. And it has used conventional weapons in numerous destabilizing wars which include aerial bombing of Gaza, Lebanon and the West Bank.

Vanunu, designated by Daniel Ellsberg as the “the pre-eminent hero of the nuclear era,” helped many people envision nations in the region making progress toward a nuclear weapons-free Middle East.

In fact, Iran’s Minister of Foreign Affairs, Jawad Zarif, spoke eloquently about just that possibility, in 2015, holding that “if the Vienna deal is to mean anything, the whole of the Middle East must rid itself of weapons of mass destruction.” “Iran,” he added, “is prepared to work with the international community to achieve these goals, knowing full well that, along the way, it will probably run into many hurdles raised by the skeptics of peace and diplomacy.”

Significantly, since the “Joint Comprehensive Plan of Action” pact with Iran was concluded in 2015, the International Atomic Energy Association has steadily verified Iran’s compliance with inspections. Iran has accepted around-the-clock supervision by IAEA officials. What’s more, “Iran has gotten rid of all of its highly enriched uranium,” according to Jessica Matthews, writing for the New York Review of Books. Matthews continues:

It has also eliminated 98 percent of its stockpile of low-enriched uranium, leaving only three hundred kilograms, less than the amount needed to fuel one weapon if taken to high enrichment. The number of centrifuges maintained for uranium enrichment is down from 19,000 to 6,000. The rest have been dismantled and put into storage under tight international monitoring. Continuing enrichment is limited to 3.67 percent, the accepted level for reactor fuel. All enrichment has been shut down at the once-secret, fortified, underground facility at Fordow, south of Tehran. Iran has disabled and poured concrete into the core of its plutonium reactor—thus shutting down the plutonium as well as the uranium route to nuclear weapons. It has provided adequate answers to the IAEA’s long-standing list of questions regarding past weapons-related activities.

What do the Iranians think of the U.S. government?  Ordinary Iranians might well think that whatever discontent they have with their own government the U.S. is their most implacable and most immediate enemy. Invective like Trump’s recent words could be a precursor of disastrous invasion.  Many Iranians remember the U.S.-backed coup that ended their democracy in 1953, and they remember the fierce U.S. support given to Saddam Hussein in the brutal eight years of the Iran-Iraq war.

Noam Chomsky rightly names the U.S. Shock and Awe attack against Iraq as the greatest destabilizing force at work in the Middle East. “Thanks to that invasion,” writes Chomsky, “hundreds of thousands were killed and millions of refugees generated, barbarous acts of torture were committed — Iraqis have compared the destruction to the Mongol invasion of the thirteenth century — leaving Iraq the unhappiest country in the world according to WIN/Gallup polls. Meanwhile, sectarian conflict was ignited, tearing the region to shreds and laying the basis for the creation of the monstrosity that is ISIS. And all of that is called ‘stabilization.'”

Trump’s record of statements and of cabinet appointments suggests that regime change in Iran is a long-term goal.  Despite his close Saudi ally’s massive involvement in funding and fomenting terrorism, Trump’s evolving strategy for the Middle East strangely emphasizes Iranian impacts on the region, particularly regarding the conflict in Yemen.

Yemen is entering conflict-driven famine, with a correspondingly lethal cholera outbreak, making it the worst of the region’s “Four Famines,” now widely recognized as collectively the worst starvation crisis in the 72-year history of the United Nations. “In Yemen,” says Trump, “the IRGC, (the Islamic Revolutionary Guard Corp), has attempted to use the Houthis as puppets to hide Iran’s role in using sophisticated missiles and explosive boats to attack innocent civilians in Saudi Arabia and the United Arab Emirates, as well as to restrict freedom of navigation in the Red Sea.” It is Saudi Arabia and its UAE ally, with crucial U.S. backing, that have been intensely bombing Yemen since 2015 and maintaining a punishing Red Sea blockade against shipments often vital to famine relief. “The Saudi-led coalition’s ships are preventing essential supplies from entering Yemen,” according to an October 11, 2017 Reuters report. The report goes on to assess the dire consequences, for Yemen, caused by blocking and delaying ships carrying food and medicine. It documents many cases in which vessels were thoroughly searched, certified not to be carrying weapons, and still not allowed to enter Yemen.

In a time when 20 million people face starvation, it’s particularly obscene for any country to pour resources into nuclear weaponry. Mordechai Vanunu took extraordinary risks and endured incredible suffering to rescue the human species from the foolhardiness of building and maintaining nuclear arsenals. I wonder if people worldwide can rise to a level of courage and seriousness needed to simply recognize, and then, where possible, act in response to the world’s real threats. Within the U.S., can several decades of U.S. government bipartisan lying about Iran be overcome with saner, more humane narratives? Can the threat of U.S. invasion be lifted long enough to allow Iran’s people a window for once again considering democratic reforms? Silence about these issues seems ominous. But silence can be broken.

We have Vanunu’s courageous example. Let’s not waste the precious time we have in which to follow it.