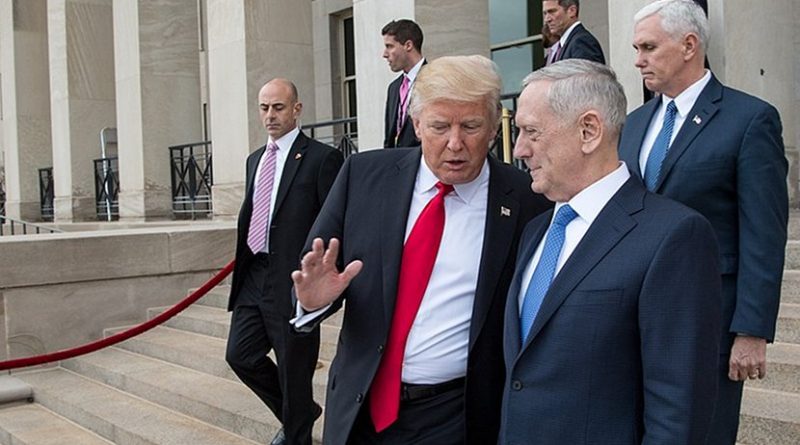 (RFE/RL) — U.S. President Donald Trump says he does not know whether Defense Secretary James Mattis is planning to step down, but he told a TV interview that he sees the four-star general as “sort of a Democrat” who just might leave.

“It could be that he is [leaving],” Trump told CBS television’s prerecorded 60 Minutes program that was to air later on October 14.

“I think he’s sort of a Democrat, if you want to know the truth. But General Mattis is a good guy. We get along very well. He may leave. I mean, at some point, everybody leaves,” he added, according to transcripts released by the TV network.

Trump, a Republican, also alluded to potential changes more generally in his cabinet.

“I’m changing things around. And I’m entitled to. I have people now on standby that will be phenomenal,” he said.

“They’ll come into the administration, they’ll be phenomenal.”

Mattis is considered one of the most independent members of Trump’s cabinet, but also one of the steadiest hands amid an administration marked by a high turnover rate among top officials.

On October 9, Trump announced that Nikki Haley would be leaving her post as UN Ambassador at the end of the year. No reason for the resignation was immediately given.

Many saw the timing of her departure as suprisiing, coming just a few weeks before midterm elections.

Among the other high-level departures were Secretary of State Rex Tillerson, was fired in March, and national security adviser H.R. McMaster, who resigned the same month.

Mattis has been regarded by many as a counterweight to the president. He has pressed to improve relations with traditional U.S. allies, including fellow NATO members, amid often-harsh language by Trump.

Some Western leaders have also praised Mattis for pushing for a tougher policy toward Russian President Vladimir Putin in the face of Trump’s stated desire to improve relations with Moscow.

Speculation has risen about Mattis’s future as defense chief since a book by journalist Bob Woodward about Trump’s White House said the general had questioned Trump’s judgment, likening his understanding to that of a 10- or 11-year-old child.

Mattis denied making the remarks and has consistently denied he was considering quitting.

“Of course, I don’t think about leaving,” he told reporters in September. “I love it here.”