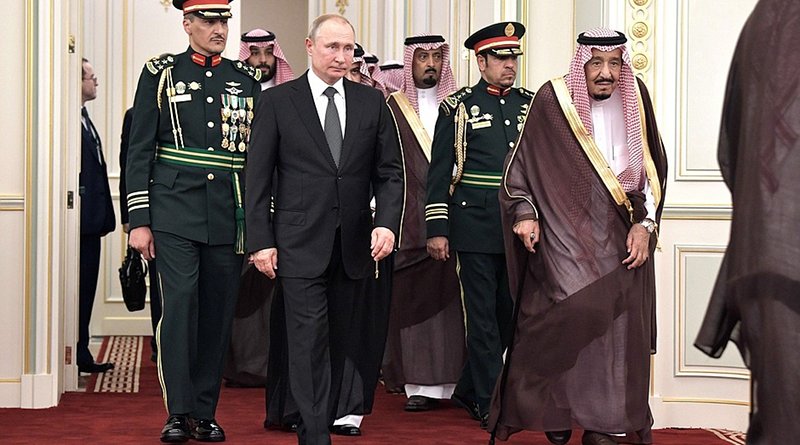 The atmosphere at Al-Yamamah Palace was bright and congenial. Saudi Arabia rolled out the red carpet to demonstrate the importance of the guest, President Vladimir Putin of Russia, his entourage, and the visit itself — his first in 12 years.

Among those awaiting Putin’s arrival at the royal court was Kirill Dmitriev, chief executive of the Russian Direct Investment Fund, which is Russia’s sovereign fund. Dmitriev was recently honored by Saudi Arabia with the King Abdul Aziz Order of Merit. Also in attendance was Saudi Arabia’s Ambassador to Moscow, Rayed Krimly, who, in an interview with this newspaper yesterday, rightly described the Kingdom’s relations with Russia as “stronger today than at any time in the past.”

As President Putin walked beside King Salman, the clear hints and suggestions of how much improved relations between the countries could achieve were apparent to all. As the Russian leader himself acknowledged: “Without the participation of Saudi Arabia, it would be impossible to ensure a sustainable solution to any of the problems of the region.”

Riyadh and Moscow may have different points of view on how some of these regional problems may be resolved, but there is no question that talking about these differences, and working closely to find mutually acceptable solutions, is a far better strategy than not doing so.

Stronger cooperation between the two oil-producing countries will also stabilize energy markets, which is crucial not just for Saudis and Russians, but for the whole world.

As the state banquet concluded and business went on, it was clear with every memorandum of understanding (MoU) signed that the visit was proving to be a turning point in bilateral relations.

Of course, there is still much ground to cover, but we are now beginning to see the fruits of the diplomatic efforts put in by King Salman and Crown Prince Mohammed bin Salman over the past four years. With every visit the king or the crown prince made to Russia, more and more differences were put aside.

During the talks in Riyadh with his Russian guest, King Salman appreciated the active role of Russia in the region and the world, and said Saudi Arabia was looking forward to working with President Putin at all times to achieve security, stability and peace, confront extremism and terrorism, and stimulate economic growth.

He said the pacts that were signed, especially in the field of energy, would have great advantages for the interests of the two countries and their peoples.

During their meeting, the Russian leader and the crown prince expressed their commitment to cooperation. They also discussed Yemen, with the Saudi crown prince expressing his appreciation of Russia’s support for Yemeni unity and a political solution.

The indication of where bilateral relations could head was seen clearly in the number and significance of the agreements signed.

They included one on enhanced cooperation among oil-producing countries, and a declaration of intent by the Saudi Space Commission and the Russian space agency Roscosmos to cooperate in manned space flights and satellite navigation systems. There was a draft MoU for cooperation in the cultural field, another on granting visitors’ visas to citizens of both countries, a draft MoU for cooperation between the two countries’ health ministries, and another on increasing exports of Russian food products to Saudi Arabia. In addition, Saudi Aramco agreed on nine MoUs with major Russian companies as part of Saudi Aramco’s upstream strategy.

As for any Russian-Saudi differences in opinion, there is no question that they still exist, but as Saudi ambassador Krimly put it in his interview with this newspaper: “Areas of common interests and cooperation are expanding, while areas of differences are shrinking.”

• Faisal J. Abbas is the editor in chief of Arab News Twitter: @FaisalJAbbas

Home » The Russian Czar At The Riyadh Palace – OpEd