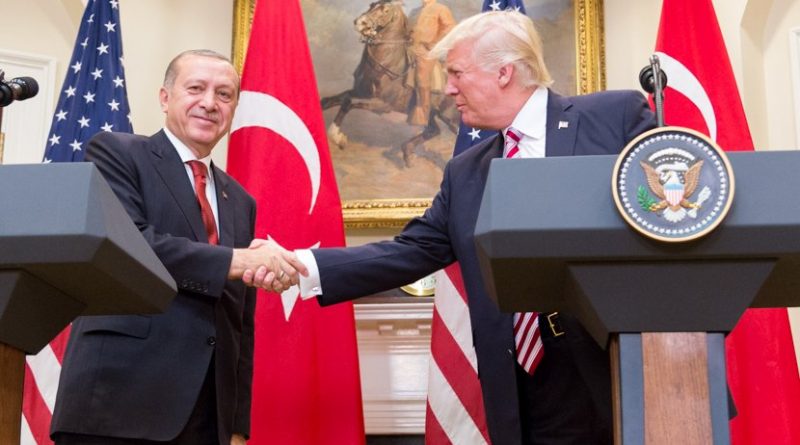 (RFE/RL) — U.S. Vice President Mike Pence has said that President Donald Trump called for an immediate cease-fire in Syria during a phone call with Turkish President Recep Tayyip Erdogan whose military a week ago invaded the northeastern part of the country.

Pence said Trump had been stern with Erdogan on the phone and the vice president said he would soon travel to the region in an effort to mediate the crisis that has seen more than 160,000 civilians flee their homes in the area.

“The United States of America simply is not going to tolerate Turkey’s invasion in Syria any further. We are calling on Turkey to stand down, end the violence and come to the negotiating table,” Pence told reporters as quoted by Reuters.

Pence’s imminent travel announcement came a few hours after Trump said he would soon issue an executive order authorizing sanctions against Turkey’s officials, end negotiations with Ankara on a $100 billion trade agreement, and boost tariffs on Turkish steel to 50 percent in response to the country’s offensive on northeastern Syria.

“I am fully prepared to swiftly destroy Turkey’s economy if Turkish leaders continue down this dangerous and destructive path,” Trump said in a statement on October 14, after the United States, the Syrian Kurds’ main ally, announced it would withdraw troops from the country.

Earlier in the day, Syrian government forces started to reach positions in the north of the country after Damascus agreed to help Kurdish militias facing the Turkish assault.

Turkey launched its operation a week ago, after Trump decided to withdraw forces from outposts in northern Syria where U.S. troops have been stationed for years.

In his statement, Trump said the roughly 1,000 U.S. troops he had ordered to leave Syria will remain in the Middle East to prevent a resurgence of the Islamic State (IS) threat.

He also confirmed that a small number of troops will remain at a base in southern Syria.

Troops also reached Tel Tamer and Ain Issa to the east of the river, two towns located on a strategic highway running south of the Turkish border, reports said.

Syrian Kurdish leaders say the Moscow-brokered deal with President Bashar al-Assad’s government centers for now on Syrian troops deploying along the border and the two sides will discuss politics later.

“After the Americans abandoned the region, and gave the green light for the Turkish attack, we were forced to explore another option,” senior Kurdish official Badran Jia Kurd said.

“This is a preliminary military agreement. The political aspects were not discussed, and these will be discussed at later stages.”

At least 160,000 civilians have fled their homes because of the Turkish offensive, UN Secretary-General Antonio Guterres said in a statement urging an “immediate de-escalation.”

At a meeting of EU foreign ministers in Luxembourg, the 28-member bloc condemned “Turkey’s military action which seriously undermines the stability and the security of the whole region.”

However, the EU stopped short of imposing an arms embargo. Several European states, including Germany and France, have already suspended arms exports to Ankara.

Speaking during a speech in Baku on October 14, Turkish President Recep Tayyip Erdogan slammed the EU and Arab League for their criticism of Turkey’s operation, and said Ankara would not back down from its offensive “no matter what anyone says.”

“We are determined to continue the operation until the end, without paying attention to threats. We will absolutely finish the job we started. Our battle will continue until ultimate victory is achieved,” Erdogan said.