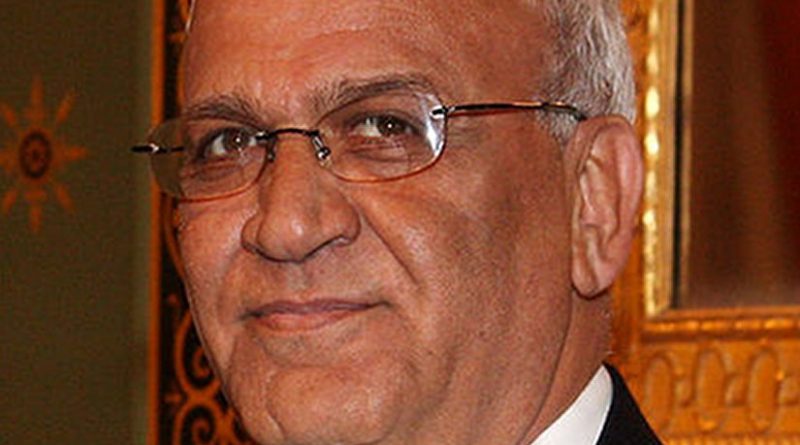 World Jewish Congress President Ronald Lauder’s visit to Ramallah this week to meet with Palestinian President Mahmoud Abbas was a significant event that underscored the reality that there are many Jews and Israelis who genuinely wish to achieve peace with the Palestinians.

Lauder, who I interviewed last month following the signing of the historic Abraham Accords between the UAE, Bahrain and Israel, is the perfect person to help bring the Palestinians and Israelis together. During the Arab News interview, Lauder said he believed the Abraham Accords would open the door to peace.

The Palestinians should build on the Lauder visit and reconstruct their relations with Israel, which reached a pinnacle in 1993 before rapidly declining following the assassination of Yitzhak Rabin in 1995. They have descended on a frightening trajectory into an abyss of violence, fear and uncertainty.

It was not just what Lauder said that impressed me as we spoke for 30 minutes, it was also his demeanor and genuine feelings for peace. Everyone speaks about Lauder’s visit being an opportunity for Abbas and the Palestinians to step out of the box they have been forced into.

Last week, Saeb Erekat, the chief negotiator for the Palestinian Liberation Organization, complained about those who have criticized Abbas’ rejection of the current peace efforts. He stated on Twitter (in Arabic): “The Palestinian leadership is a failure and must be changed, and the Palestinian people are ungrateful and hateful. Why: Because it refused to have the Al-Aqsa Mosque and Jerusalem under Israeli sovereignty, because it refused settlement and annexation, and because it defends the Arabness of its land and sanctities, a people who offered hundreds of thousands of martyrs and wounded and a million prisoners, then it is accused of treason.”

First of all, Twitter may be a good place to promote things, but it is a horrible place to express any opinion. The limitation on the length of posts causes people to edit thoughts down to the basics, meaning they often convey the wrong message or impression.

I know Erekat. We met in Jericho in 1995, when I led a delegation as national president of the Palestinian American Congress. We found ourselves being berated, lectured and scolded for “interfering” in Palestinian affairs. Erekat scoffed that Palestinian Americans should “stay out” of the fight for Palestinian justice, brushing aside the diaspora and a powerful alliance that could have strengthened his weak and ineffective leadership.

It is clear from last week’s tweet that Erekat is expressing the frustrations shared by many in the Abbas administration that their actions have been judged unfairly. Well, with all due respect, the Palestinian leadership is not a failure because of the suffering the Palestinians have been forced to endure during 72 years of an oppressive and brutal occupation: It is a failure because Erekat and other leaders rely on emotion and rejectionism to respond to Israel’s many media lies.

Mr. Erekat, you should be everywhere the issue of Palestine is discussed, whether you like the discussions and plans or not. You can’t hide behind our Palestinian suffering because the diaspora has suffered just as much as you.

You ran from the media at the opening of the UN General Assembly last year. I was there as officials representing nearly every member state stopped to speak to advance their views, while you rushed past, brushing us aside with your hand, frightened of the news media, like a deer in the headlights.

As government leaders, you deserve criticism not just for failed policies but also for failing to convey conviction. You are not an inspiration to the Palestinian people at all, despite your suffering and ours.

This is not just about having new elections or changing government leaders. Hamas, which has partnered with the most extreme elements like Hezbollah, Iran, Qatar and Islamic Jihad, has been far worse than the Palestinian Authority in pursuing salvation for the Palestinian people. Elections won’t bring change. The problem is deeper than that.

Achieving Palestinian-Israeli peace is not an easy task, but it deserves your 100 percent effort and engagement, not your personal emotions. It deserves your strategic thinking, not your knee-jerk anger.

You need to do a better job of bringing the diaspora together. You should reach out for support from all Palestinians, including those who serve in the Israeli Knesset. Most of all, you need to do a better job of strategic communications. I have previously written about the need to provide your most eloquent spokesperson, Hanan Ashrawi, with an effective communications budget. She has achieved so much on a wing and a prayer; imagine what she could do with a professional PR budget and staff?

You need to do a better job of conveying to the world the truth, the facts and the deep desire of the Palestinian people for a fair and just peace. You haven’t done any of that. Your administration needs a radical change in policies and strategy, not a further radicalization of the Palestinian movement.

Abbas and Erekat either need to get their act together to achieve a lasting peace or get out of the way.

Home » Palestinian Leadership Needs To Get Its Act Together – OpEd