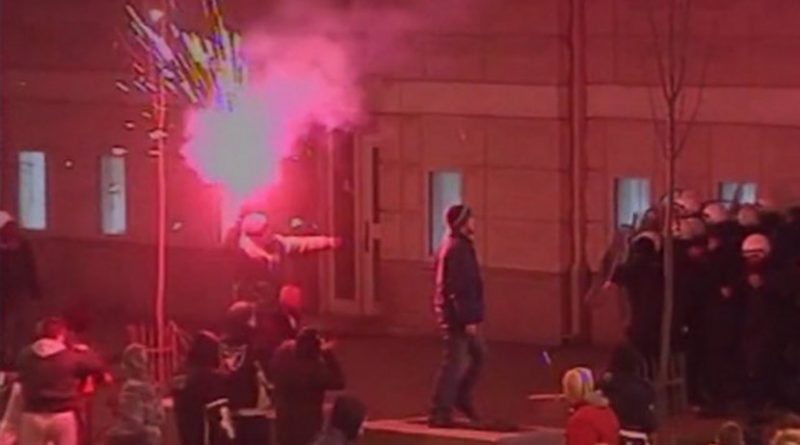 Four men were given suspended sentences for setting fire to the US embassy in Belgrade at a protest that broke out in 2008 after Kosovo declared independence from Serbia.

The Higher Court in Belgrade on Tuesday found four men guilty of torching the US embassy during the ‘Kosovo is Serbia’ protest in February 2008, and gave them suspended prison sentences.

They will only serve prison time if they commit a crime in the next two years.
Three more people – Djordje Tomin, Nikola Kosanovic and Filip Backovic – were acquitted due to lack of evidence.

At the first trial in 2015, nine men received suspended sentences ranging from five to ten months, but the court of appeals threw out the verdict saying it was “contradictory”.

The embassies of the US, Germany and Croatia were attacked on February 21, 2008, in the riots that broke out after Serbia’s former province of Kosovo declared independence, sparking anger from nationalists.

After converging on the embassy of the US, Kosovo’s main ally, enraged crowds tried to storm the building, throwing various lighted objects and smashing doors and windows. One man, Zoran Vujovic, aged 20 from Novi Sad, died in the blaze.

The US and German governments have also called on Serbia to prosecute those who allowed the attack to happen despite a heavy police presence.

Both governments said that finding the perpetrators was one of the top priorities for the Serbian government, while Berlin warned Belgrade on several occasions that its EU integration progress depended on the investigation results.

The working group’s report was completed in 2014, and several police generals were questioned in 2015 about its findings. No further action has been announced.

Other suspects are believed to be senior state officials connected to the office of the prime minister at the time of the unrest, Vojislav Kostunica.