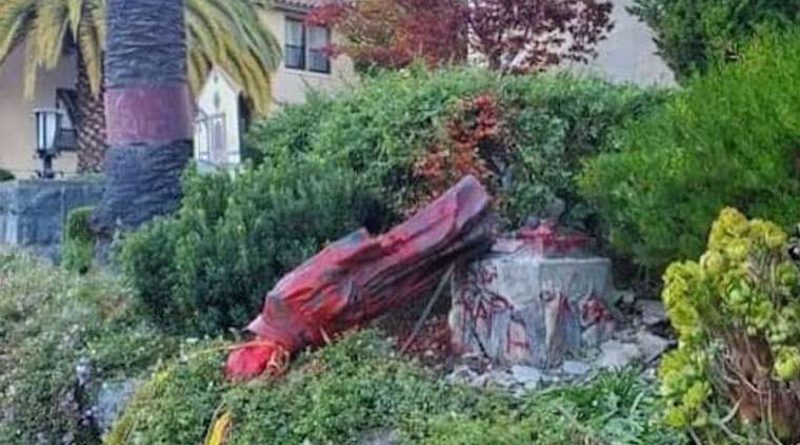 A statue of St. Junipero Serra, which was defaced and torn down by protesters Oct. 12, at Mission San Rafael Arcangel in San Rafael, California. Courtesy photo.

“This is a breakthrough moment for Catholics,” Cordileone said in a statement Friday.

He said the decision to prosecute five people on felony vandalism charges “represents the first time that any of the lawbreakers attacking statues of St. Junípero Serra and other acts of vandalism on Catholic Church property across California will be held accountable for their actions in a court of law.”

The archbishop said he hopes the charges “contribute to putting an end to attacks on all houses of worship.”

On October 12, a group of activists defaced a statue of St. Junipero Serra, at Mission San Rafael Arcángel in San Rafael, CA, which was on private property.

Though Serra himself did not found Mission San Rafael, it owes its existence to Serra’s legacy, as he founded the first nine missions in what would become California.

A church maintenance worker had covered the statue in duct tape before the protest to protect it from graffiti, and boarded up windows at the mission. Numerous statues of the saint have been vandalized or destroyed this year, most of them in California.

The masked rioters peeled off the duct tape and sprayed red paint in the statue’s face.

“The crime was caught on video,” Cordileone said in his statement. “The lawbreakers came prepared with ropes, chisels and spray paint, clearly indicating forethought in committing this crime. If crimes like these are not punished, then the government is telling mobs they get to decide what symbols Catholics and other faiths may display.”

Cordileone had been calling for the prosecution of those who had carried out the vandalism.

While people may disagree about Serra’s legacy, he said, “mobs do not get to trespass on other people’s holy grounds to destroy their sacred symbols.”

Father Luello Palacpac, pastor of San Rafael Parish and Mission, said his parishioners wholeheartedly support the call to prosecute those responsible for the vandalism, which he described as a “traumatic experience” for them.

Serra, an 18th-century Franciscan priest and missionary, is viewed by some activists as a symbol of colonialism and of the abuses that many Native Americans suffered after contact with Europeans.

However, experts have disputed claims that Serra was in any way involved in genocide, and in contrast, there is evidence that Serra advocated for the rights of the indigenous people in the face of mistreatment by the Spanish military.

A California archeologist, who has studied the missions for over 25 years, told CNA earlier this year that it is clear from Serra’s own writings that he was motivated by a missionary zeal to bring salvation to the native people through the Catholic faith, rather than by genocidal, racist, or opportunistic motivations.

“Serra was a man on a mission,” Dr. Ruben Mendoza, an archeologist and professor at California State University-Monterey Bay, told CNA.

“He was absolutely determined to engage the salvation of indigenous communities. And while for some that may be seen as an intrusion, for Serra in his time, that was seen as one of the most benevolent things one could do— to give one’s life over to others, and that’s what he did.”

Born on the island of Petra Mallorca in Spain in 1713, Serra joined the Franciscans and quickly gained prominence as both a scholar and professor.

He chose to give up his academic career to become a missionary in the territory of New Spain, in which Spanish colonizers had already been active for over two centuries.

Traveling almost everywhere on foot and practicing various forms of self-mortification, Serra founded mission churches all along the coast— the first nine of the 21 missions in what is today California.

Many of the missions would form the cores of what are today the state’s biggest cities— such as San Diego, San Francisco, and Los Angeles.

In many ways, the missions were a communal venture between the friars and Native leaders, Mendoza said. Soldiers were typically housed in a garrison just off-site from the compound. The compound itself would include work areas, such as a blacksmith’s shop and places for crafts and weaving.

The Europeans taught the Natives new agricultural techniques, as well as instruction in the faith, performing thousands of baptisms.

Serra specifically advocated for the rights of Native peoples, at one point drafting a 33-point “bill of rights” for the Native Americans living in the mission settlements and walking all the way from California to Mexico City to present it to the viceroy.

Mendoza said the worst abuses against the Native Americans in California took place after the age of the missions ended, when the Spanish government ceased sending funding to the 21 sites and to the Spanish military.

The soldiers, without the support of their faraway benefactors, began to prey on the missionaries and the Natives. Many more Natives died during this time than had in the 60 years that the missions were operational.

The California gold rush in the 1840s saw hundreds of thousands of European settlers come to the area, with little to no protections afforded to the Natives.

While many Native peoples did suffer horrific abuse, Mendoza said many people conflate the abuses the Natives suffered long after Serra’s death with the period when Serra was alive and building the missions.

Pope Francis canonized Serra in 2015 during a visit to the United States.

“Junípero sought to defend the dignity of the native community, to protect it from those who had mistreated and abused it,” the pope said in his homily at the Mass of canonization.

Statues of the saint have this year become focal points for protests and demonstrations across California, with images of the saint being torn down or vandalized in protest of California’s colonial past. Nationally, rioters have targeted Catholic churches and statues of Jesus and Mary.

Rioters pulled down and defaced a statue of Serra in Sacramento on July 4.

Some California institutions, such as the University of San Diego, have put their statues of Serra in storage to protect them.

On July 11, a fire being investigated for arson gutted the 249-year-old Mission San Gabriel in Los Angeles, a mission church founded by St. Serra.